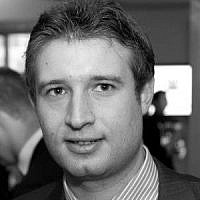 The Blogs
Joshua Koonin
Apply for a Blog
Advertisement
Please note that the posts on The Blogs are contributed by third parties. The opinions, facts and any media content in them are presented solely by the authors, and neither The Times of Israel nor its partners assume any responsibility for them. Please contact us in case of abuse. In case of abuse,
Report this post.

Israelis like to reminisce about a new gone generation of leaders. Begin, Sharon, Rabin, Golda, Peres, and Ben Gurion to name a few. Leaders who put the state above themselves.  One event perhaps encapsulates this more than any other, at least in the mind of many Israelis – Yitzhak Rabin’s dignified 1977 from the Prime Minister’s Office.  More than anything else, these leaders are perceived to have acted with dignity and to have held to their word.

The death of Shimon Peres was seen as a tragic watershed – the end of an era, the last of the old leaders. The founding fathers had left us. Never again would a leader with these values arise.

In the last year, Benny Gantz has campaigned on two slogans – “Israel before all else” and “we have to move forward”.  The decision that Gantz took on Thursday was difficult. Disbanding his Blue & White alliance means that he is vulnerable – theoretically at least, Netanyahu can now head back to the polls. Gantz has effectively decided to serve (at least for a year and a half) under a man who called him, among other things, “insane”. Gantz hopes that he will serve as Prime Minister for a period, but it will be short and he will struggle to win re-election, especially if the skilled Netanyau sticks around.

Israel is in a time of crisis, and in times of crisis, unity has and should win the day.  The decision that Gantz took was likely not his best political move. However, it’s a decision which echoes old leaders in times of crisis. In 1967 Eshkoel, Begin, and Peres put differences aside and formed a national unity government. In 2001, so too did Peres and Sharon.

On Thursday, Gantz did what he promised through his election campaigns – he put Israel first and after a year of paralysis, he moved the country forward.  He will likely face personal consequences. However,  when all is said and done, Israel may have found a new leader of old.