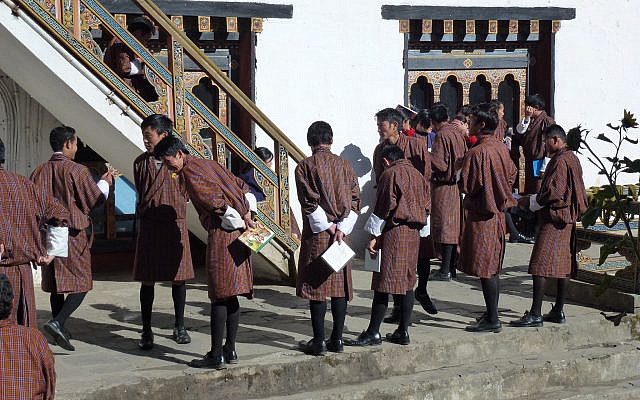 Much is being made of the normalization of relations with Bhutan. But we should not get too excited about this small kingdom where a privileged few keep the population under tight control. It is, in fact, a racist dictatorship.

Bhutan is very proud of its “Gross National Happiness” index, a play on the more usual GDP, Gross Domestic Product index. I visited Bhutan a few years ago and found the reality to be somewhat different. There was no shortage of unhappy people.

Bhutan has taken the unusual step of limiting the number of tourists it allows to visit. It claims that its principle of “High Quality, Low Volume” is designed to preserve the ‘special’ nature of the kingdom. However, in practise, a “high quality tourist” is simply a wealthy tourist. Visiting Bhutan involves paying high prices for just about everything.

In fact, Bhutan has little to offer the tourist. There are, indeed, some spectacular views of the Himalayas and a few rather quaint Dzongs. These massive fortresses, with towering walls surrounding a complex of courtyards, temples, administrative offices, and monks’ accommodation, can also be found in India’s Sikkim province or Chinese-controlled Tibet.

Tourists cannot travel around the kingdom on their own. Only pre-paid guided package-tours are allowed. You are always under the watchful eye of your guide.

A mixture of highly successful public relations and making perfectly normal tourist activities “forbidden” has created a totally unwarranted mystique that attracts many more tourists than the country is worth. A Buddhist form of Yesh Me’Ayin – Something from Nothing.

Take, as an example, the Burning Lake in the Tang Valley. Among the several unlikely legends told about this unimpressive patch of water is the Underwater Temple. If you can get past the souvenir stands and the ‘washing lines’ hung with coloured cloths, and stare into the depths of this puddle there is an amazing temple. Unfortunately, believe it or not, it can only be seen by a true believer. I was unable to see the temple but assured myself that this was not a lack of belief, only a sign from above that I needed a new pair of glasses.

Religious Jews should know that they will not be allowed to wear a kippa. While the locals are forced to wear strange costumes when visiting any government institution, tourists must also follow dress regulations. I ran foul of the guards on a warm day at a Dzong when I wrapped my red jacket around my waist. Only Bhutanese men are allowed to wear the traditional kera, a woven red cloth belt, wound tightly around the waist. The guards were extremely unpleasant, no way would they tolerate other peoples’ traditions.

A welcoming sign at the entrance to the Dzong read: ORDER – OTHER THAN DRATSHANG, NO BODY IS ALLOWED TO USE DRATSHANG’S TOILET. Well drat me.

To sum up, Bhutan has very little to offer the tourist but has many aspects of government control over a subjugated populace that would definitely appeal to our prime minister, Benjamin Netanyahu. He might look good wearing a red cloth belt.