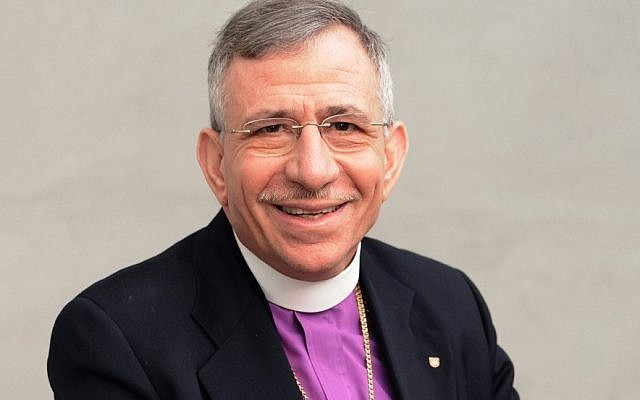 Not much is heard these days about Palestinians who pursue peace. This doesn’t make the headlines, nor even the back pages anymore. The mainstream media have proclaimed the political peace process dead, but they don’t report on efforts at peace-building on other levels, especially in the areas of education and religion, which are actually going on all the time, often quietly without much fanfare.

One of the leading Christian peacebuilders in Jerusalem–and internationally–is Bishop Emeritus Dr. Munib A. Younan of the Evangelical Lutheran Church of Jordan and the Holy Land. He is not only the first Palestinian to hold this high position, but he is also the first Palestinian Lutheran to serve as President of the World Lutheran Federation, which he did with great distinction for 7 years. Recently “retired”, Bishop Younan spent several months last year lecturing in Lutheran colleges and universities in the USA.  He remains an activist for peace through his speaking and writing in Israel, Palestine and throughout the world.

Bishop Younan was one of my main partners in dialogue on the local level in Jerusalem for many years. Together and for more than ten years, we co-moderated a dialogue group which we called “the Jonah Group”. The group was comprised of local Christians whom he would bring from the Armenian, Catholic, Anglican, Lutheran and Greek Orthodox churches, and Jewish clergy (rabbis) and educators whom I would invite from the diverse Jewish denominations in Jerusalem, including Modern Orthodoxy, Conservative/Masorati Judaism, and Reform/Progressive Judaism. Through this dialogue, we became more than colleagues–we became friends. He calls me on major Jewish holidays like Rosh Hashanah and Pesach to wish me a happy holiday, and I reciprocate on Christmas and Easter. In addition, he and his wife attended the wedding of our youngest daughter and we attended a wedding of one of his daughters.

Over time, Bishop Younan later became one of the founders and main leaders of the Council of Religious Institutions of the Holy Land.  This council, which was founded in late 2007 with the objective of helping to resolve the Palestinian-Israeli conflict through dialogue, is  comprised of Muslim, Jewish, and Christian members. The council promotes an atmosphere of mutual respect and tolerance through vigilance against inflammatory and hateful speech and encourages the government of Israel and the Palestinian National Authority to continue working towards a resolution of the ongoing conflict. Some of the council’s major initiatives included a media monitoring project, dialogue and training program for young religious leaders, and a comprehensive joint review of Israeli and Palestinian school textbooks. The organization has also developed a universal code of conduct on holy sites and registry of attacks on holy sites.

In a recent interview with me, Bishop Younan spoke personally about the work of this council:

The study that we did on the Israeli and Palestinian school textbooks revealed how much needs to be done in the future to change the education about each other on both sides of the conflict.  And the development of a code of conduct regarding holy sites was another major cooperative step which will be important for future generations.

Throughout his career, Bishop Younan has believed that it is important to keep the dialogue going at many levels, from the grassroots to the higher levels of religious and political leaders. In all of his work, he has been an active proponent of interreligious dialogue for the sake of peaceful coexistence. As a result, it was no surprise to me that he was granted the Niwano Peace Prize. Upon presenting the prize to him, Rev. Nichiko Niwano, the Honorary President of the Niwano Peace Foundation, said:

As a strong believer in the power of dialogue, you have persistently worked to create space where people of different faiths can meet in peace and develop mutual trust.

In his acceptance speech, Bishop Younan said that leaders of all faith traditions should confront the extremists in their midst through a witness of robust moderation, rejecting that extremism is somehow the measure of faithfulness. As one of the leading moderates among Christian religious leaders in Israel, he added:

Moderates are not wishy-washy. The moderate is a not a person without identity. If we are going to challenge extremist theologies and the extremist policies they support, we must reclaim the center within our respective traditions.

Many people have given up on peace in Israel and Palestine. In a recent interview, I asked him why he persists, what motivates him to go on as a religious person, does he still have hope, and if so, how does he maintain it? His answer was immediate and to the point:

I am hopeful. Why? I believe that God is operating in history.  There are many examples of peace coming about in recent history. Who would have imagined that the Berlin Wall would fall? Who thought that apartheid would end in South Africa? I believe in a living God. In this country—which I believe is a holy land—God will not allow the conflict to go on forever. I believe that God will intervene in time. This is what gives me hope.

In addition, he has expressed the view that ministers and rabbis and imams can influence their people for peace through their teaching and preaching, as he has done in his church –the Church of the Redeemer in the Christian Quarter of the Old City of Jerusalem—for a long time, and as he has done internationally wherever he has preached and lectured, as President of the World Lutheran Federation, and even now in active retirement. “I plant seeds for peace wherever I go,” he told me.

As he looks towards the future, Bishop Younan believes fervently that religious leaders at all levels have to engage the political leaders more, for peace. This is difficult now because the governments are not listening. But in the years ahead, when the Israeli and Palestinian and international politicians will finally negotiate about Jerusalem, as they will need to do, they will need to pay heed to what the religious leader have to say.