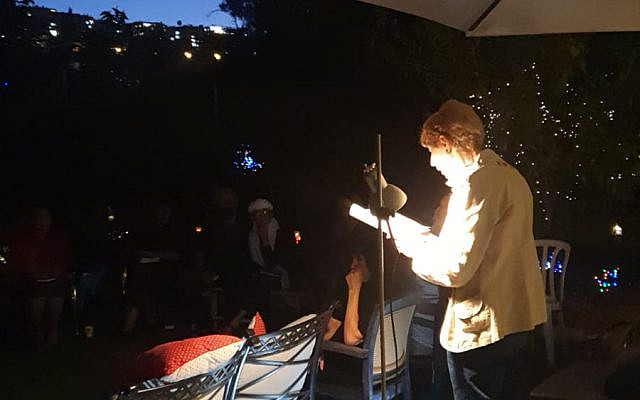 The author reading out her contribution

A few years ago, after I stopped being a translator, became a writer and had several novels under my belt, I finally allowed myself to apply for membership of the IAWE – the Israel Association of Writers in English. I was overjoyed when I was accepted and allowed to pay my membership dues.

But then Corona came along, and there were no more meetings, at least not in person, and it seemed a trifle daunting to confront my fellow-members through the medium of Zoom, so I remained cut off from my new community for two or three years.

When a call went out from the editor of the Association’s quarterly newsletter for material related to writing – no longer than 360 words —  I was ready, willing and able to jump in with a contribution about my effort to convert my first novel, ‘The Balancing Game,’ into an audiobook. It already existed in paperback and ebook form, and since the word on the publishing network was that audiobooks were the thing to go for, I went for it.

Easier said than done, and my travails in attaining that objective are still under way. But the subject of this blog post is the event that marked my entry into live IAWE events. It was advertised as ‘A Celebration in the Garden,’ and was due to be held in the Jerusalem garden of one of our fellow-members. The evening program would give members the opportunity to read from work that had appeared since Corona began.

Of course, I was eager to present myself and my work to my fellow-members, and spent some time deliberating and eventually deciding which passage of my latest book, ‘Rootless in Zion,’ to read. We were told to bring friends along, and also to bring books to sell to our colleagues.

At the set time on the appointed June evening, accompanied by husband, sister and grown-up granddaughter, I turned up toting books in the hopes of being able to sell some. The weather was balmy, our hosts had prepared seating around a lawn of artificial grass for some thirty participants and our kind hostess had baked brownies and other goodies.

As participants trickled in we introduced ourselves to one another, pleased to see so many kindred spirits. Finally, just as the light was beginning to fade, the compere (who was not the host) decided that it was time to begin. To my surprise and, I must confess dismay, he announced that the proceedings would focus at least at first on those participants who had contributed to ‘Arc,’ the Association’s annual journal. ‘Arc’ is a very professionally-produced and intelligent publication containing contributions from members. Most of the contents of the two editions I have seen (2021 and 2022) are impressive, but since I write neither poetry nor short stories, to date I have not sent in a contribution of my own. The brief contributions requested by the quarterly newsletter are a better fit to the kind of essay I write.

As the evening wore on and more contributors to ‘Arc’ read out poems they had written, the Jerusalem night descended, bringing cold air and darkness, as well as the distant sound of sirens from emergency vehicles. The patience of the other participants, myself included, was beginning to wear thin, and it was only after thinly-disguised grumbling was discerned that the compere’s attention turned towards ‘the others,’ namely, the relatively unknown members who had not contributed to ‘Arc,’ but had written and published work in the relevant period.

Finally, my turn came, and I was able to stand up and read out a passage from my recent novel. I did my best to project my voice so that everyone could hear me, and to make the part I had chosen sound interesting. I was given a polite reception when I stepped down, although my nearest and dearest had reservations about the passage I had selected, claiming that it was inappropriate for that particular audience.

More people read poems. No one other than me seemed to have written prose. The chill of the Jerusalem night induced our host to bring out blankets in which to wrap the shivering audience. As a grand finale our host recited by heart the fifty-two stanzas of the poem he had written that combined the obscure with the obtuse, displaying pyrotechnical linguistic ability and a breadth and depth of knowledge on subjects too numerous to mention.

No one showed any real interest in any of the books on sale.