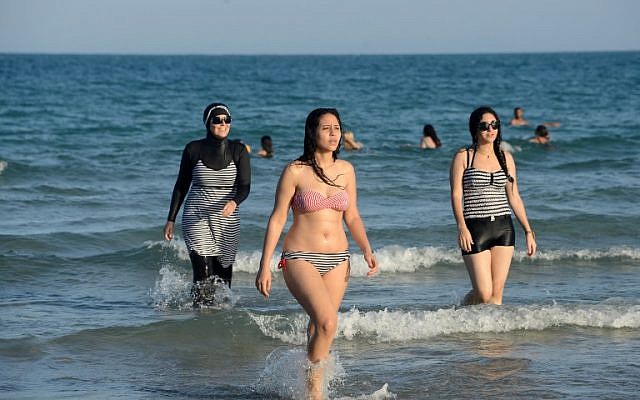 Women on beach with one, left, wearing a burkini, a full-body swimsuit designed for Muslim women. (AFP/FETHI BELAID)The debate launched this summer in France over the Burkini is not causing such a stir in North Africa where the Islamic swimsuit is uncontroversial as the dress-code on the beaches has become increasingly prudish. / AFP PHOTO / FETHI BELAID / TO GO WITH AFP STORY BY AMAL BELLALOUFI WITH AFP CORRESPONDENTS IN RABAT AND TUNIS 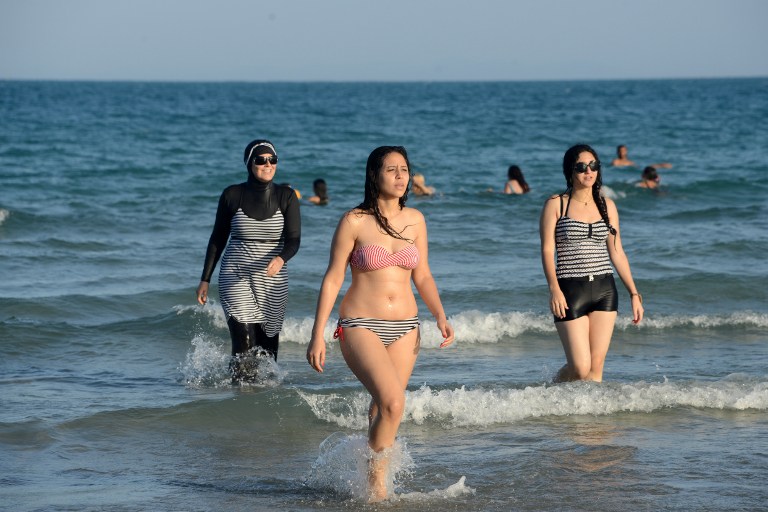 Women on beach with one, left, wearing a burkini, a full-body swimsuit designed for Muslim women. (AFP/FETHI BELAID)

I was appalled when I heard that one of the leading rabbis in France, the rabbi of the Great Synagogue of Paris, Moshe Sebbag, had come out in support of the sweeping prohibition on wearing a bathing suit that meets the Muslim dress code, known as a ‘burkini’. The situation escalated to the point where this week French police took the despicable step of forcing women to undress on public beaches. Their “crime” was simply dressing in the only way that allows them to feel comfortable on the beach while also adhering to the code of modesty they follow.

The key reasons the rabbi gave for supporting the prohibition are in order to maintain the secular character of France, and to address the fear that any symbol of Muslim religiosity causes the French in the wake of recent terror attacks.

It seems that Jews in Europe as well as other decent people are forced to choose between standing up for the basic values of European civilization, such as freedom of religion, respect for women and respect for the other, and taking a forceful stand against terror. It is deeply saddening that they feel themselves caught in such a bitter dilemma.

But it is a false dilemma. Curbing public expressions of religiosity will not reduce the danger of terror. Fears can not really be allayed by forbidding signs of religiosity in public. Failing to differentiate between taking legitimate security measures and exploiting the irrational fears that terror creates is a blow against the basic values of the French Revolution, which promised not only freedom from religion but also freedom for religion. The absurdity goes beyond all proportions when a prominent rabbi helps compel a Muslim woman to either undress or to find herself a private pool to swim in, when he knows very well that she doesn’t have the economic means to do so.

This is a case  of secular dogmatism playing on the fear that religion elicits and using that fear to trample a woman’s dignity. It is clear that there is no connection between this and security. Dogmatism of this kind destroys the possibility of building a shared, inclusive, multi-cultural and respectful Europe. We will not create a better future by surrendering to fear nor by coercing people to follow either religion or secularism.

Christians, Jews and humanists should all stand firm with Muslims in this struggle.