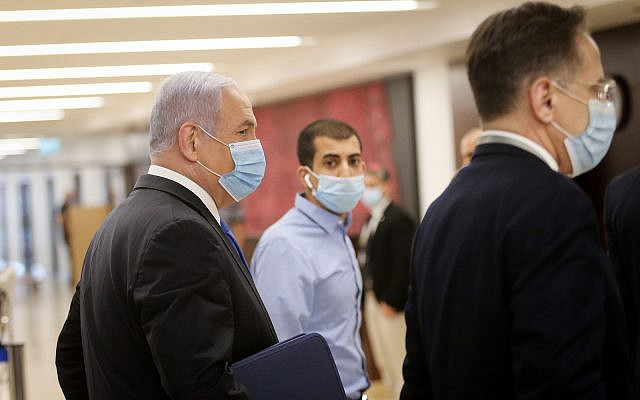 Prime Minister Benjamin Netanyahu walks in the Knesset after presenting the 35th government of Israel to the Knesset, May 17, 2020. (Alex Kolomoisky/POOL)

As no fewer than 36 ministers and deputy ministers ascend the Knesset podium to “pledge allegiance to the State of Israel and its laws,” let it be clear to them all that this is not a mark of honour but rather a badge of shame.

You are standing there not because you are pledging allegiance to our beloved country, but rather because you have sworn fidelity to Benjamin Netanyahu.

If you hadn’t done so, you wouldn’t have been selected for office. Let it be clear to every one of you: the choice of ministers who will serve in Israel’s 35th government is not a reflection of the will of the people, or the result of primaries, but rather of whom Netanyahu believes will best serve his interests.

As former Likud minister Limor Livnat put it so succinctly, “the Likud party has been turned into (Bibi’s) private property”. It is his private empire and just as Louis XIV proclaimed “L état c’est moi” (“I am the state”), so Bibi has come to see our country as an embodiment of himself that primarily exists to serve him.

Shame on all those ministers who chose to collaborate and who agreed to serve in a bloated government that will expend countless millions on funding superfluous ministries that have been created for one purpose only, and that is to ensure that Bibi will remain in power and that there will be even more Knesset members who will be beholden to him for their status and livelihood.

Meanwhile, there are a million Israelis out of work, many have seen their businesses destroyed by the effects of the coronavirus and are desperately looking for ways to feed their families and pay their bills. How dare you waste the money that could have been spent on helping them? A shame on you!