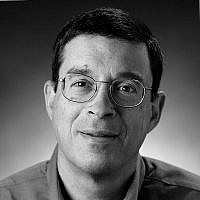 The Blogs
Mark Werner
Apply for a Blog
Advertisement
Please note that the posts on The Blogs are contributed by third parties. The opinions, facts and any media content in them are presented solely by the authors, and neither The Times of Israel nor its partners assume any responsibility for them. Please contact us in case of abuse. In case of abuse,
Report this post.

I was very disappointed to learn of State Controller Matanyahu Englman’s recent scathing report on the logistical deficiencies he found in auditing the IDF’s West Bank operations. It hearkens back to the IDF logistics scandal that enraged the Israeli population during the Second Lebanon War. And it especially saddened me because I was brought in, along with many others, to help fix that logistics nightmare back in 2008. We should learn from that “fix” that there currently is a low cost solution that may help the IDF.

In 2008, I arrived in Israel as part of a Sar-el volunteer team. Sar-el brings pro-Israel supporters from around the world to Israel to volunteer to work on IDF bases. These volunteers pay their own way to travel to Israel, live in the base barracks, eat in the base mess halls, and work side-by-side with IDF soldiers in providing logistics support. Since its inception in the early 1980s, Sar-el has brought over 160,000 volunteers to Israel to work on IDF bases.

I arrived in Israel at the very end of the Second Lebanon War. The newspapers were filled with fury over the fact that Israeli soldiers had been forced to go into battle with deficient equipment, and inadequate food and water supplies. Especially galling were the combat duffle bags (Israelis call them “kit bags”) that were supplied to the reservists as they showed up for duty. They are supposed to provide everything a soldier needs to immediately go into battle. Unfortunately, they had not been checked for years and contained broken equipment and were missing equipment.

The reservist base my team was assigned to was at the center of this 2008 logistics scandal. Accordingly, my Sar-el team was given the task of opening up all of the kitbags stored on the base and checking them. We found they were in terrible condition. For example, many were missing essentials such as canteens, helmets, and even uniforms. And the equipment they did contain was often broken and unusable.

In repacking these kitbags, we were careful to dispose of all broken and unusable equipment and to replace anything that was missing. We were proud that the kitbags we repacked were perfect, and we placed in each one a message to the soldier who would open it:

“Dear Soldier:
We hope that this kitbag we have packed for you will be of help. Watch out for yourself
and good luck.
Sar-el Volunteers”

Several years later, I happened to have a luncheon meeting in Raleigh, North Carolina with the Israeli Consul General for the Southeastern U.S. Included in her entourage was a young man named Ron, who had recently completed his IDF service and was introduced as her Director of Communications. In the course of some introductory pleasantries, I learned that Ron’s family were practically next-door neighbors with my cousins in Pardes Hana whom I visit every year. Ron asked me why I come to Israel every year and I explained that I was a Sar-el volunteer.

“Oh, I know about Sar-el,” he replied. “They are a great organization. When my combat reserve unit prepared to go into Gaza in the most recent operation there, we were supplied with kitbags. The kitbags for our entire unit were perfectly packed – – not a single item missing or broken. And inside each kitbag was a personal note wishing us good luck and indicating that it was packed by a Sar-el volunteer. Our eyes teared up to know that there were volunteers from around the world who had taken such great care to ensure we were properly equipped.”

Sar-el operates on a miniscule budget. Every year, it supplies about 4000 volunteers to the IDF to provide essential labor on IDF logistics bases. As such, Sar-el volunteers are a boon to the IDF. By providing a source of free labor to the IDF, Sar-el saves the IDF millions of shekels every year.

Recently, the IDF ‘s budget woes have caused the IDF to cut in half its funding for Sar-el. If, instead, the IDF were to fully fund Sar-el, that would provide the latter with sufficient financial resources to recruit a greater number of volunteers. If that were to happen, Sar-el would command a resource that could potentially bring up to 10,000 volunteers a year to the IDF to provide logistics support. Such a large cohort of free labor could go far in helping the IDF alleviate its logistics problems for years to come. And as an added bonus, it would provide yet another avenue for worldwide Zionists, both Jews and non-Jews, to show their support for Israel and strengthen their connection to Israel.

Mark Werner is the national president of Volunteers For Israel, the U.S. entity which partners with Sar-el to bring American volunteers to work on IDF bases. He is the author of two books about his volunteer experiences on IDF bases. His most recent book, A Passion For Israel: Adventures of a Sar-el Volunteer (Gefen, 2020), includes his experience, described above, in helping to address the logistics scandal which arose from the Second Lebanon War.

About the Author
Mark Werner is the national president of Volunteers For Israel, the US entity which partners with Sar-el to bring American volunteers to work on IDF bases. He is the author of two books about his volunteer experiences on IDF bases. His most recent book, A Passion For Israel: Adventures of a Sar-el Volunteer (Gefen, 2020), includes his experience, described above, in helping to address the logistics scandal which arose from the Second Lebanon War.
Related Topics
Related Posts