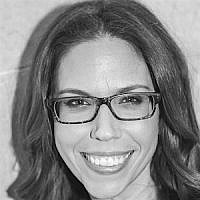 The Blogs
Andi Saitowitz
Apply for a Blog
Advertisement
Please note that the posts on The Blogs are contributed by third parties. The opinions, facts and any media content in them are presented solely by the authors, and neither The Times of Israel nor its partners assume any responsibility for them. Please contact us in case of abuse. In case of abuse,
Report this post.

After the Flood, Hashem shows Noah the ‘rainbow in the clouds’ as a sign of His covenant with mankind that He will never again bring a deluge to destroy them. “This is the sign of the covenant that I am placing between Me, you, and every living creature that is with you, for all generations: I have set My rainbow in the clouds… The rainbow will be in the clouds, and I will see it to recall the eternal covenant.” (Gen. 9:11-16)

This week, the Israeli sky has been filled with rainbows.

And I can’t help but think about the very first rainbow that greeted the universe – the very sign that symbolizes the promise that G-d will never again wipe out mankind.

The rainbow is not just a natural phenomenon caused by the refraction of light. The ‘rainbow in the clouds’ represents a paradigm shift in humanity’s spiritual development. Before the devastation from the flood, the world was an intellectually simpler place where knowing right from wrong was clearer and more rational. Rampant violence, unnecessary hatred and the lowest forms of immorality in Noah’s generation, however, demonstrated that humanity fell abysmally short of its moral and spiritual potential. After the Flood, G-d fundamentally changed the nature of ethical guidance for the human soul. The sign that He showed Noah, the ‘rainbow in the clouds,’ is a metaphor for this change. The rainbow therefore represents divine enlightenment, a refraction of G-d’s light, as it penetrates into our physical world, culminating in the first and most basic moral code: The 7 Noahide Laws. The 3rd, namely, do not murder.

And yet, here we are in the midst of yet another storm. A storm so powerful and electric we aren’t sure any more what’s a blessing of rain and what’s a curse of epic destruction. A storm where everything appears gray and right and wrong have become so distorted and obscured. The appearance of the rainbow almost reminds us of G-d’s disfavor with the world.

Are some human beings so overwhelmingly consumed by temptations, indulgences and sin? How is it that the laws which are meant to govern our lives no longer apply to so many? How is it that educating small children to hate and kill is a praised and noble value in so many societies? How is it that murdering innocent people in cold blood is even a thought that crosses someone’s mind, let alone a filthy despicable act of the lowest forms of cruelty and immorality? How is it acceptable to preach death? How is it that be-headings are actually occurring in 2014, let alone widely accessible on YouTube channels and all over the news? How is it that people are using knives, axes and saws to execute others? How is it even fathomable to call on the inhalation of an entire nation, again and again?

In my shelter, I fear the world is at an all-time low with an intensity of hatred, mixed with ignorance and power in very dangerous places. Mankind is creating its own thundershowers and floods of terror. Groups around the world have their own nuclear storms brewing with weapons of mass destruction and calling on others to support their incitement and cause. And opening a flimsy umbrella isn’t a lasting answer to peace and calm.

How many more rainbows do we need? 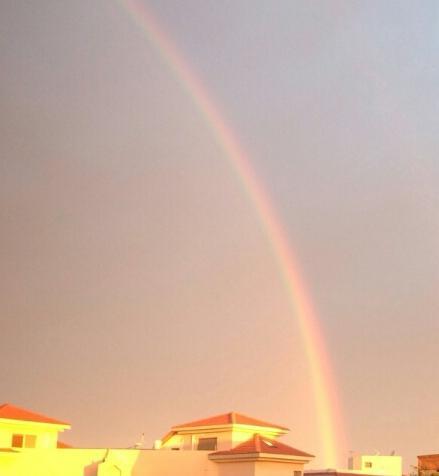 I look up at the sky and the most magnificent rainbow gently pushes its way through the clouds. And I’m reminded that every cloud has its silver-lining and despite the heavy dark thickness looming overhead, there is something so refreshing and cleansing that only a rain can bring. And I am reminded of all the little miracles that happen daily. And I’m reminded of all the blessings and helpers that turn nightmares into fantasies. And I am reminded of all the people who learn to dance in the rain and not just get wet. And I think of the unique rain-smell and the soft sounds of raindrops that fall like little acts of kindness from above. And I think of the colors of the rainbow and how differences, diversity and variety make life so beautiful and so meaningful and so interesting and so intriguing. And I comfort myself knowing that Hashem made all colors and there is always hope.

And I think of my past growing up in a rainbow nation and how it is possible to dream and overcome seemingly insurmountable challenges. And I look around my home, Israel, and I see the multitude of race, religion and color in everything. And I see the innovation and advancements and brilliance of a young homeland filled with hues and shades from all walks of life and years of painted history. And I am so proud of this prism and everything it represents. And I hope this band of color envelops the world with optimism, promise and hopefulness. And I think to myself, the rainbow has become in Jewish thought the symbol of both G-d’s glory as manifest in the universe and G-d’s faithfulness to His covenant to mankind and to the people of Israel.

And yet each time I am awakened by the sharp flash of a lightning bolt of terror, another anti-Semitic exploit, another vicious undertaking, a surge of pain like the deepest cry of thunder, I look up the rainbow with humility and faith and softly say: ‘Blessed art Thou, O Lord our God, King of the universe, Who remembers the covenant, is faithful to His Covenant, and keeps His word.’

About the Author
Andi Saitowitz was born in South Africa and fulfilled her Zionist dream of living in Israel since 1999 following a Bnei Akiva year's leadership program in Israel after matriculation. Described by her clients, associates, friends & family as a Transformational Leader, Inspiration Queen and Lover-of-Life, Andi Saitowitz is a certified Personal Development Life Coach & Motivational Speaker graduating from the esteemed Adler Institute, a member of the International Coaching Federation and a Global Lumina Practitioner. With a professional background in Psychology, Organizational Communication, Research and Practice and years experience in Non-Profit Donor Relations and International Fundraising Campaigns, Andi is passionate about and committed to helping people bring out their absolute best. She firmly believes that when we discover and offer our gifts to the world, we become far more aware and appreciative of the amazing opportunities around us, and conscious of our power, our choices and life experiences. Andi is married to her best friend, and is a blessed mom of 3 awesome children. In her spare time she loves playing sports, reading, volunteering and is co-founder of the latest meaningful gifts online charity portal www.mgifts.org. Andi runs a private coaching practice and offers comprehensive professional coaching services to individuals, couples, teams and organizations, bringing a magnificent mix of Positive and Adlerian Psychology, NLP, Mindfulness and High Performance Training to everyone she coaches, mentors and inspires.
Related Topics
Related Posts
Comments