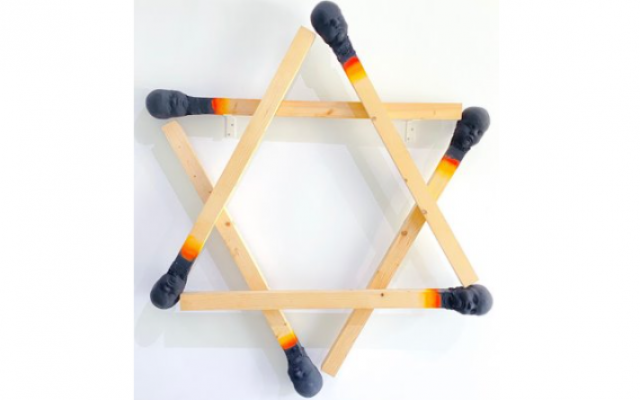 I saw this very moving Star of David (“Magen David”) memorializing the Holocaust in a gallery called Chic Evolution in Art in Fort Lauderdale, Florida.

Here is the artist, Wolfgang Stiller’s statement about his work (as provided to me by the galleries’ General Manager, Bruno Lima):

This work belongs to a group called memorials. Mostly memorials are very distant and too abstract to evoke real feelings for the purpose they represent. So I try to create some memorials which are meaningful and overcome this distance and make the audience think about the reason they stand for.

This thoughtful memorial work did evoke a lot of meaning for me as my family was greatly impacted by the Holocaust, and my interpretation and sentiments follow:

The six sides of the Star of David correspond to the six million holy Jewish martyrs, cold-bloodily murdered by Hitler (may his name be obliterated) and his evil Nazi henchmen. Moreover, from the ashes of the Holocaust came the redemption of the Jewish people after 2,000 of persecution, exile, and suffering followed by their return to the Promised Land of Israel, of which the center of the flag of the State of Israel is the Magen David!

As you’ll see, the six sides that make up the Magen David look like matchsticks, which is very apropos given that many of the Jews that were exterminated in the “Final Solution” were first gassed to death (in a pretense of a shower upon arriving at the death camps) and then then their bodies were burned in the crematoria (in an effort to try and hide the crimes of the Nazi perpetrators from the world).

The horrific genocide of the Jewish people is emphasized in the blackened, burnt tips of each of the matchsticks which is in the shape of babies’ heads. To me this symbolizes the vileness of the Nazis in indiscriminately executing, just for their faith, countless Jewish men, women and children! Further, they were all innocent victims (of depraved, institutionalized genocide), which the purity of the babies on the matches powerfully represent.

I believe this Star of David of remembrance is a potent and direct expression of the guilt of the Nazis and the vile, shameless Holocaust they persecuted against us! And while no artwork can fully convey the horrors of what happened and the evil perpetrated just last century to us, I am moved by this work and whatever even minimum accountability that it conveys. In a sense, I was gladdened to hear that the artist, Wolfgang Stiller, is from Germany, and it gives me some hope that the German people (or at least some of them) recognize what they did to the Jews, and perhaps even feel regret.

As we recently completed the Jewish high holidays between Rosh Hashanah and Yom Kippur, a time of Judgment, and we ask G-d to forgive us, so we are told that we are asked to forgive others. However, can we ever really forgive the magnitude and cruelty of this genocidal crime to the Jewish people? I don’t think that is really humanly possible to forgive the premeditated and scientifically executed, brutal murder of a third of all Jews in the entire world. However, I do thank the artist, Wolfgang Stiller for his sentiments with the Magen David to remember and never forget the Holocaust, and most importantly, to never let it happen again! Finally, my hope is that this artwork memorializing the Holocaust finds a suitable home in perhaps Yad Vashem or other major Holocaust museum or exhibition where people can broadly experience and benefit from the important sentiments conveyed.