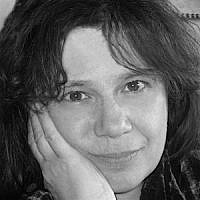 The Blogs
Diane Joy Schmidt
Apply for a Blog
Advertisement
Please note that the posts on The Blogs are contributed by third parties. The opinions, facts and any media content in them are presented solely by the authors, and neither The Times of Israel nor its partners assume any responsibility for them. Please contact us in case of abuse. In case of abuse,
Report this post.

Once upon a time there was a rock squirrel named Jacqueline that lived in the desert and was very happy. Jacqueline collected seeds and mesquite beans and cactus fruit and before the winter came she stored Pinon nuts. She was always busy foraging and on the lookout for food. Her senses were sharp, and she jumped and skittered over the rocks all day. Still, there were times when she would go without eating for a day or two. Then, when she came upon a late blooming cactus, she would gorge on the fruit. She drank from the clear stream in the mornings. The regularity of the seasons provided for all her needs.

Then one morning she saw something glinting on the trail ahead of her. It was a collection of unusually tasty seeds inside a strange-looking contraption. She tiptoed very quietly inside to taste the seeds when suddenly the trap door shut. She had been captured by Nora, a young research scientist on her first field assignment. Nora brought her back to the trailer where her lab was set up.  Nora was very gentle with Jacqueline and did her best to make her feel comfortable. She taught her to go through a maze to find her kibble and treats, and carefully fed her with great regularity twice a day on what she thought was a balanced diet. Nora gave her lots of computer games to play to keep her mind active, and she had a wheel for exercise.

Jacqueline’s rough fur became glossy and she filled out. But then Jacqueline kept filling out, and getting bigger and bigger.  She was not used to eating regularly and staying inside in a box. Also, the food was too salty and very low protein. She grew and grew until she couldn’t fit on her wheel anymore and then she didn’t exercise. She just sat in her corner playing the computer games. Nora thought Jacqueline was one really smart squirrel.

But then one day Nora checked on her and was surprised to find that Jacqueline, the sturdy little rock squirrel, now had really high blood pressure. She also was exhibiting symptoms of diabetes, including fatigue, constant urination, and constant hunger. Then came a day when she noticed that Jacqueline had stopped even playing her computer games and was just watching soap operas. Soon she was having a hard time even following the maze to her kibble and was crying and angry about it because she was so hungry, and even bit Nora.

Nora realized that Jacqueline’s high blood pressure was causing inflammation in her brain, that she was developing vascular dementia.

Nora felt very bad. She said, “If I had known better, I would never have allowed this to happen to her.”

Nora learned there was a neurologist in Albuquerque who for many years has been studying hypertensive rats and has found a drug that stops the inflammation. She was very glad that he has developed a drug to stop the progression of dementia in hypertensive rats and would be able to help her squirrel. And, Nora was very relieved to learn that this was not just a fairy tale, and that in time, there might also be drugs that could help people too.

Gary Rosenberg, MD, is one of the leading researchers in vascular dementia. With his primary research focused on hypertension as a cause of dementia, Dr. Rosenberg says that treating hypertension early on is very important. His research has also focused on early identification of different types of dementia.

Rosenberg, former chair of the neurology department at the University of New Mexico Health Sciences Center in Albuquerque, at the request of UNM Chancellor for Health Sciences Paul Roth, MD, is now heading up the new UNM Memory and Aging Center. The center will work to serve the growing population, currently estimated to be 43,000, of people in New Mexico who have some form of dementia. The center has Dr. Rosenberg, Dr. Janice Knoepfel, who is an expert on Alzheimer’s disease, and Dr. John Adair, trained in behavioral neurology, to see patients.

Rosenberg is also looking in New Mexico for those people—referred by their doctors—who might be good candidates for his continuing research, funded by the National Institutes of Health (NIH), where they will receive free MRIs and other tests and possibly be enrolled future drug trials.

And that is good news for Jacqueline the squirrel – and for people too.

The natural foods that we gather on Sukkot may serve to remind us that our diets have changed radically in a very short time over the last century and that we are wise to be eating more unprocessed foods.

A special nod also to ethnobotanist Gary Paul Nabhan, author of “The Desert Smells Like Rain,” and to historian and Franciscan friar Kiernan F. McCarthy, for their dedicated work with the Tohono O’odham, Native Americans who reside in the Sonoran Desert near Tucson, Arizona and who suffer some of the highest rates of diabetes in the world since adopting Western foods and discontinuing their practices of food gathering.

“A story for a happier ending,” first published in the Gallup Independent Oct. 15, 2016, is based on an article Diane Joy Schmidt wrote for the Fall 2016 New Mexico Jewish Link,  “Studies in Dementia Q&A with Dr. Gary Rosenberg,” with support from the Journalists in Aging Fellowships, a program of New America Media and the Gerontological Society of America, sponsored by the Retirement Research Foundation.

About the Author
Diane Joy Schmidt has been a regular correspondent and columnist since 2008 for the New Mexico Jewish Link, the Gallup Independent, and a recent contributor to Lilith, Hadassah Magazine, and the Intermountain Jewish News. Her columns and articles have received awards from the Society of Professional Journalists, the American Jewish Press Association's Rockower Awards, the Arizona Press Association, the Native American Journalists Association, and New Mexico Press Women. She grew up on Chicago's North Shore in the traditions of Reform Judaism, is anchored by her memories of the fireflies at Union Institute camp and the Big Dipper over Lake Michigan, and is an admirer of all things spiritually resonant.
Related Topics
Related Posts
Comments