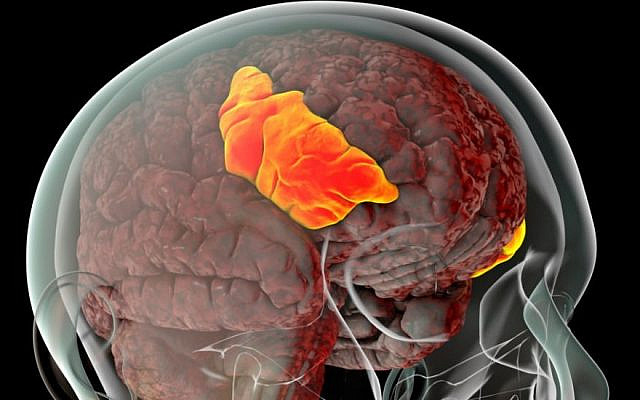 Human brain with highlighted inferior frontal gyrus, computer illustration. It is a part of the prefrontal cortex and the location of Broca's area, which is involved in language processing and speech production.

Yes, I’m the stroke doctor who had a mini-stroke in front of his ex-patient. As I’m carried out to the ambulance, I hear him saying through his residual speech deficit, “He’s too young! Should be me!”

I’d arrived at friends, erev eighth day Pesach, feeling great, after shul and a brisk two-mile walk. I was delighted to see our hostess’ parents there. I’d treated her father for his cerebral bleed five years previously. He’d lost his speech then. A tragedy, as he’d been the life and soul of any party, a born raconteur and comedian, his speeches a highlight of family smachot. From being an East End barrow-boy selling ladies’ underwear, leaving school with no exams, he went to night classes, then University, and got a PhD, working in the team that discovered messenger RNA. Still sold ladies underwear with his wife at weekends! Slowly he’d labored to get much of his speech back and then suddenly, it was his doctor who found speaking difficult.

Her name flashed into my mind, then disappeared. I couldn’t say it!

I put my knife and fork down. Gestured my wife into the next room, and indicated I was having another mini stroke. More severe this time. “Expressive dysphasia” — inability to find my words. I could understand everything, write, read but not speak. I saw in my mind’s eye which blood vessel in my brain was blocked.

She took over. Our grown-up children ran off to beg aspirin from neighbors. The ambulance service whisked me away to the stroke centre where I used to work.

Since retirement I blog, tweet, write, persuade, give speeches, campaign. I talk a lot to our children. Losing speech, I feared my useful life was over. Speech is so central to our humanity that the Onkelos (10 translated “man became a living soul” in the Creation story (2) as “man became a speaking soul.”

At the hospital, some of my favorite staff were on. The new young consultant was good. The mini stroke gradually cleared.  My tests were all fine, but the worrying thing was this had occurred on full preventative treatment. Even though preventative treatment is highly effective, mini-strokes still warn of major even, G-d forbid, fatal strokes to come.

I reacted in two ways, as a doctor and as a patient. As a doctor, this was simple. I could optimize my treatment and identify risk factors to be minimized.

As a patient, this was hard. I was in shock. My confidence was knocked. In myself and in the Future. Fourteen weeks later, I still feel vulnerable, and nothing in my medical experience, had really prepared me for this.

Confronted by my own mortality, the daily “Modeh Ani” and “Elokai Neshama” prayers of thanks on waking now have double resonance, not only because I  was now well, but because strokes can also occur during sleep. As the sages say, “Sleep is 1/60th of death.”(3)

So, when a month later we were in Israel, I did what I rarely do: write a long note to put in the Kotel (Western Wall). I’m not so sure this works, as it’s up to us, not G-d, to solve our problems, but as a fan of Paschal’s wager, why not back the horse both ways?

Do I want to continue living my life as it is? All this worthy Uyghur activism and so on? Should I do more of my family bucket list, while I have time? Should I give each of our children the advice I want to now, instead of waiting until the “time is right”?  Is this what the Psalmist (4) meant by, “Teach us to count our days.’

I resolve, at least, to leave no stone unturned, in the battle to avoid a major stroke, however marginal the gain. I set my phone alarm to ensure I take my pills on time, despite the unlikelihood that occasional missed doses resulted in my mini stroke. My specialists agree to a slightly more effective anti-coagulant, despite its side effects, as I prefer to risk these rather than a stroke.

I’d been exercising less since my second COVID bout, which had caused a modest weight gain. I was getting to bed late, so sleeping less, a product of the incessant excitement, social media load and internet surfacing that comes with campaigning for the Uyghurs. I was missing out on my nightly kodesh (Torah study), which always grounds me. And to add to the stress of campaigning I follow the fluctuating vicissitudes and fortunes of Tottenham Hotspur FC, which is like being chained to a lunatic! Did Xi JinPing cause my stroke or was it the Spurs?

The big thing was that I was drinking way too much, especially since induction into the shul kiddush club! ANY Alcohol, evidence shows, can trigger my main risk factor for stroke, a rapid irregularly irregular heartbeat, causing blood clots to form and float up to block a blood vessel in the brain.

I was going to have to change.

If I succumbed to a stroke,

without having done everything to avoid one,

the family would kill me!

Not only did I have to go back on what my wife calls my “body maintenance regime” (core exercises, brisk walks), resume calorie counting, but I had to get more sleep, cut back on social media and internet surfing, meditate to reduce my level of overstimulation and excitement, and stop alcohol completely.

The latter is hard, for I love really good whisky and wine. I often argue whisky is a proof of G-d’s existence. Only a divine being could create another with the intellect to put barley and water together to play such a symphony of taste on the tongue.

Then there’s the camaraderie, the shared experience with other people, or the uxorious romance of a quiet glass of wine with the wife, watching Wimbledon highlights. It’s a part of each sporting event be it in anticipation, celebration, or misery. And alcohol is everywhere you look. Our Sunday magazine headline was “20 great wines for under £10!” At that price, they can’t be kosher!

I became quite withdrawn, says the wife, as I thought everything through. I wrote an action plan in my phone. Sometimes I read it as an alternative to full Tachanun (5)! So, like athletes do, I concocted motivational statements.

Uvacharta ba-chayim! (‘See I have set before you life and death; choose Life!’)(6)

As our son said,

“Why choose to drink,

When you could live forever?”

So how am I doing? Well, I am off the juice, helped by the fact that my new drug does not go well with alcohol. As so many before me, I find talking about my health problem with family, friends, anyone, is helpful. I have lost 12 pounds. I sleep an hour longer.

The Kiddush club reports to the wife that I’m still the life and soul of the party. On Kedem grape juice! But then, I’ve never needed alcohol to enjoy myself or relax. My sister asked, “How do you feel?” “Well, life’s less fun and more boring!”

I’m irritated by all this stuff I have to do, like exercise and sleep. It gives me three less hours a day (more when our cleaner is away!) to do things I like, like my blogs, where I make sense of my life.

So, I tell her, “I’ll live longer but more miserably.” But not as miserably as I would with a stroke and losing my speech.  So, let’s be positive! I now CELEBRATE inside, as if I have scored a goal, each time I avoid alcohol!

I’ve started an “Alcohol Omer,” saying the “Yatzar et ha Adam b’Chochmah” (7) blessing, after sunset, then counting the days and weeks “LeLo (without) Alcohol” I celebrate inside when I’ve exercised, not overeaten, or meditated! I celebrate when I turn my phone off at 10 p.m. to stop surfing the net! I celebrate getting my nightly kodesh fix and enough sleep!

And as usual, whatever is going on in one’s life, the weekly Pirkei Avot (8) produces something relevant. “Ben Zoma said ‘Who is Mighty? He who subdues his impulses!’” (9) Perhaps he had the same attachment to alcohol? He also said, “Who is rich? He who is satisfied with his portion.” I guess that will have to do!

And from Chanina ben Chachinai, “He who stays awake at night…forfeits his life.” (10) Unlike other sages, he understands that sleep is a nightly MOT, increasing longevity, recharging and repairing mind and body.

So now, I’m the stroke doctor who follows the advice he once gave stroke patients on food, exercise, sleep and alcohol! “Ein Bereirah!” — there’s no choice!

If only because, should I have a major stroke, I don’t want the wife and family saying, “If only he’d….”

FOOTNOTES for those, especially non-Jewish readers, either not speaking Hebrew or unfamiliar with our traditional sources

1) Aramaic translation of the Torah, read in public in parallel with the Hebrew original, for the  people, composed around 100-200 CE, revised final version 400-500 CE

5) Interminably long penitential prayers read in full on Mondays and Thursdays, and in condensed version, mercifully, the other days of the week (and not at all on Shabbat)

7) I say a shortened version of this early morning blessing praising the way the body is constructed and mentioning that if its ‘hollows (vessels) become blocked’ it is impossible to exist, which is particularly apt bit for stroke.

8) Section of the Mishna, also called Ethics of the Fathers, of sayings from 200 BCE to 200 CE, comprising 6 chapters, one of which is read each Shabbat afternoon, in a repetitive 6-week cycle between Pesach and Rosh Hashanah.

10) Avot 3 verse 5. Translations vary. This is the Rev S Singers’ (1962). Jastrow (1903) translates this in two ways, ‘is responsible for his life’ or ‘would have himself to blame for his life (if any accident should befall him)’ which although probably more accurate is not as pithy. Both suit my purpose.