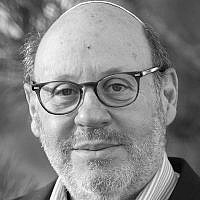 The Blogs
Morris Allen
Apply for a Blog
Advertisement
Please note that the posts on The Blogs are contributed by third parties. The opinions, facts and any media content in them are presented solely by the authors, and neither The Times of Israel nor its partners assume any responsibility for them. Please contact us in case of abuse. In case of abuse,
Report this post.

Homesh and Al Walaja are  two villages separated by religion and thirty-two kilometers. Both are currently declared “illegal” by the Israeli government. Homesh was initially evacuated in 2005 as part of the disengagement from Gaza. That disengagement included four West Bank settlements that had been built illegally—taking Palestinian lands. In recent years, there have been attempts to re-establish this settlement.

Tragically, last week, an Israeli was gunned down by a passing Palestinian car as he exited from the Yeshiva bus. His memory should only be for a blessing. However, his presence at a site that the Israeli government had destroyed sixteen years ago led to his violent and unfortunate death. No one should be killed for learning Torah in this day and age. And there are nearly unlimited places inside the state of Israel and in legally defined places in Judea and Samaria where Jews can learn Torah and live a life they see fit.

I mourn Yehuda Dinentman’s (zl) needless death, because it came about as a result of hubris and a lack of understanding of the first ethical thrust of the Jewish people—the dignity of each and every  human being. This was land that the Israeli government said belonged to Palestinians and it was that fact that led to the Israeli government in 2005 forcing evacuation from this settlement. Yehuda Dimentman’s memory should be for blessing—and we should never condone the death of anyone by violence.

Al-Walajah is another “illegal” neighborhood. It is a neighborhood on the edge of Jerusalem and was incorporated into the Jerusalem municipality following the Six Day War. For the last 54-plus years, the residents of Al-Walsh’s have not been able to secure “legal” status for their homes—and are thus living there, as a result, illegally.
In the coming weeks there will be a hearing to determine whether  an additional 38 homes will be destroyed. Alternatively, the residents seek to establish a zoning plan that will enable this neighborhood to finally become part of the “official” landscape of the Jerusalem municipality. Recently I signed a letter to Secretary of State Anthony Blinken which read in part “As American rabbis and Jewish community leaders who hope for security, peace and justice in the state of Israel, we are writing to express our deep concern and distress over the ongoing home demolitions in the Palestinian village of al-Walajah in East Jerusalem and the lack of intervention thus far from the Israeli government to stop them. Time is running out: soon the Supreme Court may allow the demolition of thirty-eight homes, and set a precedent for the potential mass dispossession of the entire section of Al-Walaja that Israel annexed in 1967. We call on you to intervene and prevent this humanitarian disaster… To date, the approximately 1,000 people residing in the annexed part of the village live under constant threat of demolition at the hands of the Israeli authorities. Meanwhile, the Israeli neighborhoods and settlements right next to Al-Walaja– a number of which are built on Al-Walaja’s lands– continue expanding…We believe that home demolitions do not reflect the values on which the state of Israel was founded, and certainly not those to which it must aspire.”

I am a strong believer in the vision of the Zionist dream. I am also a firm believer that “two-states for two people” remains possible. I believe that minority residents living in the Jerusalem municipality deserve an opportunity to live without fear and with the hope that their identity will not be used to compromise their inheritance. These two villages represent two very different realities impacting the State of Israel. In the case of Homesh, it impacts the possibility of ensuring a resolution for the Palestinian people and their desired state. For the villagers in Al-Walaja, it is their established connection to this neighborhood—but for which they cannot gain  legal recognition. As Jews, we are called upon to resolve both cases with an eye towards equal justice. Both of these cases are calling out for resolution. Ensuring that Homesh remains “illegal” enables the possibility of one day seeing peace between Israel and the Palestinians emerge. As it relates to Al-Walaja, it is to demonstrate that we are finally able to implement a  Biblical ideal that is repeated thirty-six times in Torah. That ideal and ethical norm is to treat the minority person in your midst as one of your kinsfolk themselves. We remember the slavery in Egypt where such was not the case. It should be the case in the modern state of Israel for generations to come even as we continue to fulfill our inalienable right to return to Zion.

About the Author
Morris Allen is a retired congregational Rabbi, served as Sr. Community Liaison for Rep. Angie Craig(MN02) and is a constant thinker about Judaism and the responsibility that comes with it.
Related Topics
Related Posts
Comments