What’s in common to these adventurous Hollywood motion pictures – Indiana Jones and the Last Crusade, Aladdin, Mortal Kombat: Annihilation, Dune, Star Wars: The Rise Of Skywalker, The Martian and Lawrence of Arabia?

Apparently they were all filmed in southern Jordan. Allegedly, people love movies or series and they are willing to travel to destinations, focused on finding the various filming locations. Jordan is indeed a popular haven for these desires.

Indiana Jones and the Last Crusade contains scenes filmed at one of the seven Wonders of the World – Petra. The Nabataeans – once ancient Arab people who inhabited northern Arabia and the southern Levant –  were famous with their capital Raqmu – known in present-day as Jordan’s Petra. The entrance to the city starts at the narrow breathtaking Bab es-Sik canyon all the way into the famous rose-red city, 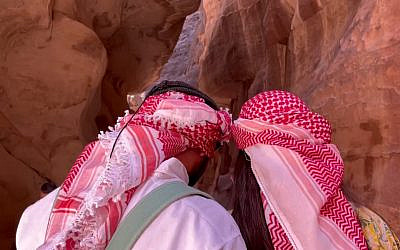 a name it gets from the wonderful color of the rock from which many of the city’s structures were carved. Petra is indeed magnificent. It was designated a World Heritage Site and is listed as a must visit for every traveler. The attractions are endless, from an underground ancient rock carving, royal tombs and the 2000 years old theatre. The venue was chiseled out of rock, slicing through many caves and tombs in the process. Also at Petra, the skill and speed of the sand bottle artists is amazing to see. Done in sand in its original colors, they write a sentence or depict a caravan of camels. This might be the ultimate souvenir for any traveler. 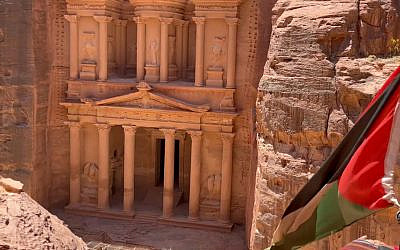 A few tips for the visitors –

– The walk via the canyon is relatively easy all the way down to the site. The way back might be difficult for the elderly and those having walking issues. Horses, carriages and even golf carts are available.

– Do not miss climbing to one of the higher spots. It might be a challenge but it’s surely rewarding.

– Take your time. It’s impossible to see Petra in 3 days, and as most people come for 3-4 hours be aware that seeing everything is impossible.

An hour away is Wadi Rum, with its distinctive red sands and magnificent sandstone mountains. This desert land resemblance to the surface on Mars, turned it into a popular location for shooting space motion pictures. 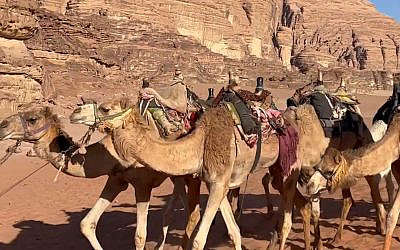 Our guide Hisham, a Bedouin, born and raised in this desert, insisted – as the first step – on taking us to his favorite location. “This is where Matt Damon walked in the ”The Martian” space movie from 2019”, he smiles, points to a cliff  and insists on taking our picture there. Indeed it makes the right impression and it looks like the wadi Bedouins are extremely proud of their Mars view desert home. 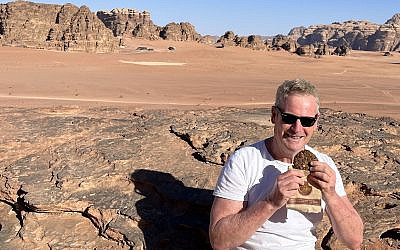 Wadi Rum Mars look, with the chocolate chip cookie, the first food to ever be baked in space (photo by Motti Verses)

Wadi Rum leaves me breathless. Surely it is one of the most spectacular desert scenery to be found with its desolate valleys and white sand dunes. They stretch all the way to the horizon, bounded by towering peaks sculpted into striking sandstone domes. The movies industry is so important to the locals. We ride in the dusty sands, enjoying the peaks and red mountains, until we stop in a shaded canyon. Surrounded by dozens of similar pick-up trucks, we walk with travelers like us to see a sculpted image of Peter O’Toole in “Lawrence of Arabia” – the British historical film, released in 1962, that became one of the most celebrated epics in the history of cinema. Next to this sandy piece of art, a similar face of King Abdullah the first, the Founder and Monarch of Jordan is to be found. Extraordinary. 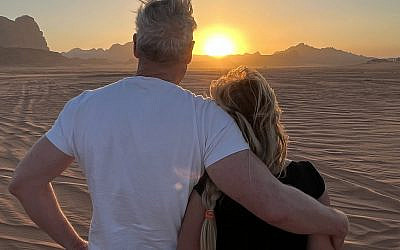 Similar to Petra, it is impossible to enjoy all the treasures of the Wadi. It is so gigantic. Days are needed to cover its jewels. However there is always a daily sunset. This is a must and no one will prevent you from enjoying it. Except , maybe bad weather conditions. We were lucky.

We made Aqaba city on the red sea shore our base, due to its proximity to the Israeli-Jordan border. The city’s strategic location at the northeastern tip of the Red Sea between the continents of Asia and Africa, has made its port important over the course of thousands of years. 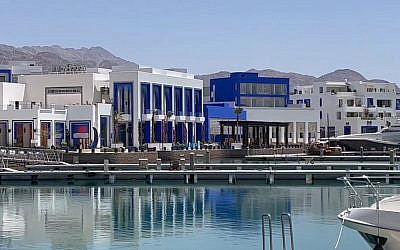 Aqaba is currently proud of its latest project – Ayla Oasis, a redevelopment project that consists of artificial lakes, a marina, residential units, hotels and restaurants. Its architecture and design are modern, impressive and eco-friendly.

The DoubleTree by Hilton was our home in the city. The warm chocolate chip cookie welcome is synonymous with DoubleTree hotels worldwide, and was waiting for us upon arrival. As 2 years ago, astronauts on the International Space Station (ISS) baked chocolate-chip cookies – becoming the first food to ever be baked in space, I took one with me to Wadi Rum. With the backdrop of the famous space movies, I ate one to show my respect. 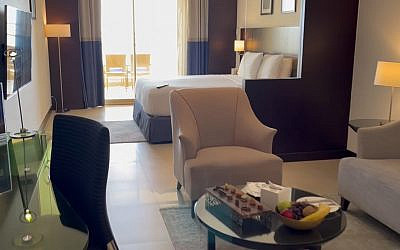 A pampering accomodation in a homey hotel (photo by Motti Verses)

The hotel is centrally located with courteous and attending staff. Our room was spacious with a magnificent view of the red sea and mountains around. We loved the Diwan rooftop restaurant and bar with live entertainment, majestic vistas and pampering gastronomy. The sports bar is bustling and the spa with the infinity pool are gratifying. 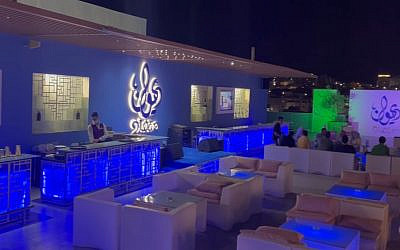 As Aqaba is lacking touristic beaches, a shuttle is available to transfer hotel guests to the outstanding Berenice beach club, 12 kilometers south. From relaxing seaside facilities to a glass boat ride with unbeaten Red Sea snorkeling, this is heaven on earth. 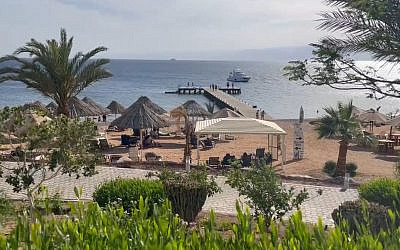 Comparing the generous hotel rates to Eilat, just 2 kilometers away, Jordan offers to travelers an affordable short break. Surrounded by flocks of Israelis in Petra, Wadi Rum and on the beach, a vacation in south Jordan is surely becoming trendy.