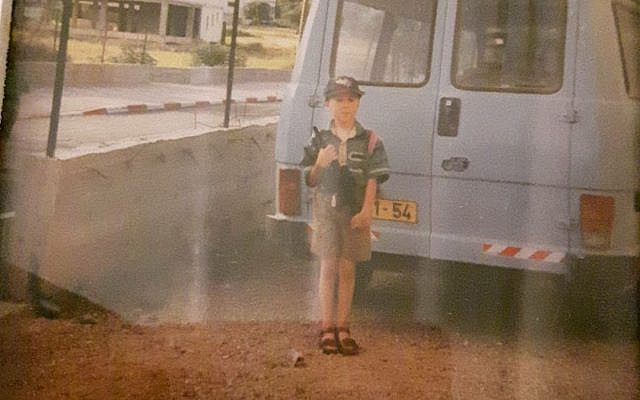 Back in the 90’s, I was just a regular kid attending a regular school and living a secular life in northern Israel.

But some memories never fade. Happiness, trauma, HaHadashot, endless weddings, terror, school field trips and the smell of the countryside – cows, all kinds of crops, the tomato harvest.

Sometimes a picture says it all. That blurry picture taken with a lousy camera and then getting the film printed at an even lousier photo shop somewhere in Nazeret-Illit. The boy in the picture is me. I was so proud, standing in the courtyard of a relative and holding a weapon which a visiting soldier happily displayed for me. I felt special. I remember the crappy sandals I was wearing to this day.

But this is not about it, but rather about happiness and trauma mainly. And fear. And being sort of a farmer-boy who thought Haifa was like the center of the world. Tel Aviv was too distant to even imagine for me.

My happiness consisted of getting a shekel or two for buying blue Kent-cigarettes for my grandpa. Back in the days 1 shekel got you an ice-cream or two small chocolate bars. With 5 shekels I could buy a naknik-sandwich, candy and soda at school. With 10 shekels I was on top of the world, I felt invincible.

My first touch with reality sort of came to place when we went on a school-trip and camped out in the forest. The day after we were at this swimming pool and waterslide attraction place, I had my 10 shekels in my hand and confidently walked up to the fast food counter, I had never actually tried any fastfood before. I didn’t know what McDonalds was. I knew Shawarma, Falafel and Hummus. That’s about it. I saw the pictures of freedom fries, hamburgers and chicken nuggets. There was even cheeseburgers. I told the tired fast-food guy “shtaim cheeseburgerim bevakasha?” and handed over my 10 shekel coin. The guy looked at me, looked at the menu and replied “Hey they are 24 shekels each!”. I just stood there in silence. I really wanted to try a cheeseburger for the first time in my life. “But, but… can I get one then?”. The guy looked at me and said “if you don’t have money, you cant have it. You need to pay for it…”. At that point, the then secret love of my life from class turned up. She was rich, beautiful and mezmerizing.

She gave me a 50-shekel bill and said “my dad gave me four of those, take one but don’t tell anyone I gave you because we can’t be a couple!!”. I went for two cheeseburgers and had a real Coca Cola. And I entered heaven. Never ever before had I eaten something that tasted so good as two sloppy cheeseburgers from a run-down water splash park.

I experienced a lot of trauma growing up in Israel. This was the time when there was no A/C on the buses, the driver drove like a F1-driver with all doors open and old men sat in front smoking and arguing politics with the bus-driver. I remember when a suicide-bomber was evaded and manhandled in the last second. If not I wouldn’t be alive today. He wasn’t killed. I remember his face while laying on the ground outside the bus. He was smirking. An old arab man in traditional clothing made his way through the commotion and spat at him and screamed “ya kalb, akhu sharmuta!” – you dog, son of a whore!

Another event I’ll never forget was during 1997 and 1998 when Saddam Insane threatened to fire SCUD-missiles with sarine gas at us. Everyone received gas masks, but for some reason my parents never collected them. I don’t know why – they just told me not to worry. But I worried, everyone was bracing for the worst and my parents did zilch. I’ll never come to terms with that.

But as a farmer boy this was all still distant to me. I was happy driving a tractor or herding sheeps, goats and cows. I was happy when I wasn’t bullied in school. I was happy when we built our own house and I got to ride along with the cement truck driver – I felt so cool controlling the buttons and joystick adminestering the concrete or sand mixtures needed.

I remember when two of my uncles got married at the same time. Two weddings at once. That was intense even for a boy like me. I remember the catering people running around like crazy and I remember when they realized they had screwed up the desserts and the cursing between them. I don’t know why I witnessed this, but I felt uncomfortable doing wedding dances so I snuck back behind the kakalorum and that’s just why.

And I remember when Yitzhak Rabin was murdered. We all mourned.

I can only imagine how far Israel has come since then, but growing up back in the days there was not a walk in the park. Still I would do it all over again.

Peace to all of you.