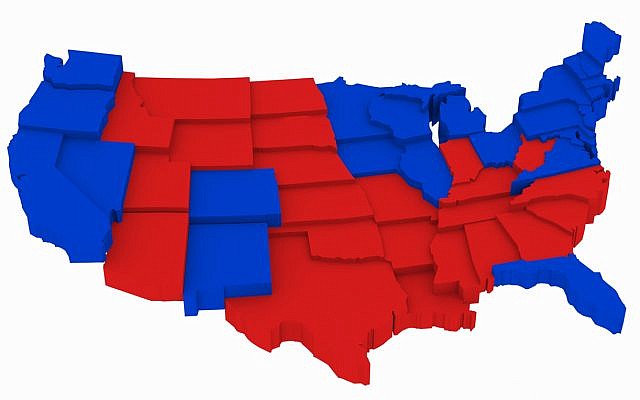 Illustrative: Red and blue states, US presidential elections 2012. (via iStock)

The war between liberals and conservatives in the United States is getting worse by the day. The current situation is unsustainable. To bring hope to the region we need a diplomatic horizon. It is time for a two-state solution.

“We’ve been laying the groundwork for a two-state solution for the Americans for some time now,” said a spokesman for the Israeli Foreign Ministry. “Both liberals and conservatives are in a zero-sum battle for control of the whole land. But we see a win-win situation within reach: two states for two principles; that’s our vision. Our own interminable experience with two-state solutions uniquely situates us to offer expertise to our American partners. Some folks in the States aren’t thrilled with the idea of us meddling in their affairs, but, we believe that with true friends sometimes you have to speak tough-love. But working with our partners in the US we’ve also found a lot of support for partitioning the land (#piecenow; #wetwo).” One resident of Oklahoma who would only identify himself as a follower of Rush Limbaugh said, “Damn right I support two states. The day we get rid of those liberals, we’ll wake up to a new Midwest.”

“Don’t get me wrong,” said another red state proponent of the plan. “We love vacationing in California, and they make great wine up there. But dividing the land is the only way to preserve the conservative identity of our future state.”

“I love it. Finally all of our aspirations will be fulfilled,” exclaimed a woman from New York. “Hillary on a 10-dollar bill!”

The spokesman for the foreign ministry related to the sensitive issue of borders. “The borders of the two-states have been pretty clear for a long time now. You’ve got large concentrations of liberals along the coasts. And then between Pennsylvania and Idaho, it’s just completely red. We want to minimize the conflict between the two sides. Safe passage between the coasts will be guaranteed. We want to see two states, living in peace, sandwiched between each other. But in any final agreement, it’s clear: Chicago will have to go.”

Meanwhile a non-governmental agency, Israelis for Piece Now, has sprung into action to advocate support for the two-state solution in the US. “Our work is focusing on the American youth,” said a spokesman. “From 50 years of intramural soccer matches between Israeli and Palestinian youth sponsored by pro-peace NGOs here, we achieved one thing: a lot of mischievously kicked shins. We learned that you can’t just bring people together when they don’t want to be. We want to change the dynamic. We want to defuse the negativity. So we’re setting up separate camps for liberal kids and for conservative kids. Our message to them is stop spending so much energy hating one another. We want them to imagine life where they never have to see each other. And so we run programs to channel their energy into positive directions; to imagine life where they never have to suffer each other, and instead can focus on the type of society they want to create for themselves.”

“In our conservative camp, the kids start the day by kneeling in prayer, followed by paintball. And then we challenge them with activities to envision the society they want to create. We asked them what symbols of American culture they would want to claim as theirs. “‘One nation under God’ — that’s gonna be us, for sure,” said one girl. “And here in my hand I have their position paper for a just society, Tycoon Olam.”

“Then, over at liberal camp, the kids start the day kneeling in anthem, followed by karaoke and paper mache (paintball was deemed too violent). Color war there was amazing. One team adopted as its slogan “Plight makes right!” while the other marched to the banner, “To the victim go the spoils!”

“But in both camps, we had to find an anthem that all could cheer, and from a source that all could hallow — Dr. Seuss: ‘One State, Two State; Red State, Blue State!’”

About the Author
Joshua Berman is a professor of Bible at Bar-Ilan University and is the author most recently of Ani Maamin: Biblical Criticism, Historical Truth and the Thirteen Principles of Faith (Maggid).
Related Topics
Related Posts
Joshua Berman
Comments