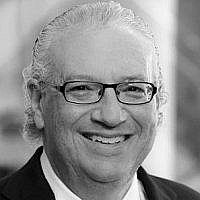 The Blogs
Alan Solow
Apply for a Blog
Please note that the posts on The Blogs are contributed by third parties. The opinions, facts and any media content in them are presented solely by the authors, and neither The Times of Israel nor its partners assume any responsibility for them. Please contact us in case of abuse. In case of abuse,
Report this post.

No solution should be imposed on anyone or by anyone in the Israeli-Palestinian arena.

While American Jewish consensus around Israel policy has not always been easy to attain, this sentiment has stood for decades as the one universally accepted principle undergirding the quest for a resolution of the Israeli-Palestinian conflict – that it must be reached through bilateral negotiations between the parties. This precept allowed Jewish leadership to strongly urge American administrations of both parties not to attempt to implement their own vision of how to resolve longstanding differences between the two sides. Despite expressions of expected or preferred outcomes over the years, every President has endorsed this concept. This principle also allowed American Jewish leadership to credibly oppose unilateral attempts by the Palestinian Authority to declare a state or to otherwise take action without consent to change the status of disputed territories.

Today, however, with Israel’s new government sworn in on Sunday, we are facing a situation where Israeli leadership has announced its intention to annex parts of the West Bank unilaterally, without Palestinian consent. “These regions are the cradle of the Jewish people. It is time to extend Israel’s law over them,” Prime Minister Netanyahu declared on Sunday.”

This threat to proceed with annexation has teeth, both because the Netanyahu government seemingly has the votes in the Knesset to make it happen and because Israel has the military might to enforce its edict upon unwilling Palestinians. The fact that Israel may take such action with the express or implied authority of the United States does not convert this unilateral land grab into a bilateral agreement.

American Jews have an obligation to speak out against imposing a solution on the Palestinians as a matter not only of intellectual consistency, but also because to do so protects Israel’s long-term interests as well as the critical US-Israel relationship. Standing by while Israel uses its military and political power to declare ownership over whatever it wants is a dangerous precedent. There may well come a time when the tables are turned. The current US Administration has already demonstrated a propensity to change course on foreign policy in ways we would have once thought unimaginable. Who thought a US President would continuously undermine and attack our NATO allies? Do we want a future US President who decides that the legitimate claims of Israel are no longer in his or her political interest to be able to announce and impose new policies without Israel’s consent? This is what we have fought to prevent. And what if the Palestinians and their allies gain the upper hand and are in a position to undertake their own annexation of Israeli territory? What shall we say then after we have disregarded the insistence on mutual consent and decided that might makes right? Having abandoned the requirement of bilateral agreement, the United States at that point will be in no position to defend our ally Israel. As the saying goes, turnabout is fair play.

The fact is that nobody is credibly threatening Israel’s control over major settlement blocs in the West Bank which are generally recognized as likely becoming Israeli territory as part of a final status agreement. Israel’s continued control of these Jewish population centers is, as a practical matter, uncontested. The only reason to acquiesce to Israel taking them unilaterally now is to abandon the position that solutions are to be negotiated, not imposed. While some may take satisfaction in this more formal recognition of Israel’s long-standing and sensible claims to these blocs, it is a pyrrhic victory. It will be an announcement that Israel’s long-standing claims for adjustment of its borders to take into account post-1967 realities are not based on justifiable claims but rather on its ability to win wars. We should rue that result.

About the Author
Alan P. Solow is a member of the Executive Committee of Israel Policy Forum and former Chairman of the Conference of Presidents of Major American Jewish Organizations. The views expressed are his own.
Related Topics
Related Posts
Comments