I was close to heaven two years ago, on the night before Yom Kippur. I slept on a rickety cot in a Brooklyn hospice, alone with my terminally ill dad and the experience was unexpectedly transcendental.

My dad has been battling cancer for a long time now. He fought valiantly for close to two years, but the week before he lost the war. The doctors declared the cancer terminal and inoperable.

With the possibility of a cure gone, his doctor felt that there is no need to keep him in the hospital any longer and recommended hospice care instead. That is where people go to die, the doctor, matter of factly, explained. It was, of course, painful to hear, but we had no choice. The diagnosis seemed correct, and the doctor’s suggestion, accordingly, appropriate.

The next day an ambulance transferred him from the hospital to the hospice facility, his new home for the foreseeable future.

Dad took the move much easier than we did. For him the change was merely geographical. He moved from a building on the Upper East Side of Manhattan to a home in Midwood Brooklyn. For his family, on the other hand, the transition was rather painful. He was moving from the home of the ill, to the dwelling place for those are preparing to die.

The change from hospital to hospice also meant a switch in care taking responsibilities. In the hospital, his well being was primarily the responsibility of an elaborate nursing staff, now that responsibility would fall on his family. The task seemed daunting. My siblings and I looked at each other in shock, wondering how we are going to manage.

We could not afford to dwell on it for too long though, dad needed to be taken care of.  We quickly devised a plan to rotate responsibilities. My seven siblings and my mom would take turns spending time at my dad’s bedside, offering him comfort, solace, and care.

The night before Yom Kippur was my turn to be with him. I was dreading it all day. The idea of spending a night alone in a room with a person who is hovering at the door of death seemed scary and overwhelming. I did not want to do it.

When the time of my shift arrived, I dragged myself there, reluctantly entering the room. As I entered, I was confronted by a huge surprise. Turns out that my anxiety about being in close quarters with the soon-to-be-dead was completely unfounded. As soon as dad reached out to hold my hand I realized that my categorization was completely off. Dad was not almost dead, he was merely dying. While dying and soon to be dead seem to be the same, they are not. 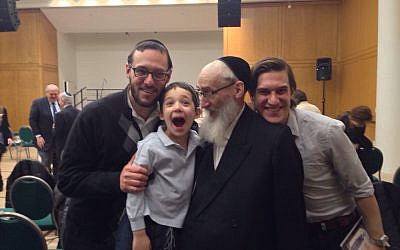 We live in a bifurcated world where people are either dead or alive. My experience that night belied that binary. It taught me that our life trajectory is made up of three stages, not two. The two extremes are indeed dead and alive but there is also a middle stage where we are suspended between the two poles, neither alive nor dead. We are merely dying. Dying is the middle, transitional, stage.  At that transitional point, we are actually hyper-alive.  We breath, think and perhaps eat, but we are no longer involved in the negative aspects of life. Our worries are gone, our jealousies dissolved.

I always looked at Dad with a mix of awe and pity. He had an extremely good life, but it was not easy. He cherished his wife, loved his seven children, and adored his more than thirty grandchildren. Life, nevertheless, was challenging. His parents were immigrants from Europe, via South America. He himself married young and went on to have a fairly large family which needed to be fed and taken care of. He, however, was not properly trained to do that. He had a solid Jewish education, but his secular education was poor. He entered the workforce with almost no professional training, dooming him to a life of toil and hard work, spending his entire professional life in the company of the blue collaret.

With such a challenging life coming to an end, I was expecting life’s disappointments to accompany Dad’s transitional stage as well. It did not. The atmosphere in his room at the hospice facility was Edenic and transcendental. At this point it was all over. Status, success, or achievement no longer had relevance, nor did the frustrations, challenges or disappointments of life matter anymore. The room was quiet, peaceful and unexpectedly serene.

As a matter of fact, it was not just the room, Dad himself also gave off a transcendental vibe. My father, who is South American, (he grew up in Uruguay), exuded the love of humanity of the Argentine Pope Francis and the super-naturalism of Francis’ fellow country man, Gabriel Garcia Marquez.

As dad lay in his bed, his life suspended between heaven and earth, it dawned on me: people with his condition are in a separate group. They are not part of the tribe of livers, but, they are at the same time also not members of the community of the dead.  They instead exist in their own unique space, suspended in the intermediary zone, between life and death.

As much as I dreaded my overnight stay at the hospice, the timing turned out to be impeccable, perhaps even bashert. The existential experience with my dad right before Yom Kippur offered me tremendous insight into the psychological state we strive for on this Day of Awe. Three hundred and sixty four days a year we see the world two dimensionally. On Yom Kippur we take a twenty four hour detour into a third dimension. For that one day we transcend those paradigms, we are neither alive nor dead, but instead are like those who are actively dying, transitioning from life to death. We are alive, but by forgoing sustenance and refraining from pursuing our basic human needs we propel ourselves into a transcendental space

That is perhaps also why some people dress in all white on Yom Kippur. Contra to the macabre explanation, that we wear white to remind us that death is imminent, we don white to position us into that liminal third, transcendental, stage. For one day we stop living, but we do not die.