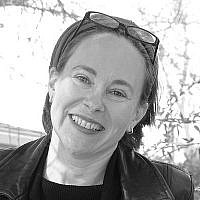 The Blogs
Ilana Blumberg
Apply for a Blog
Please note that the posts on The Blogs are contributed by third parties. The opinions, facts and any media content in them are presented solely by the authors, and neither The Times of Israel nor its partners assume any responsibility for them. Please contact us in case of abuse. In case of abuse,
Report this post. 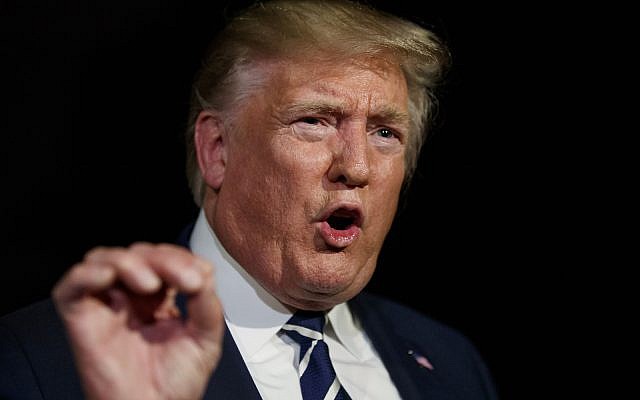 President Donald Trump speaks with reporters on the South Lawn of the White House, August 23, 2019, in Washington. (AP Photo/Alex Brandon)

Living in Israel as a dual citizen, American and Israeli, is a killer this week. People go about their business as if it were an ordinary week and I feel ever more distant.

This presidency has set back years my integration as an Israeli citizen because of the unceasing need to read American news and then to seek comfort or action or shared mourning or simply identification among my American friends through social media, email, phone calls, petitions, and small donations. Like me, my American friends have lived a four-year haze in which no matter what personal good things happen — a child’s success, a new book written and published, a delicious meal — we harbor an underlying sense that all is terribly wrong and that these small and possibly big good things cannot counter the wrongness.

Like so many others, I went to sleep on election night 2016 counting on Hilary. Israel is hours ahead of the US and so when I woke up, the news was extremely fresh. I left home out of the inability to sit in one place and took myself to a diner that masquerades as a café, where a group of old men gather each morning, newspapers and coffee in hand. I had chosen precisely the wrong place to gather my thoughts. The men shared a laugh, “Ah, so Trump won, the world is full of surprises.” They laughed as spectators. Ah, absurd world.

And when I could not but enter into the conversation, being nothing so philosophical as a spectator, and having cast my absentee ballot in Michigan, which narrowly went red, one of the men took genuine interest. “You are truly upset,” he said. “Why do you care so much?” he asked. “Isn’t it all the same anyway? How different will it really be, Hilary or Trump?”

It has been different in my body every single day. It has been different in my mind. In my psyche. Keep in mind that this is true in spite of the fact that I live thousands of miles away, work a job in a different country, hold another citizenship, and am unaffected on the day-to-day by state and federal policy, by Supreme Court decisions. My family has state health care in Israel, my marriage is protected by law, and for all our prime minister’s cynically targeted racism, his corruption, and his deceptions, he does not risk outright statements of misogyny or mockery of the disabled, nor does he brag about sexual violence. He has a fundamental respect for science and for the difference between truth and lie, conspiracy and well-founded research, expertise and ignorance.

Things are bad in Israel and, for months, a broad left that had been thought dead has been gathering en masse to protest. The protests are directed at the indicted prime minister, but the rage has sub-categories too: rage at the way the coronavirus has exposed massive dysfunction and inequality in the nations’ underfunded school and health systems; rage at the fashion in which a coalition government ready to sit with ultra-Orthodox leaders, but not with Arabs, is forced to make decisions that harm the broad public health and well-being; and, unfortunately, last and possibly least, rage at, or at least recognition of, the ongoing military occupation of three million Palestinians.

I list all this to clarify that the Israeli reality is not a pretty one. Yet, as an American, all I can say when I see the protesting Israelis (and sometimes I join them) is: You don’t know the half of it.

Here in Israel, there is still a ground for outrage, which means that there is still a reality worth believing in. Your shock-meter is not the main organ for taking in the news. You don’t find yourself staring aghast at your newspaper app, wondering how a man so radically deficient in intelligence, humanity, humility, and fear of eternity or any other transcendent thing, could be taking up so much space, commanding so much and so very many singular forms of power, and requiring so many adults to pretend he can serve the functions of the office. It is an assault on all orders I know and believe in.

Like other white Americans, I have asked myself if what I now know is a fingernail’s worth of what it is like to live in the US as a black person. In a very particular sense: the certain knowledge that being right, or innocent, or vulnerable, or logically sound will not help you. The sure cold shudder of knowing that power is turned intentionally against you, and that those who wield power are not ever going to give up without violent incitement and violent action against anyone trying to expose or fight them.

Over the last year or so, my 10-year-old daughter and I have read aloud a series of books that came out in my childhood in the ’70s. The books were written by Mildred Taylor and follow a black family through the aftermath of slavery into the middle of the 20th century. For me, the dominant takeaway of reading those books aloud today is recognizing a psychological consonance: the pulse and breath-quickening recognition that justice is nothing to be counted on, that consolidated authority is not benevolent, and that no one but an occasional untaught child expects otherwise. Those books insist that there were Supreme Courts that had no RBG, and that there were Confederate strongholds well before there were monuments. Innocent bird-watching was presumed open season and black bodies were property of everyone except those who loved them.

So we white Americans, and Gen-X Jewish-Americans who rarely confronted anti-Semitism, and educated people with enough money to have a secure home and stable food supply, we see that, as it turns out, we lived in the other America. That is a valuable thing to learn.

Yesterday, the weekend Israeli Haaretz ran a set of op-eds on the American election. Many Israelis think Trump is the best friend Israel ever had. But the lefty paper does not skew that way. Still, I read two lines of an op-ed that began something like this: “Americans thought the country would crumble, that its democratic institutions would be severely tested, that non-whites would suffer visibly. But the sun kept shining and it is four years later” (emphasis mine).

Like those old men at the café, native Israeli spectators and any other spectators can sing themselves the truisms that it makes no difference who is in charge, that nothing really happened to America, or to the Constitution, or to the separation of powers, or to American women, or to scientists, or to public servants from the military to the intelligence to the national health foundations, or to the right to vote in safety and confidence. They can say it has always been the case that politicians lie and that they pass the buck and that this has been no different. That 220,000 lives would have been lost even if we had had a president who had fought the virus with all the power, guidance, and information she had.

Beyond casting votes, do we have a refuge when we hear those refrains? I would say, look in the eyes of other Americans, wherever they live, who love their country and love their humanity, and repudiate four years of business-not-at-all-as-usual. We are the proof — the absolute, immanent, irrefutable proof — that human actors matter. For those arguing that four years of horror have sped reform, I agree that we can never foresee all the consequences to great wrongs. It is true that a strong enough dose of wrong can impel right like nothing else. But that knowledge is no exoneration, nor is it a means of controlling wrong. It is simply acknowledging our lack of omniscience.

Human actors matter. Human judgment and conscience and intention are the tools we have to work with, in this world. There is always a difference.

About the Author
Ilana Blumberg is the author of the memoir, Open Your Hand: Teaching as a Jew, Teaching as an American (Rutgers UP, 2019), where she writes about her experiences teaching in a wide range of classrooms, from kindergarten through university. Ilana directs the Shaindy Rudoff Graduate Program in Creative Writing at Bar Ilan University, Department of English.
Related Topics
Related Posts
Comments