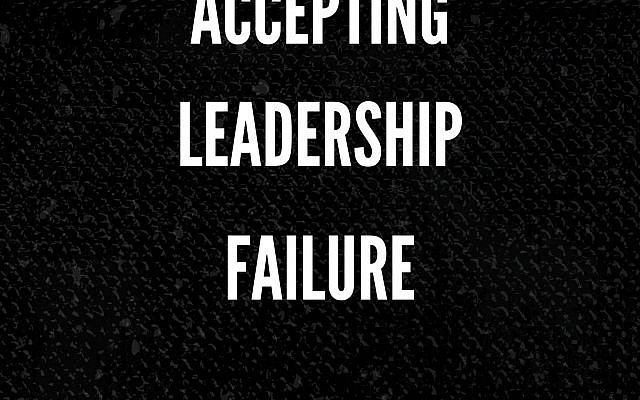 As the worst of the COVID 19 crisis seems to be behind us, but with the situation still dire and critical all over the world, many of us have begun to think about what went wrong. How were some cities and countries particularly affected while others were not? Why were some nursing homes decimated, while others seem to have been spared? Ultimately, we do not have clear answers for these questions. These are theological questions that are largely unanswerable, but that will not stop us from trying.

We have started looking at our leaders, elected officials, spiritual leaders and heads of institutions for some of these answers. We have begun praising or criticizing our leaders for how they handled this crisis. This makes sense. Being a leader means taking responsibility, and some leaders have demonstrated incredible wisdom, foresight and compassion during this time. Others have not.

I want to focus on the leaders that have made mistakes. This is not going to be a popular opinion, but I nevertheless feel like it is important to say: Leaders make mistakes and that is okay. We even need to forgive our leaders for their mistakes and allow them to continue to lead. I say this because I believe it, but also because I believe that it is one of the central themes of the Torah and the book of Leviticus.

Unlike other religions, the Bible does not shy away from criticizing our leaders. Judaism clearly asserts that he founders of our faith were human, and as humans they were fallible. Our religion encourages us to analyze the decisions that Abraham, Moses and David made and to learn from their mistakes. This tradition of thinking critically about our leaders is predicated on the most sacred of Jewish beliefs –the belief in teshuva – that people can learn from their mistakes and become better people. Just as you and I can do teshuva, so too can our leaders.

In this week’s Torah reading we learn about the Yom Kippur sacrifices. One of the most interesting components of the Yom Kippur service is that at the center of the service is a sacrifice that the Kohen Gadol, the High Priest, brings to atone for his own sins. Every year, the spiritual leader of the Jewish people would go before the nation, and before God and admit to his mistakes, failings and weaknesses. And he would be forgiven. The Torah presents an amazing model for us which allows us to accept our leaders, even if they are flawed and even if they do make mistakes. And we can forgive them.

Imagine if we had a comparable system for today’s religious and political leadership! It seems almost unimaginable. Today, when a politician or public figure apologizes, it is rarely seen as sincere, and for the rest of their lives their mistakes are mentioned alongside their names. We live in a world where we do not allow our leaders to change and to do teshuva. This is a great tragedy.

I am not suggesting that every mistake and every leader always needs to be forgiven. Thank God, we live in a healthy democracy, and hopefully this horrible experience has allowed us to see that certain leaders do not have the wisdom and judgement to continue to lead. We will be able to replace those leaders through a fair and democratic process. Nevertheless, as we begin to examine the choices that our leaders have made in the past few months, it is important for us to remember that our leaders are fallible humans, just like me and you. Just as the High Priest was able to make mistakes and be forgiven, so too can we forgive our leaders, especially in this time of crisis.