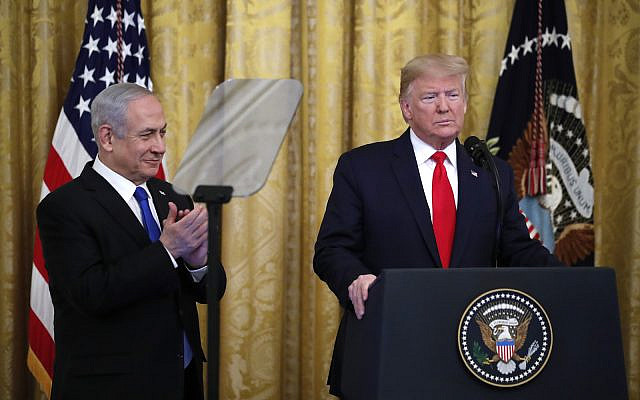 President Donald Trump pauses as he announces a deal for Israeli-Palestinian peace with Prime Minister Benjamin Netanyahu in the East Room of the White House, January 28, 2020, in Washington. (AP Photo/Alex Brandon)

The Trump plan for Palestinian-Israeli peace will almost certainly go the way of all the other failed blueprints intended to resolve our hundred-year conflict. With leaders across the Arab world backing Palestinian opposition, the plan will likely remain an American-Israeli conversation about peace, a wedding without the bride.

And yet the release of the plan has already had one bracing consequence: it has exposed deeply held myths about peace among both Israelis and Palestinians.

The Israeli myth is that the current status quo can be indefinitely sustained, and that the international community, distracted by more immediate and overwhelming tragedies in the Middle East, is losing interest in the Palestinian issue. But the Trump administration’s considerable investment of energy and prestige in devising its plan has reminded Israelis that the conflict cannot be wished away.

Israelis, like Palestinians, have largely despaired of a solution. As a result, Israeli political discourse has turned to issues of religion and state, political corruption, the cost of living. The Palestinian issue has hardly been raised in the seemingly interminable rounds of recent Israeli elections; even the left has largely ignored it.

But with the release of the Trump plan, Israelis are once again arguing over the viability of a Palestinian state and the fate of the settlements.

The Trump plan has re-opened one of the most significant but least noted divides in Israeli politics: the split between the pragmatic right, which under certain conditions accepts  territorial compromise, and the ideological right, which opposes any West Bank withdrawal. Even as Prime Minister Netanyahu enthusiastically embraced the Trump plan, settlement leaders deeply opposed it. Though the plan offers the Palestinians only 70 percent of the West Bank – considerably less than previous offers – it still conforms to the basic principles of those other plans: a Palestinian state with a capital in East Jerusalem, however symbolic.

Worst of all for the ideological right, the Trump plan would limit the ability of settlements to expand, turning them in effect into islands surrounded by Palestinian sovereignty and threatening the long-term viability of the most isolated settlements. That the most pro-Israel administration in memory is presenting a plan whose principles are anathema to the settlement movement is another reminder to Israelis of how deeply the two-state solution has become embedded in international expectation.

The Trump plan also challenges a key premise on the Palestinian side: that Palestinian leaders can continue to reject peace plans without paying a political price.

The trajectory of peace offers over the decades tells a stark story: with each Palestinian rejection, the map of a potential sovereign Palestine shrinks. Arguably no national movement has rejected offers for statehood more often than the Palestinians – from the 1937 Peel Commission, which offered the Palestinians 80 percent of the land between the Jordan River and the Mediterranean Sea including the West Bank, through the 1947 UN partition plan offering 45%, through President Bill Clinton’s December 2000 offer of 22%. Each of those plans was endorsed by the mainstream Zionist and Israeli leadership.  The Trump Plan has further reduced the map.

It is long past time for Palestinian leaders to do what they have never done in the history of this conflict: offer their own detailed peace plan. We know what Palestinian leaders oppose; but what exactly do they support? Beyond the repetition of the formula of “two states along the 1967 borders,” what is the Palestinian position on refugees, land swaps, settlement blocs, holy places?

Some defenders of the Palestinian leadership cite the Saudi Peace Plan of 2002, which the Palestinian Authority endorsed. But the Saudi plan – hastily conceived to deflect American criticism of the Saudis following the September 11 atrocities, and presented to Israel as a take-it-or-leave-it ultimatum – is vague on precisely those details, like refugee return, that require a clear Palestinian position.

The long history of Palestinian rejection of peace offers, sometimes followed by waves of terrorism, has left Israelis deeply skeptical of Palestinian intentions. Israelis across the political spectrum fear that a West Bank Palestinian state could fall to the radical Islamist Hamas, which would launch rockets and other terror attacks against Israeli cities, as it routinely does from Gaza. With Iranian forces in Syria and pro-Iranian terror groups entrenched on Israel’s northern and southern borders, a hostile Palestine would complete the country’s encirclement. Given the region’s instability, few Israelis are prepared to risk that option anytime soon.

To once again commit to a resolution of the conflict, Israelis need to hear an unambiguous Palestinian vision of peace. At the same time, Palestinians need to hear an Israeli reaffirmation of our past commitment to a viable Palestinian state. Legitimate Israeli security fears are no excuse for taking steps – like Netanyahu’s intention to unilaterally annex settlements – that undermine the long-term prospects for a two-state solution. The Trump plan reminds us that unrestrained settlement building is unacceptable even to our friends. In this painful moment when a solution seems more elusive than ever, both sides need to reexamine the illusions that shape our discourse over peace.