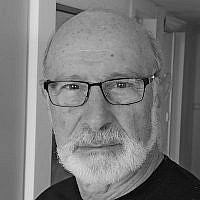 The Blogs
Roy Pinchot
Apply for a Blog
Advertisement
Please note that the posts on The Blogs are contributed by third parties. The opinions, facts and any media content in them are presented solely by the authors, and neither The Times of Israel nor its partners assume any responsibility for them. Please contact us in case of abuse. In case of abuse,
Report this post.

Many people believe Herman Melville’s 1851 book, Moby Dick, to be among America’s greatest novels. It is a story of whaling Captain Ahab’s obsession with destroying the great white whale that took off his leg in a previous encounter; it is a frightening exploration of obsession leading to disaster. At the end of the novel, the whale ends up destroying everything that sought its end: Captain Ahab, the whalers, and even their ship Pequod. The greatness of Melville’s novel lies in holding a mirror to our own behavior, where obsession leads to disaster.
Does the obsessive crusade of key Democrats to take down Donald Trump during

his term in office contain shadows of Melville’s novel? Will this obsession reach fulfillment or will it, like the novel’s final scene, result in an ending that destroys the actors and what they seek to accomplish?

It can be argued that the continuing attack on President Trump from his inauguration to his last days in office finally pushed his delicately balanced psyche far off-center. Unable to respond to the continuing attacks on his legitimacy, Trump looked to his reelection win as a vindication of his legitimacy as President. Denied victory at the polls, he retreated deep into a persecution complex, claiming the election was stolen from him by unknown or unproven conspiracies. During a speech in front of the White House, in a moment of unguarded irrationality, he lashed out at the mysterious “others” who stole the election and demanded that the Vice President and other Congressional leaders invalidate the Electoral College results. Following his speech, a group broke off, marched to the Capitol and gathered outside. While some, unhindered, broke into the building, roamed the halls and occupied offices, others used violence, fighting police and frightening Senators, Representatives and Congressional officials.

Democrats and other progressives, seizing on this invasion of the Capitol, saw a chance to finally drive their harpoon into the heart, destroying the great white whale that been their nightmare, dominating their political lives for the previous four years.

As a result, key Democrats laid plans to quickly impeach the President a second time and again try for conviction. They charged the House of Representatives to rush through the normal procedures and vote out Articles of Impeachment, even though legal opinions were split on whether the President’s speech was legally “incitement.” In addition, the pressure was put on various administration officials to declare Article 25, removing the President as being mentally unfit for office.

Being so obsessed with destroying Trump, Democrats were willing to jeopardize the glory of Biden’s inauguration and victory celebration by having Trump’s second impeachment steal the nation’s headlines – ironically, allowing Trump to dominate the publicity and headlines they continually tried to deny him for the last four years.

Piling on to this drive to destroy Trump was the new progressive captains of industry, the owners and employees of America’s media empires: newspapers, TV networks, and most critically, social media platforms. These declared Trump, his allies and Republicans to be radioactive and demanded the most severe public censure possible, including removal from Congress, removal from organizations, being subject to investigations, the negation of legal contracts, loss of funding, do-not-hire pronouncements, declaring defense lawyers to be pariahs, universities rescinding elected officials’ advanced degrees, and calling for extensive public shaming – even though many had not exceeded their legal rights as Representatives, Senators or lawyers. Cancel culture run wild!

The tragedy of Moby Dick is of course its ending, where the obsession of Captain Ahab has caused the whale, purely by reflex and without forethought, to destroy everything Ahab sought to accomplish. Can Melville have prefigured the ending of our current tragedy? The excesses of this hunt to destroy President Trump along with the collusion of the progressive social media platforms in censoring individuals and political speech, and removing or blocking sites and even competing platforms, has awakened members of both parties of the government to how powerful a handful of companies have grown, becoming quasi-monopolies with the power to regulate, control, and even deny the flow of free speech in the United States. The actions of the electronic media platforms awakened legislators to the inherent danger that resides in the fact that political beliefs have guided the owners and workers in this giant industry to regulate and filter what they believe to be the “correct and incorrect” flow of information to the US public.

Has President Trump, with the last splash of his giant tail, and without forethought or intent, unconsciously put the spotlight on what his constituents sought from the beginning: breaking the hold of the progressives on what Americans see, hear and read. Without doubt, social media platforms will soon be fighting for their lives, attacked by the Attorneys General of many states, and testifying in front of Congressional Committees investigating anti-trust and freedom of speech issues that could presage regulation or threaten to break up their multi-billion-dollar international companies. Is this Moby Dick’s revenge!