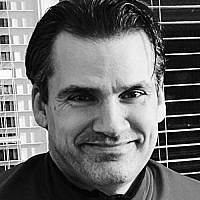 The Blogs
Jonathan Scott
Apply for a Blog
Please note that the posts on The Blogs are contributed by third parties. The opinions, facts and any media content in them are presented solely by the authors, and neither The Times of Israel nor its partners assume any responsibility for them. Please contact us in case of abuse. In case of abuse,
Report this post.

Tikkun Olam – Working together as one in “Repairing the World”

It takes real courage these days it seems to be a Democrat attending AIPAC.

There are so many forces at work today discouraging Democrats across America from attending the largest gathering of friends of Israel in the world. Some twenty thousand in attendance in Washington D.C March 1-3 at the Walter E. Washington Convention Center are attending and demonstrating support for the partnership and relationship between the United States and Israel.

It is clear there are many Democratic leaders missing the opportunity to connect with AIPAC members. Senator Corey Booker (D) and Mayor Michael Bloomberg however, have determined to attend and present at the conference today in the face of great pressure not to attend.

Progressive groups Like MoveOn, IfNotNow,  Indivisible and Working Families Party in mass formed a coalition calling for Democratic Primary candidates to #SkipAIPAC. Recently, IfNotNow even went as far as to protest Vice President Joe Biden’s Philadelphia headquarters leading up to this weeks event in an attempt to persuade Biden from attending the conference.

Regarding those Democrats who plan to attend AIPAC, it is the contention of IfNotNow that:

“Together they’ve built a shameful legacy of shielding the Israeli government from consequences and doing nothing to end Israel’s brutal military occupation that strips Palestinians and Israelis of their dignity and freedom.”

IfNotNow further advances a version of the Progressive mindset in terms of opposing AIPAC and the very policies the organization advocates by claiming “one of the many ugly facets of what the money going towards the occupation really supports: the unlawful arrests of Palestinian children”.

It is language often that becomes the point of contention amongst the American Jewry. The use of terms like “occupation” by Progressives coupled with no admission that the Israeli disengagement from Gaza in 2005 ever happened. Progressives refuse to have any conversation regarding the condition of Gaza today and the quality of life for its people. By demanding that Israel disengage from the West Bank, there appears no appetite for discussion regarding the current state of affairs in Gaza now fifteen years post disengagement. No real solutions can materialize addressing Palestinian desires without first examining Gaza.

Characterizing the Palestinian issue as an “endless occupation” is a non starter for majority of AIPAC members.

The Progressive anti- Israel advocacy groups are championed  by many on the American Left and many of its biggest champions hold seats in the House of Representatives who openly attack Israel. Members like Rep. Ilhan Omar (D) and Rep. Rashida Tlaib(D) have become a defining voice of anti-Israel in the Progressive movement afoot in America. The support of Boycott, Divestment and Sanction (BDS) cannot be downplayed to the 100,000 members of AIPAC. Even leading candidate for the Democratic nomination Senator Bernie Sanders has slandered the State of Israel and its people by calling the state a platform for bigotry.

Furthermore, the Iran Nuclear Deal 2015 is a contentious issue with many Jews, especially Israeli Jews living in the United States. It is not lost on many members of AIPAC there is a great debate growing in the Democratic Party. Both Bernie Sanders and Elizabeth Warren both supported the deal in the United State Senate on behalf of President Obama yet is deal was largely opposed by AIPAC as not in the interest of the Israel or the United States because of the expiration provisions negotiated in the deal.

Michael Bloomberg the former Mayor of New York City and Democratic Presidential contender spoke this morning and addressed his support for Israel and foreign aid provision for military assistance and the 500 million missile defense systems initiative to support the Iron Dome. Bloomberg provided reassurances  to AIPAC that he would not move the embassy from Jerusalem and stated his opposition to the BDS movement on college campuses. Bloomberg went on to denounce the fact that Bernie Sanders has failed to appear at AIPAC for thirty years and condemn Sanders for his comments declaring AIPAC a “racist platform”calling Sanders “dead wrong”.

Paul Begala, Democratic Political Consultant weighed in at AIPAC today and declared that Bernie Sanders and others are not attending AIPAC is a mistake. Begala went on to say that it has been an even greater mistake for Bernie Sanders not to visit Israel and evaluate himself what is happening on the ground.

The last thing that Democrats should be doing is withdrawing  or “boycotting” AIPAC. The fact remains that while protesting and boycotting has gotten trendier and trendier in American politics, to not provide voices at the largest policy organizational gathering concerning the U.S-Israel relationship is disastrous for the Democratic Party.

AIPAC typically draws an equal number of Democrats as it does Republicans to the annual conference that also includes a Congressional lobby effort. This years effort will take place on Tuesday, March 3. So it really begs the question what in truth can be gained by Democrats boycotting AIPAC given Democrats will need every vote they ban muster in the Presidential election this November.

Boycotting demonstrates a lack of vision, leadership and courage. The effort of AIPAC is to provide a face and a voice to policy and it its in every Democrat’s interest to participate. In the last few weeks, Democrats have had three Jewish Americans on the debate stage and very rarely have any of them addressed Israel in a positive light. Sanders, Bloomberg and Steyer all come from Jewish traditions and as of the last debate had not engaged Jewish Americans regarding any of their plans or policies with regard to the State of Israel. In fact, Senator Sanders on the campaign trail has alienated some by merely advancing the political narratives of the Progressive left advocacy groups demanding leaders #SkipAIPAC.

Does the action of boycotting display the level of leadership in truth the Democratic Party deserves. Jewish Americans vote Democratic in America by almost 70%. The messaging coming across to many today is that the Jewish vote is simply being taken advantage of by the establishment. It would have been wiser for Vice President Biden to address AIPAC in person over video message given Michael Bloomberg’s performance today. Jews want to have the confidence that Democratic candidates demonstrate the connectivity and importance of the relationship that America must have with Israel as partners.

By not physically participating at AIPAC it appears that Joe Biden, Bernie Sanders and Elizabeth Warren are publicly stating in effect that they do not endorse the policy position that Israel should be provided 3.3 billion in foreign aid by the United States and that Congress should not authorize such funding without something in return. Jewish Americans on both sides of the political aisle should be concerned by this if for no other reason that in October of this year the United Nations arms embargo on military equipment against Iran  will expire. There has been little mention of this fact in any of the Democratic debates nor any question posed  by any of the media networks carrying the debates.

Iran is a significant threat to peace and security in the Middle East and a direct threat to the State of Israel. The failure of Senator Sanders and Senator Elizabeth Warren to have any real Iranian policy should alarm the entire American Jewry. Both Senators have failed to attend AIPAC again this year and back in January were united in a declaration of opposition to any kind of war with Iran but there are very few forces at work seeking that end. Warren has accused the rising tensions in the Middle East and with Iran in particular as “a crisis of Donald Trump’s making”. This assessment fails to address the role of Iran and its proxies all over the region that have been the proponents of virtually all of the terror attacks that have occurred in the last year. The Senators have been highly critical of President Trump policy but have yet to articulate a single plan to address the security threat that Iran poses not only to Israel but the the United States as well.

The Israeli election today that most participants at AIPAC are playing close attention to very well may demonstrate whether the Middle East Plan advocated by President Trump is vindicated or rejected by the Israeli people. It is clear that neither Senator Sanders or Senator Warren support Prime Minister Netanyahu in Israel. Vice President has been less public in his views on conditioning Israeli aid by the United States. Today’s Israeli election results could reset some of the narrative in the Democratic primary to nominate a candidate regarding positions on Israel.

About the Author
Jonathan Scott provides political commentary, written campaign releases, statements and presentations for political campaigns and been a political ghost writer for five years. A veteran of the armed forces raised in Virginia, Jonathan leads a Jewish life in Washington D.C. and is married to a Jewish educator.
Related Topics
Related Posts
Comments