The Blogs
Jay Engelmayer
Apply for a Blog
Advertisement
Please note that the posts on The Blogs are contributed by third parties. The opinions, facts and any media content in them are presented solely by the authors, and neither The Times of Israel nor its partners assume any responsibility for them. Please contact us in case of abuse. In case of abuse,
Report this post. 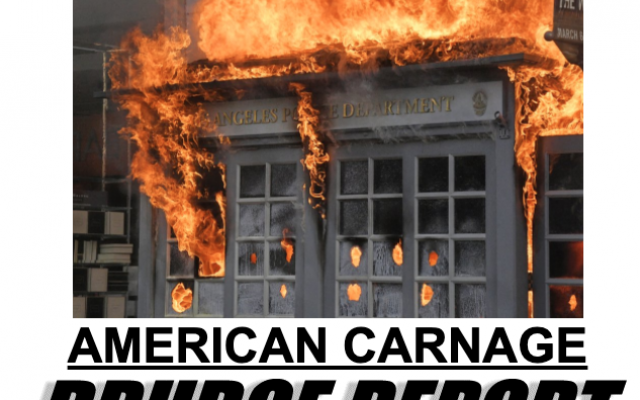 All of this has happened before and will happen again.

“Crazed Protestors ignite NYPD vehicle, throw bottles at cops”; “Wave of rage and anguish sweeps dozens of U.S. Cities”; “Tear gas and burning cars in US cities as governors in several states call in National Guard troops”; “Protests turn violent, unrest sweeps the nation”. These headlines will greet Americans with their morning coffee this last Sunday of May, 2020, nearly 244 years after the founding of “Greatest Democracy on Earth”. Just a few days after a horrible and criminal killing of a black suspect while in Minneapolis police custody, America is witnessing yet another period of bloodshed over actions caused by overt racism.

In my adult lifetime I have seen this before, too many times unfortunately. From the L.A. riots after the Rodney King verdict to when the State of Florida called the murder of an innocent teenager, Trayvon Martin, acceptable at the hands of a trigger-happy George Zimmerman. George Floyd’s name perhaps will be synonymous one day with the straw that broke the divided back of a once great, and promising nation, one which was built to ensure these divides did not impede the lives of ordinary people yearning to be free.

Controversial Harvard professor Cornel West theorized Friday night that “We are witnessing America as a failed social experiment” and attributes this decline to capitalism and a militarized nation-state. Dr. West, a professor of Philosophy, went as far as to allude to former President Barack Obama’s part in this failure, even “black faces in high places” were unsuccessful at bringing change because they were enablers of the capitalistic war-machine known as America. That black people in power, in celebrity have become swept up in the materialism and fame and forgot “their” people or from where they came.

Now, I know Dr. West well, I helped organize protests of his speeches for our Queens College Hillel chapter in the early 1990’s when he was advocating against Israel. The man can be as racially insensitive to others as he believes most white people are to blacks. He is a harbinger of racist conspiracy theories, yet he is a fierce and compelling advocate for his community – the African-American community as well as other minority groups like Mexican-Americans and Arab-Americans. Which brings us to the problem with America in the first place, with all the various ethnic groups that make up the “melting pot” of American society, very few are actually American. The contents of that pot have not congealed, rather they have separated as neatly as an unshaken bottle of Italian dressing.

Dr. West is not wrong when it comes to what we are witnessing. We are watching a destruction of the dream made real by a group of true progressive thinkers from the 18th century who believed people have more in common, despite cultural differences. The founding fathers of the United States truly were visionaries, bold and determined to break free of the comfort and status that the flag of England brought in order to offer equality and freedom to all. Any American history student who memorized the Federalist papers, the “Talmud” behind the “Mishnaic” constitution will know the struggles these mortals went through to reconcile their own biases in order to deliver the foundation for a free and open society.

Most people do not understand America, and I include Americans in this grouping of “most people”. They believe that “give me your tired, your poor, your huddled masses yearning to breathe free” was the promise of America and an entire generation was raised with this notion. In fact, the phrase is famous, from a poem, ‘The New Colossus’ written by a Jewish poet, Emma Lazarus over 100 years after the founding of America and represents an idealistic notion of what America was at the start of the Industrial Revolution – a country that was struggling to thrive, had lots of vacant land and needed bodies to sow and reap it.

Indeed, America was founded as a nation of freedoms for her citizens that had been unseen since the times when the pre-Caesarian Roman Senate was the dominant force in the world. It was founded with the intent to be a nation of people who share little culturally; a place where how you prayed, who you prayed to and when you did so was not mandated by a governor or self-anointed “prophet” of God in the form of a mortal, flawed and decadent King. The point of America was to be a new country, with new ideals. After the 1776 Declaration of Independence ratification, Thomas Jefferson, the wordsmith of the American vision never once identified himself as a Welsh-American. Benjamin Franklin was not an Englishman anymore, certainly not a British-American. They were all simply, American.

America is a divided mess waiting to fall apart. Perhaps, Cornel West is even right about the part inequality and materialism play in this fall. However, the main reason has more to do with the polarization that movements such as Dr. West’s create, and the impact on overall society. In a country filled with hyphenated Americans, who is actually loyal to America? I grew up Jewish, on the Lower East Side of New York in the 1970’s and 80’s. I was a New Yorker, an American who was Jewish. I did not self-identify as a Jewish-American, or a mix-breed Pole/Russian/German-American. One had nothing to do with the other.

My wife and I moved to Israel with our four small children in 2006 when my identity as a Zionist became more important to me than my identity as an American. As a Jew, I was comfortable in America because my loyalty to my country was in-part due to her promise that my faith is mine to determine, I felt at home. Religion and nationality are two different things and in America, you were free to be who you wanted to be. Today, if you want to be an American, you must have a hyphen defining what type of American you are in order to be accepted by the new progressive philosophy. This single thing alone can be blamed for much of the disunity within America.

A nation requires nationalism from its citizens and in 2020 America, nationalism is a four-letter word spoken only by “right-wing fascists” and Republicans. People in power like Alexandria Ocasio-Cortez and Rashida Tlaib, freshmen congresswomen who made their mark on social media more than in the halls of government publicly vilify the “N” word – as if having pride in, love for and appreciation of your country is a bad thing. The political correctness of identifying your ethnicity over your nationality has damaged America beyond repair and we are witnessing the ramifications of that.

These thoughts in no way suggest racism does not exist in America and people of color are not subjected to discrimination. It does, and they are. Period. My observation is the problems in America have less to do with the visible differences between people, but rather the flaunting of those differences that in many instances borders on taunting. This is not to excuse racists, the officer who knelt on George Floyd’s neck should spend the rest of his life in prison, not because he is responsible for unjustly killing a Black man, but because he is responsible for unjustly killing. Yes, if I was the one being detained odds are I would still be here to write this, this is part of the problem and it is exacerbated by the tribal nature of hyphenating our identities.

Being black, brown, yellow, gay, straight, Jewish, Evangelical, Buddhist even Scientologist does not make a person less than their nationality – as a matter of fact, it enriches their nation to have such diversity if and only if, one is not in conflict with the other. According to the founding fathers’ dream for America, the freedoms to be who you are was what the country was all about and yet, read through the past few decades of congressional minutes and it would seem as if the status of an American is defined only by the group from which they came.

America was created as a nation that would proudly absorb the cultural differences of her inhabitants, and display them under one, united flag. New immigrants swear an oath to become Americans. They swear off allegiance to any other foreign entity or government. They promise to be Americans. However, in reality, they are marginalized by their own special interest parties, their own ethnic advocates who put allegiance to an idea, an ethnicity, a culture above America. Even those born in America today are splintered off into groups – and the sad part is the government of the people is the one which enables it all and rarely acts in the interests of the people.

If America is to survive as a republic, it must recognize that it is the differences within the population that make it special. That the freedom each citizen has to be who they are is what makes America unique and special, and that subverting the nationalism for allegiance to a culture or ethnicity is not the way to build one nation from the many who have come to her shores. There is much to heal, and much to fix. None will ever get done if everyone stands in their cultural “groups” corner, arms crossed and angry staring at all the other groups.

One Nation Under God – One.

About the Author
Jay Engelmayer is a 49 year old husband and father of four. Professionally his focus has been digital marketing and business development for commercial products. A proud and unapologetic American-Israeli Zionist, he enjoys cooking and yelling at television screens. Some consider him argumentative in nature, although he prefers "purposeful cynic" when describing his disposition. Living in Israel, he hails from New York City and is glad he left before it became the 1970's redux it is today.
Related Topics
Related Posts
Comments