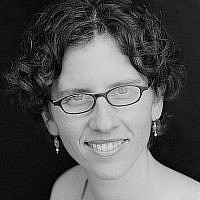 The Blogs
Laurie Zimmerman
Apply for a Blog
Please note that the posts on The Blogs are contributed by third parties. The opinions, facts and any media content in them are presented solely by the authors, and neither The Times of Israel nor its partners assume any responsibility for them. Please contact us in case of abuse. In case of abuse,
Report this post. 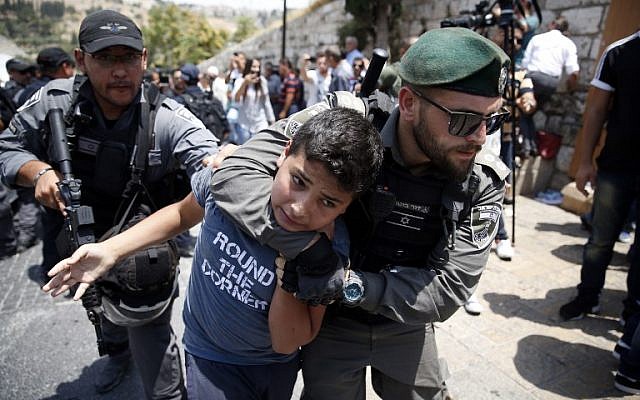 A mother and father panic as soldiers burst into their home, pull their teenage son out of bed, handcuff and blindfold him, and drive away with him, leaving them with no information about where he is going, what he is accused of, or when they will see him again. The soldiers interrogate him for hours with no access to a lawyer or parent present. His requests for food and water, or use of a toilet, are denied. Terrified, he is subjected to physical and verbal abuse and he is detained for weeks or more in pretrial detention. He has no knowledge of his rights, and he signs a confession written in a language he does not understand. He will do anything to return to his family.

It’s a parent’s worst nightmare. Yet this nightmare is a reality for hundreds of Palestinian parents whose children, sometimes as young as 12-years-old, are arrested and interrogated by Israeli soldiers in the occupied Palestinian territories.

My heart breaks when I read these stories. No parent — and no child — should have to endure this kind of trauma. I feel a particular responsibility to speak up not only as an American citizen whose tax dollars support the occupation’s infrastructure, but also as a rabbi who believes in the inherent dignity and worth of all human beings. As a leader within the American Jewish community, which pours extraordinary resources into Israel, we should be the first to stand up and condemn Israel’s unjust treatment of children, making sure that funding to Israel does not go to support for human rights abuses.

That is why I applaud Rep. Betty McCollum (D-MN) for introducing legislation on November 14 seeking to guarantee that the annual aid provided by the US government to Israel is not used for the detention of Palestinian children. The bill, Promoting Human Rights by Ending Israeli Military Detention of Palestinian Children Act, would prohibit taxpayer dollars from being used to support the military detention, interrogation, or abuse of Palestinian children carried out in violation of international law.

I have traveled to Palestinian villages in the West Bank several times, and spent a fair amount of time with Palestinian children and teenagers. I shudder when I think that they could be among the thousands of young Palestinians who have suffered from this systematic abuse. These children are like any children; they are learning to navigate their world, explore the consequences of their actions, and build relationships with their peers. They can be impulsive, absent-minded, and oblivious to others in one minute and empathetic, thoughtful, and full of laughter in the next.

They are also quite different from children who grow up in relative safety. They are forced to learn survival skills under the weight of the Israeli military occupation — skills my children will hopefully never have to learn. Skills like how to pass through a checkpoint to get to school, how to avoid settlers who taunt them, how to endure curfews that keep them cooped up for days. Skills like how to wake up, day after day, when they, or their loved ones, have been forcibly taken into military detention, tortured, and imprisoned.

The stories documented by Israeli human rights organizations, along with Defense for Children International, UNICEF and Human Rights Watch, are not the tales of a few rogue soldiers. Rather, in the words of UNICEF’s 2013 report on Palestinian children in Israeli detention in the occupied territories, “the ill-treatment of children who come in contact with the military detention system appears to be widespread, systematic, and institutionalized.” According to the report, an estimated 700 Palestinian children aged 12 to 17 are arrested, interrogated, and detained by Israeli army, police, and security agents each year. Lest we think that this applies mostly to 17-year-olds, Defense for Children International documented a steep jump in the number of 12- to 15-year-olds held in military detention in 2016.

This is also the case in East Jerusalem, where Palestinian residents live under civilian law. According to a recent report by Israeli human rights organizations, B’tselem and HaMoked, child detention is a regular practice in East Jerusalem.

There is a reason, regardless of guilt or innocence, that minors are entitled to special protections under international humanitarian law. Children and teenagers are more vulnerable than adults. They are also still developing and do not yet have the emotional and mental capacity to be fully responsible for their actions.

Israel obligated itself to uphold international juvenile justice standards by ratifying the UN Convention on the Rights of the Child in 1991. It has pledged to uphold the principle that minors should only be deprived of their freedom as a last resort. They must not be unlawfully or arbitrarily detained or subjected to torture and other cruel, inhuman, or degrading treatment.

Despite repeated calls upon Israel to end its harsh treatment towards children and teenagers in military detention, Israeli authorities have persistently failed to end this abuse. Instead they have implemented reforms that are cosmetic, rather than stopping the physical and emotional violence altogether.

As a Jewish community, it is time to speak out against this abuse. It’s time to see these children for who they really are: children. They are not our enemies. They are the victims of a brutal Israeli occupation.

Laurie Zimmerman is the Rabbi of Congregation Shaarei Shamayim in Madison, Wisconsin and the author of Reframing Israel: Teaching Kids to Think Critically About the Israeli-Palestinian Conflict.

About the Author
Rabbi Laurie Zimmerman of Congregation Shaarei Shamayim in Madison, Wisconsin, is the author of "Reframing Israel: Teaching Kids to Think Critically About the Israeli-Palestinian Conflict."
Related Topics
Related Posts
Comments