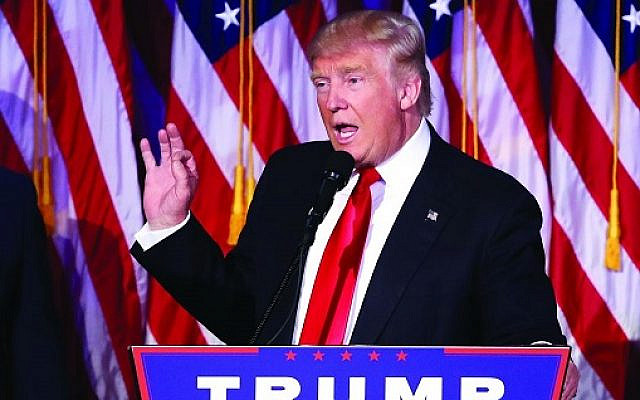 Turn on American television these days and it is possible to get two diametrically opposed views of the world. On CNN, there is the constant drumbeat of impeachment for US President Donald Trump, accompanied by purported evidence of huge secret foreign policy in the Ukraine. It is incidentally the only country, other than Israel, where both the President Volodymyr Zelensky and Prime Minister Oleksiy Honcharuk are of Jewish origin.

Over on Fox News, the Ukraine affair is seen in a different light. All the focus is on Hunter Biden (son of presidential candidate Joe Biden) and his commercial links with Ukraine, now severed, and the hopelessness of the Democratic candidates for the presidency. These sharp differences – not dissimilar in some respects to the UK’s own Brexit wars – are debated across dinner tables everywhere in the US.

On the first day of Succot, I was at lunch in the succah of old friends. One, a committed conservative, acknowledged that Trump was hugely mercurial and nasty, but felt some of his policy achievements were underestimated. These included his tax cuts and his approach to illegal immigration.

His spouse fretted about the quality of the Democrat candidates for the nomination and speculated Trump’s approach would exhibit itself as antisemitism were it not for the fact his daughter Ivanka, son-in-law Jared Kushner and beloved grandchildren were practising Jews. They offered a break on Trump’s baser instincts and partly the reason the president delivered on the longstanding US promise to shift its embassy to Israel.

In much the same way as this family and their guests were divided on partisan lines so, it is also true, that American Jewish families are much more ‘pick and choose’ in their Judaism.

The husband is committed to the Kesher Israel congregation, in the heart of fashionable Georgetown, Washington D.C., which is the ‘home for home’ for Jewish members of Congress. His spouse embraced a more liberal form of modern Orthodoxy in a different part of town. Their daughter, of whom they are immensely proud, is a Reform rabbi – in a Brooklyn community – where the surnames are often more Irish and Anglo than middle European owing to mixed marriages.

The description of the members reminded me of the Life & Styles section of The New York Times. The matches are a sight to behold because of their exotic openness. There is always reference to the success of the bride and groom and often the grandness of the dynasties from which they come.

But it is the mixture that fascinates: gay couples (of both genders) married by named rabbis; Lutherans marrying Jews with rabbinical blessings and strictly-Orthodox weddings side by side. The favourite time, it would seem for New York weddings, is often after Shabbat goes out.

The variety of Jewish observance was underlined by another guest in the succah. This eminent public official had spent Yom Kippur in the car park of Washington’s conservative congregation Adas Israel. This, incidentally, was where my own children went to nursery when I was Washington correspondent. The car park had been turned into an auditorium for nearly 3,000 people with a bimah in the middle and some excellent musicians accompanying the cantor and rabbi.

Doubtless among less free thinking families, much of this variety of practice would be deplored. It certainly would not go down well in parts of Israel or among the more narrow minded north London communities. But America’s traditions of free speech, exemplified by the CNN/Fox News divide, encourages a more liberal approach to Jewish religious practice without rolling eyes and disdain.
Long may the variety live on.