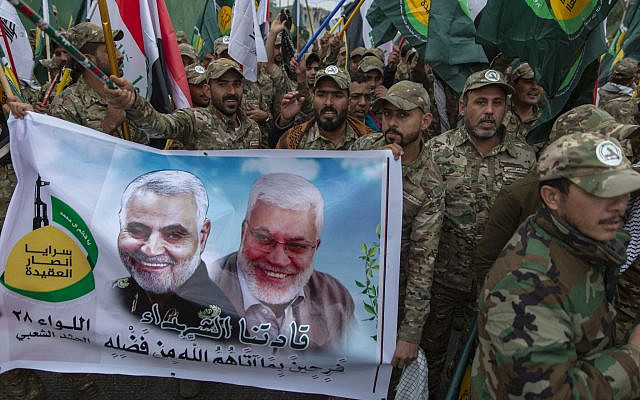 The assassination of Qassem Suleimani may turn out to be the defining foreign policy event of the new decade. It is certainly much bigger than the killing of Osama Bin Laden or Abu Bakr al-Baghdadi in the previous decade. These figures were powerful symbols of decaying terrorist organisations whereas Suleimani was a major player within, as well as a prominent face of, the ‘Iranian state.’

He was quite simply the guiding figure and chief architect of Iran’s bid for regional hegemony. More than anyone else, this shadowy figure helped to cement the infrastructure of terror that now convulses the Middle East and which has allowed Iran to assume dominance in four Middle East capitals (Damascus, Baghdad, Beirut and Sana’a).

Suleimani, who for more than two decades headed the Iranian Revolutionary Guards Force Quds Force, masterminded Iran’s intelligence gathering and covert military operations. The man that The Times dubbed ‘the Machiavelli of the Middle East’ became in effect the chief strategist of its overseas operational activities. But he was also a blood stained tyrant. According to one Iraqi intelligence official, he was the ‘sole authority for Iranian actions in Iraq.’ His Quds Force plotted attacks against US forces in the country, funding and arming the militias that shelled American bases. The weapons that he supplied killed an estimated 600 US troops from 2003 to the present and the attacks he was reportedly planning prior to his death would have killed others.

Without Suleimani’s intervention, President Assad might not have survived the Civil War that engulfed his country. Assad’s survival now means that Iran has created a Shiite crescent of influence which enables it to spread its tentacles of terror across the region. Those tentacles have spread to the Levant given Suleimani’s close ties to Hezbollah, Iran’s most powerful proxy in the Middle East. Suleimani personally aided Hezbollah during the 2006 war and arranged for the transfer of weapons in the years following, helping to make them one of the most formidable armed forces in the region. He sought to create Iranian bases on Israel’s borders from which to launch attacks on the Jewish state and also funded Palestinian Islamic Jihad in Gaza.

All of this enables us to unpick the conventional wisdom about this killing, namely that such a dramatic policy was an unwise ‘act of war’ against Iran. The more accurate assessment is that Suleimani was the architect of decades of asymettric war against the US and its allies. Thus his assassination was a vital means of re-asserting American deterrence, of making a clear statement to the Iranian ayatollahs that Tehran could no longer attack its adversaries with impunity.

This was an act of defensive war against a terrorist mastermind who considered himself untouchable. It was also a powerful reminder of the old adage that to defeat terrorist movements you must first sever the head of the snake. As such, this assassination represents an enormous blow to Iranian power and prestige and a considerable triumph for American (and likely Israeli) intelligence.

But it is also a strategic action with far reaching consequences. Tehran will doubtless retaliate against American interests in Iraq, the Persian Gulf and elsewhere. America should be equal to all these threats and not be cowed by Tehran’s belligerence. Iran, like any bullying, rogue regime, thrives more on the appeasement of its opponents than on their strength. As it is, America has vastly greater firepower and any long term confrontation with the US would only weaken the Islamic Republic.

In any case, Iran is already weakened, thanks both to crippling US sanctions, severe domestic unrest and the growing resentment that Iranian imperial overreach has bred among citizens of neighbouring states. The US should make it abundantly clear that any Iranian escalation will be met with the sternest and most violent response, a posture that will doubtless be matched by Israel if there is any hint of terrorist action by Hezbollah. While this sits uneasily with Trump’s desire to bring troops home, he has little choice but to re-affirm American strength. To send mixed signals now would certainly be fatal.

For now, we should welcome the death of a terrorist mastermind and hope that it strengthens the position of America and its regional allies for many years to come.