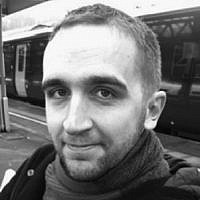 The Blogs
Edward Beaman
Apply for a Blog
Advertisement
Please note that the posts on The Blogs are contributed by third parties. The opinions, facts and any media content in them are presented solely by the authors, and neither The Times of Israel nor its partners assume any responsibility for them. Please contact us in case of abuse. In case of abuse,
Report this post.

The siren sounded tired, as though waking from a long and deep sleep. For a couple of seconds, maybe more, it barely managed to function at all. A few seconds later however and it had found its voice. The rising-falling wail of the local rocket warning siren now seemed louder than it ever had before. Rockets were incoming.

I’d been expecting the siren and the rockets for a few hours, ever since the burning wreckage of Ahmed Jabari’s car had been displayed on my television screen. The Hamas military chief had been cut in half by an Israeli air strike as he was travelling through the streets of Gaza City. Crowds of people swarmed the crumpled mass of metal, waving fists, taking photographs, and picking up bits and pieces of goodness knows what.

As news of the explosion in Gaza continued to filter through, the Ashdod air which had hitherto been fresh, light and warm, began to feel heavy, bloated and burdened. This was a big strike by the Israeli military and going by past strikes of this type, I knew we were in for a pounding.

Maybe it was because I’d been listening out for it, but when the slumbered siren eventually sang, I found myself ambling to the shelter instead of running. This contrasted with previous months when the siren had sounded in the middle of the night and had intermingled with my dreams, briefly forming nightmares. Then, we ran, panicked, dazed and trembling with adrenaline. This time however, there was a sense of calm inevitability.

So there I was, an Englishman in a foreign land, heading to the nearby rocket shelter. I had no religious or ethnic connections to the land of Israel yet for all intents and purposes I was at that moment as Jewish as my next-door neighbour. In the eyes of the terrorists, Jews and those who stood shoulder to shoulder with them, were worthy of the same fate – death.

The Jewish people were once again being targeted, simply for being Jews.

November 14th marked the first of seven days in which rockets would be fired at Ashdod and communities across southern Israel. Jerusalem and Tel Aviv were also targeted, briefly promising a large scale Israeli ground operation into the Gaza Strip. Most days were spent going back and forth to safety rooms and shelters.

Daily activities such as taking a shower, cooking dinner, driving to the shops, or walking the dog, which normally required little second thought, became moments to hurry and finish quickly in case of a siren. It was no way to live.

The explosions of the rockets, either overhead when taken out by the Iron Dome, or in the near distance when crashing into apartment buildings, were loud and frightening. Numerous times I saw terrified children weeping in their mother’s arms as the sirens, sobs and explosions merged into one awful cacophony. You always expected the next explosion to hit your roof and deliver an eardrum-shattering bang, or worse.

Yet despite all this, there was nowhere else I’d rather have been during those seven days of attacks. Ashdod was my home and had been for nearly two years. Israel was my passion. If anything, the attacks drew me even closer to the culture and people I’d come to love. I was never going to be one of them, but for those minutes when the sirens sounded and the rockets fell, I felt Israeli, and I loved it.

As I saw the IAF jets roaring across the skies towards the Gaza Strip, I shook my fist with triumphant encouragement, wishing the pilots success and a safe return. This was war and I had every faith in the Israeli air force to target the terrorists responsible for the rockets heading in our direction.

The Israeli military had become my military and I loved them as much as – and for those 8 days, more than – my own British military. There was no doubt in my mind that I was a civilian on the front lines of the global battle against Islamic terrorism. A fight many of my fellow countrymen don’t even realise needs fighting.

This week I will remember the 8 days of Operation Pillar of Defense. I’ll think of the lives lost and the frightened faces of people in the shelters and safety rooms. I’ll reminisce with anyone who will listen about the feelings of solidarity and the acts of kindness I witnessed from people during the attacks. I’ll also smile about my old next-door neighbour who, whilst in the shelter, was impatient to get back to the football on TV, and his wife who rolled her eyes as he trundled off despite the explosions shaking the walls.

There’s nothing positive to be found in the rocket attacks that emanate from the Gaza Strip. They are deadly and have killed many people. But in some small way they allowed me to experience and feel what I’d always assumed would elude me – the chance to feel like an Israeli, maybe even a Jew – and to feel as one with the culture and nation I’d grown so fond of over the last decade.

And the memories of those fleeting moments are ones that I will always cherish.

About the Author
Edward Beaman is a freelance copywriter and blogger from England. One day, over 10 years ago, he started to read Howard M. Sachar’s ‘A History of Israel: From the Rise of Zionism to Our Time’ and on the last page realised he’d fallen in love with the State of Israel. In 2011 he moved to Ashdod for two years to fulfil a dream.
Related Topics
Related Posts
Comments