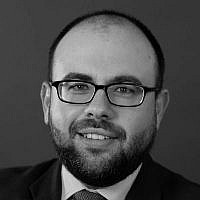 The Blogs
Boris Zilberman
Apply for a Blog
Please note that the posts on The Blogs are contributed by third parties. The opinions, facts and any media content in them are presented solely by the authors, and neither The Times of Israel nor its partners assume any responsibility for them. Please contact us in case of abuse. In case of abuse,
Report this post.

As the United States and countries around the world struggle with getting the COVID-19 pandemic under control, decision points on other issues affecting American national interests continue to approach unabated. Despite the pandemic, the Trump administration and Congress will need to deal with near term national security challenges such as the mid-October conclusion to the international arms embargo on Iran.

The administration has rightfully continued its maximum pressure campaign with a steady stream of designations. So, too, have allies like Germany who recently joined the United Kingdom and the Netherlands as the only European countries to have designated Iranian proxy Hezbollah as a terror organization in its entirety.

These are positive steps. But the US, Europe and countries in the region are preparing for the most dangerous change in the security environment since the JCPOA itself was signed. It is possible and even probable that the fall deadline to extend the arms embargo will come and go.

The likelihood of Iranian partners Russia and China allowing the arms embargo to remain are almost nil. Russia delivered an anti-aircraft weapons system to Iran as recently as 2016, China is banking on Iran as part of its “One Belt, One Road” initiative, and the triumvirate are presently cooperating on efforts to undermine the US through disinformation and state-run propaganda.

Mitigating the risk of arms moving to and from Iran freely and regularly requires US policymakers to mobilize now with greater urgency and action.

Thankfully, there is momentum in the US to take action. Nearly 400 members of Congress signed a bipartisan letter this month urging the extension of the arms embargo and warning “the international community that US sanctions on Iranian arms transfers [will] remain in place and will be fully enforced.” Building upon this sentiment, the administration and Congress should work together to expand existing sanctions in the event the arms embargo is not extended.

The Iran-Iraq Arms Nonproliferation Act and the Iran, North Korea, and Syria Nonproliferation Act may not give Moscow or Beijing pause. Many Russian and Chinese entities in the arms export business have already been designated in the past decade without losing access to foreign markets. To counter this, a legislative framework that would impose real macroeconomic costs for conventional arms proliferation should be expedited.

Congress could find solutions in some of the measures contained within existing laws pertaining to unconventional weapons or elements of legislation such as the Defending American Security from Kremlin Aggression Act (DASKA) to expand our options and signal our intentions to Moscow and Beijing. After all, it is through conventional weapons that Iran has seen the most success projecting its power and creating instability.

We also have to prevent a scenario where Russia and China frontload delivery of an assortment of conventional arms, fearing that the re-imposition of the arms embargo could be just around the corner. While Iran may have trouble paying for a large amount of weaponry, Moscow and Beijing would likely be happy to take IOU’s just to cash in on the spectacle caused by pallets of weapons landing at an Iranian air base.

Should this happen, the key beneficiaries will be Tehran’s proxies across the region who could receive either the newly delivered weaponry or inventory which these shipments replace. If this comes to pass, more suffering across the region will ensue.

If we are to successfully push back against Iran’s influence and roll back proxy groups wreaking havoc across the Middle East, we surely cannot allow Tehran to begin receiving an influx of weapons to strengthen its hand. As the nearly 400 members of Congress signaled, this is an issue that both Democrats and Republicans should rally around.

About the Author
Boris Zilberman is the Director of Public Policy and Strategy at the Christians United for Israel Action Fund.
Related Topics
Related Posts
Comments