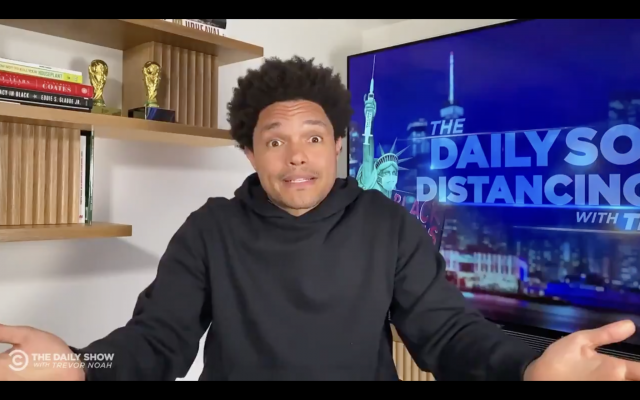 Trevor Noah in a screenshot from the May 11, 2021 episode of the Daily Show.

I just watched your 10-minute monologue on the Israeli-Hamas conflict for your popular television program “The Daily Show” (May 11). Frankly, it wasn’t easy viewing. In fact, I began talking back to the screen, but, obviously, to no avail, so I chose instead to write you this open letter.

You framed your comments quite cleverly by suggesting there were competing narratives out there, depending on who was doing the talking and the starting point of their version of history. And then, as if nothing more than a curious third party, you waded into the debate, essentially assigning yourself a certain moral credibility because of your “non-combatant“ status.

But we are not entirely in a post-truth society yet, at least I hope not, where facts no longer exist and opinions rule the day, especially when catapulted into the public square by celebrity status and legions of admiring followers.

But to fast forward, this conflict, at its heart, is about two competing national movements, and the only logical way to resolve it is by a negotiated settlement – two states for two peoples. Simpler said than done, of course, and here we come to demonstrable facts, not simply personal opinions.

The UN recommended precisely such a two-state settlement as early as 1947. It was accepted by the Jews, rejected by the Arabs. From 1948 to 1967, the West Bank, eastern Jerusalem, and Gaza were all in Arab, not Jewish, hands. A Palestinian state could have been created at any time. It wasn’t.

During 2000-1, Israel, joined by President Bill Clinton, offered a viable two-state accord to the Palestinians (incidentally, one of several offers in the past 20 years). They refused. That’s not my conclusion, but Clinton’s, as described in his autobiography, “My Life.”

Then we come to 2005, which has direct relevance to your monologue. Israel unilaterally withdrew its forces and settlers from Gaza, giving local residents their first chance in history to govern themselves, something Ottoman Turkey and Egypt had never done. By 2007, the Palestinian Authority was violently ousted and Hamas took control. It has wielded power ruthlessly ever since.

What exactly is Hamas, a point you skipped in your take on the Middle East? It is a terrorist organization. That’s not a personal view. It is the formal designation of the United States and the 27-member European Union. What’s the goal of Hamas, again missing from your comments? Israel’s annihilation and replacement by an Islamist regime. Those are frequently expressed and well-documented sentiments of Hamas leaders.

So you skip these relevant facts — the violent nature of Hamas, its doctrinal aims, or, for that matter, its split with the Palestinian Authority — and zero in on the current round of conflict, looking at it, above all, from the perspective of power ratios. You bemoan the imbalance, asserting it’s not a “fair fight” because Israel is the stronger party. You compare casualties, simplistically suggesting the side with the higher number is somehow automatically granted victim status.

You even try to offer a rationale for the Hamas actions by referring to threatened evictions of four Palestinian families in Jerusalem, failing to note that this is a longstanding legal issue in the Israeli court system.

You suggest that Israel triggered Hamas’s ire by harassing Muslims during Ramadan, which is a total misrepresentation of the facts, not to mention that Israel has repeatedly gone to great lengths to protect the right of worship for all faiths – something quite rare in that part of the world.

Let’s be clear: Hamas’s ire for Israel is permanent, as is its goal of one day dominating Palestinian allegiances not only in Gaza, but in eastern Jerusalem and the West Bank, as part of its larger strategy.

And you even try to compare the situation to your own childhood, recalling that your mother told you not to hit your younger siblings, even when provoked, because you were bigger and stronger. Sorry, but your younger siblings were not plotting murder and wreaking societal havoc. You’re ignoring the true nature of Hamas, the fact that it’s been firing 1000s of missiles over the years, building cross-border terror tunnels, kidnapping Israelis, and foregoing development in Gaza to focus on damaging Israel.

You’re downplaying the trauma of millions of Israelis rushing to bomb shelters, caring for the elderly and disabled, and comforting traumatized children, as rockets fly overhead today and could strike anywhere, even with the Iron Dome anti-missile system in place.

You’re laudably concerned about children, but are neglecting the instrumentalization of Palestinian kids at the hands of a cynical Hamas regime that knows images of young victims will change the entire story for those who only see the photos, not the context.

And you sidestep a key question – what is Israel supposed to do under such circumstances when your mother’s advice to you seems totally detached from the sober reality it faces? What would any country do, when the traditional tools of diplomacy – from conflict management to conflict resolution – don’t stand a chance with an ideologically and theologically driven Hamas?

Finally, allow me to stress one point. I don’t view this conflict simply as an endless debate to prove one side right and the other side wrong. Not at all. Rather, my decades-long involvement in the region, my many trips to Israel and the Arab world, including Palestinian territories, has one central dream – peace, enduring peace.

I believe that to be the quest of the vast majority of Israelis, among them my and my wife’s close family members. They have not experienced a single day of true peace since 1948, nor their families who were survivors of the Holocaust, refugees from communism, or victims of evictions from Arab countries.

Israel was not reborn to be in permanent conflict. The fact that six Arab countries now have normalized ties with Israel is a powerful reminder that peace is attainable and that Israel is keenly on the lookout for partners.

One day, that peace will be realized, I pray, with the Palestinians. But it won’t happen as long as Hamas rules Gaza, clings to its genocidal goals, and snookers well-meaning people abroad to believe it’s the victim in a conflict, alas, of its own making.