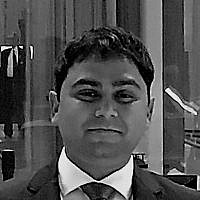 The Blogs
Ameya Pendse
Apply for a Blog
Advertisement
Please note that the posts on The Blogs are contributed by third parties. The opinions, facts and any media content in them are presented solely by the authors, and neither The Times of Israel nor its partners assume any responsibility for them. Please contact us in case of abuse. In case of abuse,
Report this post.

Many agree that the Iranian regime is not representative of its people, and that Iranians are some of the most educated and hospitable people in the world, whose global potential is limited only by its fundamentalist government. The popular uprising in Iran, hence, should not be surprising as the regime prioritizes its spending abroad, in its efforts to destabilize the Middle East, rather than addressing the serious economic woes the Iranian people face on a daily basis. Unsurprisingly, Iran’s President, Hassan Rouhani, blamed the popular protests in Iran on the United States and the “Zionist regime.” Leaders of Islamic Nations (Shia and Sunni alike) have often, to their success, justified their domestic plights and the atrocities associated with their dictatorships, on Israel and Zionism, regardless of how absurd their claims.

Israel’s prime minister, Benjamin Netanyahu, started the year by making a video in which he denied Israeli involvement but still offered his unwavering support for the protesters in Iran. Netanyahu’s support to overthrow the regime that vows Israel’s destruction is definitely understandable, but it should also be compared to Netanyahu’s deafening silence in 2011, when the Egyptian people rose up against their former President, Hosni Mubarak. Unlike the current regime in Iran, Egypt under Mubarak was very friendly to Israel, with strong ties in defense and intelligence. Thus during the famous protests in Tahrir Square, Netanyahu stayed silent, and ordered his cabinet to do the same. Then-US President Barack Obama also took a noticeably long time to call on Mubarak, the pro-American Egyptian leader, to resign. Israel, along with the United States, feared that democracy in Egypt would bring an Islamist government that would be unfriendly to Israel and to the West. Their fears were correct, after the fall of Hosni Mubarak, the Egyptian people elected Mohamed Morsi of the Muslim Brotherhood shortly after in 2012.

Thus the logic in these situations is very simple, Israel will support pro-democratic uprisings in countries that have unfriendly regimes towards the Jewish State, and will stay silent on uprisings against regimes that are friendly to Israel. Israel will understandable support uprisings in Iran, or Assad’s Syria, but would likely stay silent if uprisings occurred in countries like Egypt or Jordan, where there are peace treaties in effect, or in a country like Saudi Arabia, were ties are covertly developing. Israel is not alone in when it comes to applying this logic. Countries around the world support regimes that are friendly to it, at the very least they will not advocate for them to be overthrown, it is in their strategic interest to stay friendly. This is why Western democracies actively support and work with pro-Western dictatorships around the world, and this is why countries in the European Union are staying silent, when it comes to the uprisings in Iran. After the Nuclear Deal, Iran has enjoyed steady and growing relations with the European Union, especially in trade. The European Union supports Iran’s admission to the World Trade Organization and is firmly against retracting the Nuclear Deal that was signed under President Obama in 2015. As the European Union is able to work with this regime, it is not in their interest to see it change, and risk the unknown aftermath after the regime’s fall. This being said, should the protests come to a point where regime change is unstoppable, or should the regime actually fall, the European Union will hypocritically embrace the regime change in the name of democracy.

However, for the United States and Israel, both which are unable to work with the current Iranian regime (with both sides classifying each other as de facto enemies), it is worth the risk when it comes to dealing with the aftermath of the current regime’s fall. In  American and Israeli perspectives while Iran will never be as friendly as it was under the Shah, a revolution in the currently Islamic Republic may lead to a less radical government going forward, if not, it may at least lead to the potential of dialogue and of building a new relationship, even if it is slowly. For Israel, while a friendly Iran is unlikely even under a new regime, a new regime that does not openly call for the annihilation of the Jewish State is also a victory in itself. To put it simply, in the eyes of the United States and Israel, if a regime change occurred in Iran the result could not lead to a more hostile government, than the current one under Ayatollah Khamenei. It worth the risk for the United States and Israel to openly embrace the protestors with the hope that protesters, if successful, remember their support going forward.

Finally, it is also worth noting that Israel should proceed with caution going forward, and that Netanyahu should limit Israel’s involvement in Iran’s domestic conflict. The current Iranian regime, while an enemy of the state of Israel, has benefited the Jewish State in one notable way: it has allowed Israel to start developing covert ties with its Arab neighbors, especially with regional power Saudi Arabia. Using the common saying “an enemy of an enemy is a friend,” Israel has begun working with Sunni ruled countries, covertly, to counter the threat of Iran. Regime change in Iran may hurt Israel in its efforts to normalize relations with its Arab neighbors, especially if the aftermath brings a more moderate regime in Tehran, or one that works on reconciliation with the Arab world. Netanyahu’s vocal support will also undoubtedly be used by current Iranian leaders to show that this uprising is a part of a Zionist and American plot to overthrow the Islamic Republic.

Netanyahu is on the right side of history when it comes to the protests in Iran, but it is only because working with the current regime is unthinkable. While a moderate Tehran is desirable, it may risk the covert ties Israel has begun to develop with various Sunni states. Israel must tread lightly going forward.

About the Author
Ameya Pendse is an Attorney-at-Law licensed to practice in the States of New York, New Jersey and the District of Columbia. He specializes in Franchise Law, U.S. Immigration Law and Real Estate Law. During law school, he has worked with both large and boutique law firms, and has also worked with the U.S. Department of Homeland Security and the Office of the New York State Attorney General. Ameya recently recently received his Master of Laws degree (LL.M.) in Business Law from Tel Aviv University in Tel Aviv, Israel, where he wrote his dissertation on International Franchising, focusing on Comparative Franchise Disclosure Documents (FDD) and requirements. Prior to that, Ameya received his Juris Doctor of Law (J.D.) degree from Seton Hall University School of Law in Newark, New Jersey; his Master of Arts (M.A.) degree in Diplomacy & International Relations from Seton Hall University, in South Orange, New Jersey; and his Bachelor of Arts (B.A.) degree from McGill University, in Montreal, Canada.
Related Topics
Related Posts
Comments