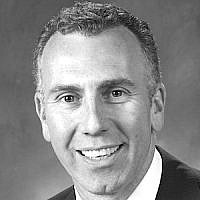 The Blogs
Mitchel Malkus
Apply for a Blog
Advertisement
Please note that the posts on The Blogs are contributed by third parties. The opinions, facts and any media content in them are presented solely by the authors, and neither The Times of Israel nor its partners assume any responsibility for them. Please contact us in case of abuse. In case of abuse,
Report this post.

The nuclear deal with Iran set off a furious debate within the Jewish community with troubling name calling and offensive language. At the same time, political discourse in general seems to reach new lows with each debate and election cycle as candidates, and then elected officials, hurl personal insults and employ hyperbolic and offensive characterizations of their opponents’ positions. The tone set by our political and community leaders creates a hostile and problematic environment for the future of democratic countries and the climate within the Jewish community. The language used by our leaders in their debates is particularly troubling to educators like myself who value and encourage an open, spirited, but respectful exchange of ideas between students in our classrooms and schools.

The discourse is corrosive for our ability to address serious issues and the example these leaders set threatens the future by normalizing this discourse for the next generation.  Classrooms and schools are a unique locus of public conversation where the qualities most necessary for democratic discourse may be cultivated and supported.

Educators are positioned to provide a counterweight to the poor example our political leaders are exhibiting. Classrooms are a place where students learn the skills to be effective and engaged participants in our democratic societies. Although speaking in a classroom or school environment is not the same as speaking in the outside world, schools have a special opportunity to provide a forum where students can exchange ideas, share opinions, and receive feedback on their ideas without fear or intimidation. Today’s students are the future leaders of our civil society.

The idea of civil society originates with Cicero and the concept of the societas civilus. Cicero held that there are standards of conduct towards others and that members of a civil society should comport themselves in a way that seeks the good of the city. Civility in this conception was explicitly political and not based on the concept of politeness. Speech was weighed through the lens of how it did or did not contribute to the welfare of the city. Civil discourse is, therefore, discourse that supports, rather than undermines, the societal good.

Hillel and Shammai were two leading rabbinic sages who lived at roughly the same time as Cicero. They founded opposing schools of Jewish thought, and the Talmud records over 300 differences of opinion between the two. The Talmud also recounts that despite their many disagreements a heavenly voice once announced, “These and those are both the words of the living God, but the law agrees with Hillel.”

The ancient rabbis conveyed a profound idea that God’s word can be legitimately interpreted in different ways. They contended that God stands behind different—and conflicting—opinions which both authentically represent the word of God. There can be conflicting ideas which are both “right” and contrary opinions can be given equal validity.

The rabbis did not want us to simply compromise our truths for the sake of peace. They actually contended that multiple truths are equally valid. This approach lends more integrity to one’s opponent than saying, “I will tolerate you for the sake of being polite.”

The Talmudic story ends by asking what entitled Hillel to have the law agree with them when both opinions were equally valid. The answer: Hillel was kind and modest, they studied their own rulings and those of Shammai as well, and when they argued, they mentioned the rulings of Shammai before stating their own opinion.

During an event at Oberlin College, National Public Radio journalist Diane Rehm once defined civil discourse as our ability to have conversation around topics about which we disagree and our ability to listen to each other’s perspectives. The ancient wisdom of the Talmud would advise us to respect our adversaries, study our opponents’ arguments, and engage them in debate.

With deeply divided electorates and Jewish communities in Israel, the United States, and other democratic countires, and leaders who have forsaken the wisdom of Cicero and the Talmud, schools must work to be sites of social transformation in which teachers create environments where young people communicate effectively, even in disagreement. We have the opportunity to improve civil discourse as a tool of democracy. If not now, in the next generation of leaders and engaged citizens.