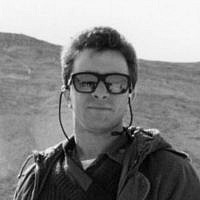 The Blogs
Ben Simon
Apply for a Blog
Please note that the posts on The Blogs are contributed by third parties. The opinions, facts and any media content in them are presented solely by the authors, and neither The Times of Israel nor its partners assume any responsibility for them. Please contact us in case of abuse. In case of abuse,
Report this post.

For those of you who live in Israel, you may not know the late Paul Harvey of blessed memory.  I grew up with Mr. Harvey, every summer during Scout camp in Maryland where we listened on the local radio station three times a day. “Stand by for NEWS!”, he’d say, and we couldn’t wait to hear the stories he’d tell. And it wasn’t always the news you’d hear on the major news networks, many times they were personal stories or small-town paper stuff. Didn’t matter – this man knew how to tell it, and his distinct voice will forever be in my ears.

Mr. Harvey was, for all intents and purposes, what I’d call a mid-west conservative, a bit to the far right some would say, definitely by definition a Republican, although I never asked to see his voter registration card. No question, Mr. Harvey was very much a promoter of ‘family values’ and went to church regularly, but did you know that he supposedly coined the terms ‘Reaganomics’, ‘skyjack’, and ‘guesstimate’?  No, me neither, until I researched for this blog article. And yes, I am aware that he befriended the likes of Mitt Romney and Billy Graham, as I’m sure some of you who do remember him may remind me.

You may ask why this week I bring up the subject of a once famous radio broadcaster from the USA in a blog on the Times of Israel? What relevance could there be to what’s going on in the world, or the ‘Middle East conflict’ (as he might call it)?

I agree – it’s odd that I would think about writing my first ever blog post on TOI and recount a story of my youth about a man that probably never visited Israel.  In fact, I don’t know if he did or didn’t, but I would think he would have wanted to.  Perhaps one of you out there knows for sure.

So why now?  When you get a chance, I’d like you to do a little internet homework and search on his Landon lecture from 2003.  There you will find an interesting remark in his speech where he repeats a particular phrase: “Self-government won’t work without self-discipline”, he says.  I find that very relevant to what’s going on both in the US and Israel on both the political and public arenas today.

BREAKING NEWS! In the last few days here it’s being reported that during the presidency of Sir Donald it seems that the DOJ (Department of Justice) was (pick your poison) coerced, cajoled, instructed, advised (can we say ‘directed’?) to investigate our legislative branch of government and the media as part of a so-called “Leak Hunt”. You’ve likely heard about this already, so I won’t dive into the ugly details, but the ‘aggressiveness’ in the tactics used by the DOJ under apparently the ask of the White House (perhaps the Donald himself, it remains to be seen) went so far and so bold as to ask our friends at Apple to give up metadata and records of elected members of Congress and their family members, and they went digging for information on media personalities as well. (None from the Fox Network that I know of anyway)

There are rules – written policies governing White House contacts with agencies and offices within the executive branch that have investigatory and enforcement responsibilities.  The public has a particular right I should think in a democracy to expect that their elected officials, including and particularly their President (or Prime Minister), exercise quite a bit of this thing called ‘self-discipline’ and set an example to not just those of us here in the good ‘ole USA (or Israel), but as an example to the world how democracy is supposed to work.

This newest controversy at the DOJ is only of course the latest in what seems to be the never-ending saga of MAGA which came to a culmination on that day in January in our nation’s capital.  We saw fantastic shining examples of non-compliance to ‘self-discipline’ from many of our Republican senators and congresspersons who – at least when I was in grade school – are supposed to set examples to the rest of us of what it means to live in a ‘democratic’ society and be good citizens.  Unfortunately, I see it on the far left in the Democratic party as well. My friends, we know how that is turning out.  And it ain’t pretty.  And I’m stuck in the middle wondering what’s next.

And then…. there’s what’s going down on your side of the pond.  In my beloved Israel, where we have seen investigations of the Prime Minister for some time over corruption charges.  Even worse, we have seen an environment of rage and threats against members of the Knesset.  Hear, O Israel! Are you going to have your own January 6th as well?

When Mr. Harvey talks about ‘self-discipline’ in his speech, he is NOT talking about just our elected officials but he is addressing the public also.  What I am reading and seeing on the Israeli news makes me wish I could be there now and tell you all to STOP!  This is not practicing self-control, self-discipline, and certainly not the big happy family I knew when I was among you living the dream even during the intifada.  What happened to the “light of the nations”?  My beloved Ben Gurion is turning over in his resting place in Sde Boker, and it’s not because of the desert heat.

Let me repeat myself, because it needs to be heard again and again:

NO, it’s not easy.  YES, it takes the better human being to do it.

But isn’t democracy worth that much?  And lest we speak of Jewish values – does the Torah teach intolerance, lies, and deceit?  No, it does not.  Rather, it perhaps provides vivid examples of what happens when you do those things. Does it teach us to rise up against our leaders in times of crisis? Or to rise up against each other?  Survey said “NO”. We can also examine Yom Kippur as an example of discipline and control from a Jewish perspective should we choose to pick a reflective moment from our religious calendar of events.

Even Mr. Harvey, as conservative as he may have been, would respect and understand, and I’m sure even broadcast these words on his very own program, that without discipline we are destined to suffer the consequences of our self-destructive behaviors.  Or as they say, history repeats itself – yet again.

In fact, you should search for another interesting clip from Mr. Harvey entitled “If I were the Devil”.  Written and broadcast back in the 1960’s (I think he rebroadcast and updated it as late as the 1990’s), the message – and his ‘premonition’ – is startling and relevant to what we are seeing in our world today.  Perhaps more so in the US than ever before.

Let’s not allow the ‘fringes’ to drag the majority down into the mud.  I truly want to believe that most of us humans are ‘not bad’, in fact I’d like to think the opposite – glass half full, right?  While we can ‘respect’ differing points of view, I fear we cannot allow the far left or right to become the mainstream.  Let us not forget that we live in a democratic society and that while fragile it may be, it is worth preserving.

I could continue my story and tell you how I feel about having a square in Petach Tikvah named after a narcissistic and delusional ex-President, or wonder why there are more deaths by traffic accident in Israel than the number of those killed by Hamas rockets (man I really don’t get this statistic but I too have driven in Israel and seen this first hand), or wonder how we fix a clearly broken public image problem in Israel, or solve anti-Semitism overnight, but I cannot.

Right now, my heart is hurting, and my head is spinning, and this blog may well be my only release.  At least I hope in writing this I can make an impact, my own take on tikkun olam.

About the Author
Ben is a third-generation Jewish American... or is it 4th? His great-grandparents came with their parents to the USA sometime back at the turn of the century (20th, not that last one). They came from places like Belarus and Romania and Italy (so his Dad says). None were ever in Israel, that he knows of. He spent a few of his 'good' years in Tel Aviv, Jerusalem, Ramat Gan, and Arad. He has climbed Masada 22 times (he lost track actually). He's a funny guy (so they say), and wanted to be an Israeli Tour Guide (is it too late?). He works in IT, but it's really not his 'thing'.
Related Topics
Related Posts
Comments
Advertisement