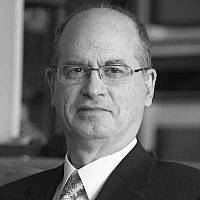 The Blogs
Timothy L. Jackson
Apply for a Blog
Advertisement
Please note that the posts on The Blogs are contributed by third parties. The opinions, facts and any media content in them are presented solely by the authors, and neither The Times of Israel nor its partners assume any responsibility for them. Please contact us in case of abuse. In case of abuse,
Report this post.

Hunter College, City University of New York (CUNY) professor Philip Ewell, who identifies as black, shocked the music theory world at the Society for Music Theory (SMT) Conference in 2019 when he indicted Heinrich Schenker (1868-1935), an Austrian Jew, as a “virulent racist” and accused generations of Schenker scholars of trying to “whitewash” the theorist’s racism. In March 2020, scholars rebutted Ewell’s claims in a Symposium in the Journal of Schenkerian Studies, supervised by this writer at the University of North Texas. A social media storm immediately erupted on Facebook and Twitter, in which Ewell himself participated. The  SMT posted a blog attacking Ewell’s critics as anti-black racists. Demands circulated for my firing, closure of the Center for Schenkerian Studies at my university, and termination of the journal. The Executive Board of the SMT immediately promoted a resolution censuring me for my alleged “racism.” Almost one thousand scholars, including musicologists and theorists, signed on.

In the Symposium, several scholars acknowledged that Schenker harshly castigated those nations allied against Germany and Austria in World War I, and denigrated Slavic nations specifically for their pogroms and persecution of the Jews. I pointed out that in the last phase of his life, however, with Nazism ascendant, Schenker came to believe that it was his mission to save German music for everyone, even from the Nazified Germans themselves – without distinction of race, religion, or national origin.

Ewell, by contrast, engaged in dishonest “scholarship” in service of the charge that Schenker (and his disciples) are “racists” – and that Schenker’s musical theories are permeated with racist tropes. His ignorance of historical context undergirds his false assertions and his egregious edits and omissions allow him to invert Schenker’s meaning — all in service to the overriding Critical Race Theory (CRT). In his article “Music Theory and the White Racial Frame” published later in 2020, for example, Ewell omits the key sentence from his quotation of Austrian historian Martin Eybl, which would have overturned his thesis. The sentence that Ewell replaced with ellipsis is: “Again, Schenker does not argue on the basis of race, but of German national [culture].” Indeed, Eybl wrote to me on January 23, 2022, “As I have clearly stated in my book, Schenker was not a racist in the sense of the National Socialists. Ewell distorts the meaning by omitting parts of the text when he is quoting me.” Ironically, the SMT’s own “Policy on Ethics” condemns precisely this kind of dishonest manipulation of quotes. The SMT explicitly states: “Relevant supporting evidence should be presented … free of misrepresentation and distortion; evidence that contravenes one’s operating hypothesis should not be suppressed” [my emphasis].

Ewell and his followers at CUNY and other universities and colleges are promoting a historically false, defamatory narrative about Schenker with clear anti-Semitic overtones. One of the most appalling, and pernicious claims, which appears in an article posted by CUNY, “A Black Professor Pulls Back the Curtain on Racism in Music Theory,” by Beth Harpaz—is that Schenker, a Jew living in Austria in the early 20th century, “supported the white supremacist and German nationalist movements that presaged Hitler.” In fact, Schenker had unequivocally condemned Nazism in April 1933 (only two and a half months after Hitler became chancellor, which was, in fact, much earlier than many other luminaries had denounced him) and encouraged his non-Jewish close friend Reinhard Oppel to dissociate himself from the Nazis. Schenker never supported nor endorsed any proto-Nazi movements. Such claims, based on academic fraud and misrepresentation, stain CUNY’s reputation as a serious research university and must be retracted.

Repeated mistranslations, misinterpretations, and de-contextualization have transformed Schenker into a Jewish anti-Semitic Nazi, and from there, into a “white supremacist.” To characterize Schenker as a self-hating Jew is libelous. Nevertheless, an article by Georg Burgstaller (2018) claims that “A few months later he [Schenker] confided to his diary some of his most striking anti-Semitic thoughts [my emphasis]; in response to a postcard from [really a letter his friend, the Jewish pianist Moritz] Violin sent in the summer of 1923, for example, he notes: ‘[Violin] admits in the face of the Jewish activities that he is a Jewish enemy of the Jews; correctly notes: the Jews top the list as Germany’s enemies.’ ” My translation of the conclusion of Violin’s letter to Schenker, to which this diary note refers:

You do not believe what a magnificent core the mass of the [German] people represents. Only just now is it being led to perdition by our “leaders.”

The people’s hatred of France, England, etc. is enormous. The shabby, intellectual “self-righteous,” the “objective ones” condemn the hatred to the rest [of the world]. I almost consider the matter to be “Jewish.” Among those who want to stand by [i.e., defend] Germany you will not find any Jews. Among the “orators” who stand “above the matter” – we Jews.

Here, Violin, himself a Jew, is apologizing for criticizing German Jews for their public self-flagellation. An accurate translation of Schenker’s note would read: “Violin [apologetically], in view of the activities of the Jews, considers himself to be like [“as if he were a”] Jewish enemy of Jews; correctly remarks: as Germany’s enemies, the Jews are on top.” The “apologetically” I have inserted, while not in Schenker’s diary note, references Violin’s “Verzeihe dem jüdischen Judenfeind” [“Forgive (or excuse) the Jewish enemy of the Jews”], the closing in Violin’s letter to which Schenker is referring. It is important to point out that, in criticizing his Jewish brethren, Violin apologizes for feeling like [or “as if he were a”] Jewish enemy of Jews. Violin never says that he is one, and neither does Schenker.

The great theorist’s repeated statements concerning the strength of his Jewish faith and pride in the Jewish people as a whole preclude labeling him a self-hating, anti-Semitic Jew. Consider this characteristic diary entry from December 1, 1925:

Clarification of facts: to Lie-Liechen [Schenker’s wife, Jeanette Schenker], concerning some Jewish matters, especially concerning the well-instilled love towards the home brought about by millennia of hardship, in short concerning the sense of family, the care of the family that one still finds among Jews and, occasionally, also among other peoples. By this means [i.e., the care of the family] only, the preservation of the Jews as a nation has been successful; as a premise for progress, also in spiritual [or intellectual] realms, a country of their own would, of course, be required. In the absence of such, the Jew, in order to be able to have an intellectual impact, must adopt a home and function in a culture of his choosing….. There are no grounds for someone to demean oneself for being a Jew, so long as the score between [the Jews and] the peoples of the West and East is not properly settled. It is a sign of an inferior power of judgment, or of an inferior knowledge of the relevant facts, if one judges otherwise.

These are hardly the words of a self-hating anti-Semitic Jew.

About the Author
Timothy L. Jackson’s primary interests center on the music of the eighteenth through twentieth centuries, Schenkerian theory, and politics and music. He has published on a wide range of topics, especially on theories of form and large-scale tonal structure, in an array of journals including The Journal of Music Theory, Music Analysis, In Theory Only, Theory and Practice, The Journal of Schenkerian Studies, 19th-century Music, The Musical Quarterly, Music and Letters, The Journal of Musicological Research, and The International Journal of Musicology, and also in books published by Rochester, Cambridge, Oxford, Duke, Princeton University Presses, and Ashgate Press. He teaches courses on music theory and the politics of classical music, and actively directs the "Lost Composers and Theorists" Project, which seeks to revive the music of composers whose work was eclipsed or lost as a result of the Nazi-era cultural policies and the Holocaust. He has been a Fulbright Professor to German and Korea, and received awards from Germany, Austria, Canada, and Finland to support his academic research.
Related Topics
Related Posts
Comments