The Blogs
Yakir Englander
Apply for a Blog
Advertisement
Please note that the posts on The Blogs are contributed by third parties. The opinions, facts and any media content in them are presented solely by the authors, and neither The Times of Israel nor its partners assume any responsibility for them. Please contact us in case of abuse. In case of abuse,
Report this post. 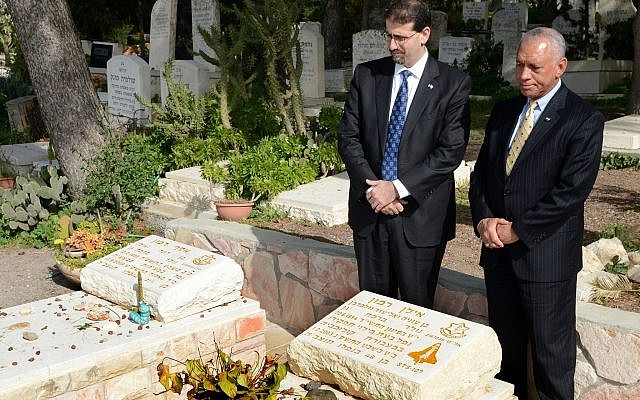 It is time to share these thoughts that I have held in my heart for nine long years.

A week ago, Rona Ramon passed away after a struggle with cancer. Although we never met, Rona held a unique place in my heart; I knew her in a way that no one else could have known a mother.

Rona lost her husband, Ilan, the first Israeli astronaut, in the 2003 disaster of the Columbia space shuttle. But my own connection with Rona’s story came about six years later, in 2009.  It was a few days before Rosh Hashana, when around 10:00 p.m., I heard on the news that an Israeli military plane had crashed. I felt my heart skip a beat, since I serve in an IDF unit that is charged with identifying the remains of combat victims. When my phone rang, I knew who was calling even before I recognized the IDF caller-number. I was needed.

An hour later, I was issued my uniform and my orders, and joined my unit. To identify the bodies of the dead is a job that no one should ever have to do, in or out of the army; the soldiers I was assigned to work with were being given an unspeakable burden. Looking around me, I saw a unique group of humans who share one thing: all of us were living “outside the camp” – like the lepers we read about in Scripture. There were ultra-Orthodox who had volunteered for a few months; some settlers who live as if we are writing a new chapter of the Bible; a few ex-Hasidim, like me, trying (and mostly failing) to understand how to be an Israeli, outside the secure walls of the ultra-Orthodox world; some looking like secular Israelis, although their bodies still moved like yeshiva students. Clearly, not a single one of these men would have chosen this dark service; it was as if the military system had used our broken hearts to convince us to fulfill this holy and horrible role.

The young Israeli Air Force pilot who had crashed his jet that night was Ilan and Rona Ramon’s son, Asaf. We were the first to arrive in the area, just at sunrise. Our officers stood next to the plane wreckage, awaiting orders. The professionals were debating whether we could touch the remains of the war machine, searching for Asaf’s body, or if explosive ordinance put us at risk. After what seemed an eternity of waiting, some of us began our search. We decided not to wait a moment longer, knowing that our feelings would begin to leak from the isolated inner box of our hearts, and knowing that no one can do this holy-horrible work encumbered with feelings.

Jewish law and tradition require that the dead be entrusted to the earth before sunset: we had less than 12 hours to find Asaf and bring him to his grieving family.

We began our search, and for hours it was fruitless. By noon, we were all very anxious; we just could not find any trace of Asaf. The army had brought in help: a hundred new recruits, all in their first months of service. These were youngsters, just out of high school.

One of us — maybe it was me — finally had the idea. We began to look in a new way. Even all these years later, I cannot bring myself to describe the method, it is so disturbing. I will say that it required us to crawl like babies, our faces inches from the ground — and it worked. As we began to discover infinitesimal fragments of Asaf’s body, the young recruits started crying. It was clear that their emotions were deeply shaken, and I have no doubt that they will carry this trauma for the rest of their lives. I gathered them around, and we talked. I shared with them the personal reasons that I serve in this unit. I offered them the option to leave, and asked for volunteers to continue. Almost all of them stayed.

I was there, at 4 p.m., when we gathered together and handed over to the officers the remains of Asaf that they would give to Rona and her family. Before passing on the tiny fragments of flesh I had found, I hugged them to myself, as I always do.

I call my unit “The Cleaners;” this is not the official army designation, of course. We always leave the area clean. On a deeper level, we pick up and carry the dirtiness of war inside our souls and bodies. For me, it always is important to embrace the bodies that we find. What the family receives from the army is a closed coffin: they have no idea what there is — or is not — inside. But I know. To embrace those broken human fragments is my way of taking a certain responsibility for their death. My way of promising to create a more healthy society, and to carry them with me in my prayers.

Rona, I never met you, but I know you. I remember standing at the station in my crumpled uniform, waiting for the military bus that would take me home. I left behind me, on that rocky ground, fragments of Asaf that we could not find, bound by an umbilical cord to pieces of my heart and of my sanity, shards that will never come back to me. Just like you.

Before we left the scene, a soldier in a clean uniform had told us that you, Rona, had invited all of us to Asaf’s funeral. I gently declined the invitation. I did this for the same reason that I never asked to meet with you, something I very much wanted to do. I stayed away. Simply, I was afraid that you would ask me, “What was in the casket that you sent me?” This is also the reason I have not shared this story until now. Now, perhaps, you already know everything.

I learned, Rona, that it was your final wish, that your body be cremated, not buried in the ground. The rabbis of Israel sent your family a letter, asking that they disregard your will, since it contradicted Jewish law. Media reports surmised that you wanted to be cremated, knowing that no rabbi would agree to bless the decision, so sparing your family yet another funeral. Maybe. Or, I think, perhaps you just wanted your body to burn, like the body of your husband, and like the body of your son: “And fire went forth from before the Lord and consumed them…” (Leviticus 10:2).

I never met you, Rona. But I care about you, and will be praying for you and your son until my last day on earth. I never washed my uniform after I searched for him; I have it in a bag, safely kept, and I want it to be buried with me when I will find one day peace in the rocky ground.

That day, I entrusted those officers to pass on to you, not only Asaf’s remains, but also my promise, that I will do anything I can to heal humanity. Twenty-four hours later, I was on a flight to Holland, There, I had been invited to lead a Jewish community in the Rosh Ha-Shana service, with its ancient reflective prayers for a sweet and good New Year.

Never before or since have I prayed so deeply those words from the holy service: “…and who by fire.”

About the Author
Dr. Yakir Englander is working to create Jewish and Israeli leadership in the US at the IAC. Originally from the ultra-Orthodox community of Israel, the Viznitz Hasidic dynasty, Englander earned a Ph.D. from the Hebrew University in Jerusalem in Jewish philosophy and gender studies. He is a Fulbright scholar and was a visiting professor of Religion at Northwestern and Rutgers universities and Harvard Divinity School. In addition, he was a Shalom Hartman scholar in Jerusalem. Englander served as the Jerusalem director of Kids4Peace and later as the vice president of the organization. All of my blogs were translated by Dr. Henry R. Carse
Related Topics
Related Posts
Comments