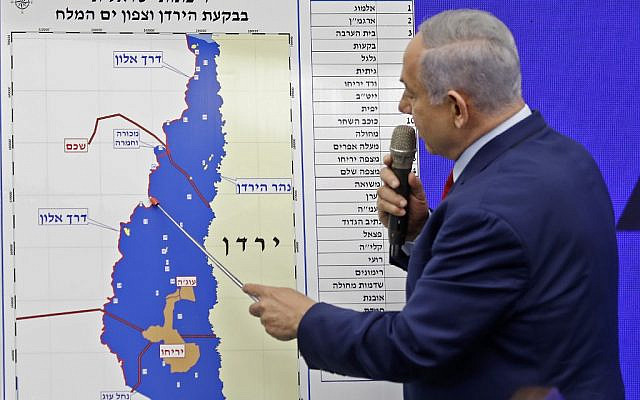 Prime Minister Benjamin Netanyahu points at a map of the Jordan Valley as he gives a statement in Ramat Gan, September 10, 2019. (Menahem KAHANA / AFP)

Prime Minister Netanyahu has mentioned, on a number of occasions, his intention to move ahead with the annexation of the Jordan valley to Israel. Were he to implement such a plan, the Jordan Valley would have a similar status to that of the Golan Heights and East Jerusalem, both of which have been annexed by Israel in the past. While the international community would not accept such annexation, it would, as far as Netanyahu is concerned, accord different legal status to the area and enable the operation of full Israeli civilian law, unlike the remainder of the West Bank where all operations are carried out with the final approval of the military administration – even those which deal directly with mundane civilian issues, such as education, municipal governance, planning, health and welfare and the so on.

Netanyahu obviously sees the annexation of the Jordan valley as an election winner, as he seeks to gain those few extra points which will enable him to increase the number of people who will vote directly for the Likud, rather than for the many right wing splinter parties, and thus have a slightly better chance of putting a coalition government together after the third bout of elections.

So far, he has only made the declaration but has not gone as far as implementation. Given recent events, he is probably fairly confident that the friendly USA Administration will not condemn Israel, even if it does not go as far as recognizing the annexation. Netanyahu will argue that this is necessary for Israel’s long term security, especially in an era where regional and global terrorism is on the increase, and that Israel must take full control of all of its borders – present and future – if it is to maintain security and prevent any infiltration from the east into the West Bank, and from there into Israel.

The Jordan valley has always been perceived differently to the rest of the West Bank. For the first ten years after the Six Day War, the government of the time operated according to the Allon Plan (named after Yigal Allon) which focused on the retention of the Jordan Valley as Israel’s defensible border to the east, while at the same time being prepared to return the remainder of the West Bank as an autonomous region (linked to Jordan through a territorial corridor running from Ramallah through Jericho and to the Allenby Bridge) under Jordanian control. This is the main reason why the Labour government of the time attempted to create a settlement network of kibbutzim and moshavim along the Valley while, at the same time, strongly opposing any form of settlement establishment in other parts of the West Bank. It was only with the rise to power of the first Likud government under Menachem Begin 1977 (the only real revolution which has ever taken place in Israel’s politics), and the formation of Gush Emunim following the Yom Kippur War, that settlement strategies changed, forming the basis of what is today a settlement network of some half a million Jewish residents throughout the region.

The notion of the Jordan Valley as Israel’s future boundary was expressed in a famous article written by (or for) Allon and published in the prestigious journal, Foreign Affairs, in 1976, entitled “The Case for Defensible Boundaries”. Allon argued that it was essential that Israel maintain full and direct control over this border with Jordan in any future peace arrangement, thus ensuring the long term security of the country.

But not only have settlement realities greatly changed during the subsequent fifty years, so too have the functions of borders, not least the Jordan Valley. The growth of ballistic missiles, be they close range from the Gaza Strip or South Lebanon, or be they long range from Baghdad or Teheran, take no notice of the location or height of the physical borders. Security is threatened due to regional threats, not because the border is located at any particular point. The peace agreement between Israel and Jordan (even though Jordan refused to sign on that part of the map where their common border with Israel runs parallel to the West Bank, arguing that this was for a future Palestinian State to decide) also has clear stipulations concerning the nature of military activity which can take place close to the border. Jordan is not keen to introduce new instabilities into the region and closely monitors the cross-border activities which take place, attempting to distance any form of militant Palestinian or other regional forces from coming anywhere near the area. This is not out of any love for Israel, but due to the regime’s own internal fears of civil war and of being deposed by more fundamentalist elements. That does not mean that no infiltration ever takes place, but it is kept to the minimum, if only because of the internal threats which could face the Jordanian regime in the face of increased instability.

There was a period during the past two decades when a number of Israeli leaders, including former military commanders, argued that the Jordan Valley was no longer a major strategic imperative because of the many changes which had taken place in the region. While this is open to debate, Netanyahu clearly rejects this opinion. He has returned the Jordan Valley to its former position within Israeli strategic thinking, as a key part of the bordering enforcement policy which has taken place along all of Israel’s borders in recent years. This includes the sophisticated fencing and surveillance of the border with Egypt and parts of the southern border with Jordan where, for the past two to three decades, there had been little more than flimsy fences and, in some points, no physical barrier whatsoever.

It also includes the transformation of much of the Separation Barrier between Israel and the West Bank from electrified fence to additional walls, as a means of preventing movement across the border at anywhere but the five official crossing points. Nowhere is this more apparent than in the south western sections of the Green Line where, during the past five years, a concrete wall has replaced the fence which had previously been erected less than a decade ago and which had previously included holes in the fence which provided “breathing spaces” for a small number of people crossing the border without the necessary licences and documents.

The famous Robert Frost poem on borders contains the well known sentence that “Good Fences make Good Neighbours”. But the truth is that if Israel had good neighbourly relations with the Jodanians, the Egyptians and the Palestinians, we wouldn’t need fences or walls in the first place. The reality is that we have anything but good neighbourly relations, even with those with whom we have signed a peace agreement. In order to ensure correct, rather than good, neighbours, Israel has decided to build walls and fences along its entire length of borders – and the Jordan Valley is one of the final pieces in the jigsaw.

Ironic to think that so many Jewish immigrants came to Israel and pre-State Palestine in order to escape the physical ghettos of Europe, but that we have now succeeded, through the continuous building of walls and secure fences, a country which is entirely fenced in as a national ghetto – the largest in history and totally self imposed.

Whether the Jordan Valley, a region which has failed to attract any significant settler community, unlike the rest of the West Bank which is in closer commuting distance to the main cities, provides additional security for Israel, and whether such security requires the annexation of the entire region, is open to question. Opinion will be divided inside Israel especially when the rest of the world condemn such a move and use it as yet another reason for criticism of Israel in international fora.

Whether the annexation of the region be no more than an election gimmick on the part of the Prime Minister in an attempt to shift votes from the smaller right wing factions to his own Likud Party, remains to be seen, but as it is unlikely to occur before the forthcoming elections, the impact of his statement is likely to be minimal.

The Jordan Valley, with its small population and inhospitable climate, has become one of those recurring political footballs to be brought out as and when politicians see it as useful for other political objectives. It requires much deeper strategic thinking as to whether the region is necessary for Israel’s long term security needs, and/or whether such a move will make it even more difficult to reach a future agreement with the Palestinians – for whom the Valley region makes up almost fifteen percent of the entire West Bank, and is one of the few areas with available space for future development. Not that any form of agreement, with or without the Jordan Valley, is anywhere close to being discussed at this point, but why make an almost impossible situation even more impossible, if the ultimate purpose is just to gain some additional votes?

Over half a century has passed since Israel conquered the West Bank, including the Valley. Even when this region constituted a major part of Israel’s defence and strategic policy as part of the Allon Plan, the Israeli government did not annex it. Leaving aside short term electoral reasons, it would be best to leave well alone for now.