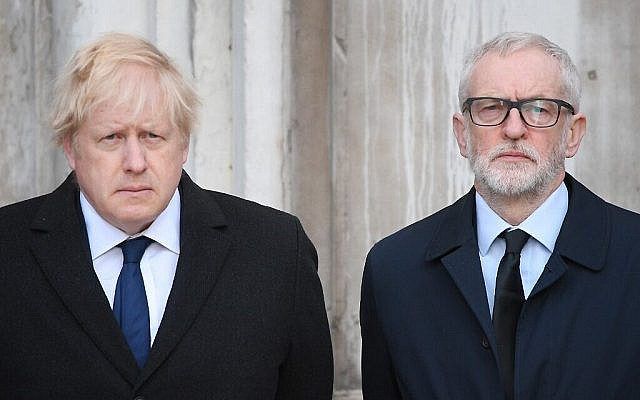 Britain's Prime Minister Boris Johnson (L) and opposition Labour party leader Jeremy Corbyn take part in a vigil at the Guildhall in central London to pay tribute to the victims of the London Bridge terror attack on December 2, 2019. (Daniel Leal-Olivas/AFP)

Britain’s election this week is a classic least-bad option situation, which tends to scramble minds. Ahead of Thursday’s election many people seem unable to focus on the main issue of Brexit and are repelled by the Labour Party because of its supposedly institutional anti-Semitism. We risk provincialism, and a cheapening of the term.

Here is what anti-Semitism is: My mother, who died earlier this year, spent her sixth birthday evading Nazis and Romanian nationalists in what is remembered as the Iasi Pogrom. Over 13,000 Jews were murdered in the span of a week in 1941, but her family survived in ways too horrifying to outline here. Anti-Semitism is deadly bigotry against Jews that has roots in conspiracy theories about how they cleverly scheme to control the world.

And here is what anti-Semitism is not: opposing the actions of the gang currently in power in Israel, especially their handling of the Palestinians in the West Bank. There is plenty of opposition in Israel itself to those actions, from the vast majority of those who are aware of the facts and from almost everyone in the top echelons of the security establishment. They’re probably not anti-Semitic Jews.

Anti-Semitism is also not the labelling of goods from West Bank settlements. I understand if people want to know they’re doing business with those communities, which are considered also by many Israelis to be a moral stain and a calamity (since they make partition, which Israel needs to save itself demographically, increasingly difficult). It is also OK to avoid the fruit of child labor or blood diamonds, and for years my mother did not want to visit Germany. Israel now tries to ban boycotts; but hypocrisy, even cloaked in victimhood, is not a good look.

In fomenting hysteria about the global opposition to Jewish settlements in the West Bank, and in crying anti-Semitism over legitimate debate, the Zionist and Israeli right makes a mockery of real anti-Semitism and discredits those who warn of real danger. . It cheapens the memory of the oppression my parents overcame and other millions did not.

So what is actually the case here? I’ve seen anti-Semitism in Britain, where I lived for years. It originates mostly from Muslim minorities with their issues, and from Etonian highbrows who tend to congregate in the Conservative Party (anyone puzzled by this should watch to the end of this scene from Chariots of Fire). On the hard left of the Labour Party there is strong opposition to the West Bank occupation that sometimes extends to actual rejection of Israel’s right to exist as a Jewish state. That  shows naivete about the injustices and violence that underpinned the creation of most nations, from the United States to Pakistan to even Italy, Spain and France. That is ignorance posing as idealism, and it may appeal to anti-Semites, but it is not in itself anti-Semitism.

That is not to suggest there is no problem in the UK or the Labour Party.

There has been a rise in anti-Semitic incidents in the UK, at least in part probably related to all the discussion. Similar trends are seen worldwide and Israel’s internationally reviled government bears partial responsibility. But Pew’s 2015 study also found that the United Kingdom is among the least anti-Semitic places, and just two years ago the Institute for Jewish Policy Research found that the level of anti-Semitism in the UK was among the lowest in the world, with around 2% holding such views while about 70% had a favourable opinion of Jews. Tellingly, only 17% had a favorable opinion of Israel — and that is the story in a nutshell.

Is Labour leader Jeremy Corbyn an anti-Semite? I don’t know, though highly respected colleagues have made the call that he is. Certainly he seems to get along smashingly with people who probably are. There are documented cases of behavior that can be fairly called anti-Semitic in the Labour Party (as elsewhere) and many people are rightly passionate about his failure to stamp it out with the necessary vigor — a failure made more clear in this week’s leaked report.

Corbyn’s own habit of speaking warmly of radical Muslim terrorists (and autocratic communists) suggests a problem. Keeping Jews out of Labour’s recent ‘diversity video’ was tone-deaf in the extreme. It is compelling that Britain’s normally apolitical Chief Rabbi Ephraim Mirvis saw fit to sound the alarm and put Corbyn on notice last month. But it is also true that the populist right has taken out a contract on Corbyn and he has made it easy, walking into every trap. He is a hard-left sap who dislikes Israel and doesn’t care much what Jews think and probably deserves what he is likely to get at the polls.

But does the world deserve it?

Anti-Semitism and Israel, for all the passions they provoke, are not the main issues in Britain at this time. Jews are right to be concerned, but there is always a question of how much a minority should focus on sectarian issues. To do so purely, when monumental national issues are at stake, may not be the best of balances.

On the ground floor of British politics today, Brexit is the issue. And on the roof the issue is a global cultural war between idiocracy and liberal democracy. On both these levels, Labour, if you look past the Corbyn moment, is actually closer to the Jews. That aligns with the situation in the United States, where an overwhelming majority of Jews, especially the non-Orthodox, support the Democrats despite the Israel-agitated uproar about supposed anti-Semitism (which is generally anti-Zionism) in that party’s leftist ranks.

Brexit is likely to be remembered as a colossal mistake. In the coming global discussion about democracy, it will offer a major piece of evidence supporting the case that the system does not work well in complex situations.

The British are likely to pay dearly if it does go through. Among other misfortunes, they will probably end up with a more Americanized economy, with much exposure to unfettered capitalism, and a far weaker, more expensive and dysfunctional version of the National Health Service. Nationalist bitterness of a sort that historically has not benefited the Jews will simmer. The UK as a political construct may fall apart, with Scotland and possibly Wales finding ways to remain in the EU, and Ireland uniting. My guess is that in 20 years, when the youth who detest Brexit are running the country, rump England will come crawling back to Brussels.

I foresee this despite the EU’s own mockability, with its unelected bureaucrats, its overlapping institutions, its lack of a labor replacement rate and its parliament roving wastefully between Brussels and Strasbourg. But the EU has also kept the peace after two World Wars caused by Europe, created economies of scale, stood for lofty ideals and brought prosperity and open borders to what may be the finest-looking slice of the planet.

The Tories are responsible for this Brexit calamity. And more than any single person, Prime Minister Boris Johnson bears the blame. Having made the mess, Johnson is now banking on enough people’s acquiescence to “just get on with it” – a sentiment most British but also quite weak-willed. The anti-Semitism uproar is insufficient reason to award him such a prize. Even factoring in Corbyn’s impractical socialism, there is no need to allow the 20-year scenario to actually play out.

Though Corbyn, with the lefty’s hatred of “EU capitalism,” is a sad excuse for a Remainer, at present that’s his function. A victory by Labour is the only visible path to the logical  outcome of a final referendum on the deal now on the table (as opposed to the fabulism of the 2016 campaign). Such a second referendum could very well be won by Remain — and if Leave prevails, then at least you’ll know that you’ve left no stone unturned.

A Johnson defeat would constitute richly deserved punishment for the Tories, as justice demands. His flirtation with destroying the UK is a far greater misdeed than Corbyn’s bumbling on anti-Semites in his back benches.

Labour’s chances are severely harmed by the well-meaning Liberal Democrats, who should carefully consider their damaging role in splitting the decency vote (the hard-right Brexit Party on the other side was far more practical in essentially sitting out  the election). Still, one never knows for sure, and in districts where the Lib Dems are stronger than Labour — and such exist — a vote for them is logical (or “tactical,” as the British prefer to say).

In the improbable event that Corbyn does somehow win (perhaps the young will vote this time?), there would be a need to save Britain from his instinct to nationalize and tax, and from his foolish skepticism of NATO. Clearly I am not enthusiastically endorsing the cranky contrarian. But these are fights for another day and they’re winnable, especially if Labour depends on the Lib Dems, as would be the case under any conceivable scenario.

Eye on the ball, “Britons.”  At the end of the day, for all communities in the land, dodging the Brexit bullet is the least bad of a series of deplorable options.