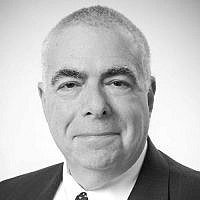 The Blogs
Evan Slavitt
Apply for a Blog
Advertisement
Please note that the posts on The Blogs are contributed by third parties. The opinions, facts and any media content in them are presented solely by the authors, and neither The Times of Israel nor its partners assume any responsibility for them. Please contact us in case of abuse. In case of abuse,
Report this post.

I am officially enraged. For most of my life, I thought that anti-Semitism was slowly but inevitably on its way out. Sure, there were those on the extreme right in the US and abroad who were trying to keep it alive, but after almost two millennia, this abomination was finally dying.

I was wrong. We were wrong. Anti-Semitism is back on both the left and the right, in the United States, the West, and across the globe. In Canada, a Jewish member of the student government is under threat of impeachment just because she might visit Israel. In France, although Jews represent less than one percent of the population, half of the racist acts committed there are against Jews. In the United States, politicians who keep alive the blood libel are not only elected, they are defended. In England, one of the two major parties is headed by someone whose tolerance for anti-Semitism caused the Chief Rabbi to write an extraordinary challenge to his grotesquery.

We can no longer laugh this off as transitory or as a quirk of left- and right-wing extremists. It is here, it is big, and it is bad. In my view, there is no choice. Jews must buckle down and go back to the basic existential fight against prejudice against Jews.

So what does this mean? It is time to stop waffling and backfilling. Let’s start with the easy ones. Hamas is not a liberation movement; it wants to create a Judenrein Middle East. Hezbollah is just as bad. But basically, so it the PLO. Take them at their word (and their maps and flags).

More generally, it is time for Jews to stop bending over backward to keep repeating the mantra that “criticism of Israel is not anti-Semitic.” That is, of course, true (even I feel compelled to say it) but it rarely relevant. The reality is that most of the criticism of Israel is based on anti-Semitism. No other nation is held to the absurd standards implicit in most attacks. When Arabs kill Arabs (even Palestinians), or when Arabs kill Christians, or when the Chinese imprison millions of ethnic Uighurs, the world snores. When Israel allegedly delays issuing a building permit, it is front-page news. Why? Because it was done by the only Jewish state in the world. There may be a few so-called anti-Zionists who truly are not prejudiced against Jews, but the odds against actually meeting one are very high.

BDS? Anti-Semitic to the core. Its founders hated Jews. Its official position calls for the destruction of Israel. We cannot fight what we refuse even to name.

It is also time for Jews to admit that “intersectionality” is a grand hoax designed to marginalize Jews and deny that anti-Semitism is a thing or that Jews deserve to be defended. We have no moral obligation to accept each and every item on the intersectional laundry list as a precondition to demanding that the world confront anti-Semitic prejudice. We do not have to first commit to the Bernie Sanders package to call on him to reject Linda Sarsour as an official spokesperson.

In short, we need to focus. In the U.S., the ADL needs to tend to its knitting and stop wandering around looking for other causes to support. We need to demand that politicians on both the left and the right confront this pernicious creed, especially within their own supporters. We need to stop apologizing for exercising our right to defend ourselves. And then we need to take up the hard slog to do it, for ourselves, our children, and our grandchildren.