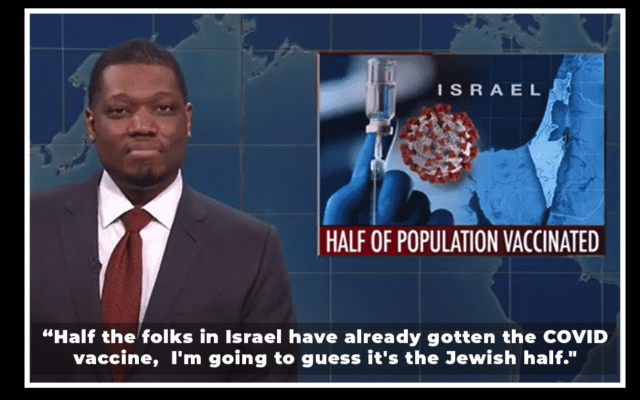 NBC’s “Saturday Night Live” caused a stir when comedian Michael Che, joked about vaccines in Israel. “Israel is reporting that they’ve vaccinated half of their population,” said Che, “I’m going to guess it’s the Jewish half,” was the punch line, which earned him hesitant laughs from the crowd. Needless to say, it’s utterly false. Quite the opposite. Israel has been doing its utmost best to provide the vaccine for all of its citizens, Arabs and Jews alike. The tasteless joke was criticized by many Jewish organizations as well as individuals, while some came to the comedian’s defense, claiming that it was part and parcel of the show’s humor, pushing at the edge.

It’s just a joke. Please don’t take it so hard. How many times have we all heard these exact expressions, or others like them, trying to calm us down, when quips or statements with a vivid antisemitic scent were thrown into in the air?! How many times have we told ourselves, quietly whispering into our minds, that it was just a joke?! As if trying to hide the demon, to push away the worry, to put to sleep the thought that something malicious is hiding behind the supposedly innocent smile. Who would think that there is anything beyond a joke here? It’s ridiculous, we tell ourselves more than once. What could happen? And so, we continued with our daily routine, until the pictures flowed from the synagogue in Pittsburgh. Until shots sliced ​​through the air at the Poway Synagogue in California, where evil broke down the doors while adults hid children and protected them with their bodies. Until the elderly Jew in Williamsburg was thrown down, face first, on the road time and time again as the assailant punched him. That day’s high noon saw no salvation coming, no justice emerging for the Jew, no mercy — but utter silence from the four directions of the intersection.

All were just watching and staring, staring and watching, and ignoring.

SNL’s wrongdoing was not a pointless joke about a single politician or someone’s stupid statement. The fact is that the writer aimed at a defined ethnic group: the State of Israel, the nation-state of the Jewish people, which in American discourse — certainly in its political contexts — is frequently synonymous with the word “Jew.” To their credit, at least, they knew that non-Jews also live in Israel. In today’s world, it’s a lot too. I can not remember how many times I spoke on campuses or at various public events, where I encountered colossal knowledge gaps concerning Israel. Whether it was the thought that only Jews live in Israel or that it was a place of “whites only” (which made them wonder how I relate to all this), it is crucial to face and acknowledge the magnitude of ignorance out there about Israel, and we must never underestimate its dangers. Hey, if you know nothing — or very little — about someone or something, you are prone to believe anything they tell you.

Some people ask: how much damage can an 8-second joke really cause? Maybe this is nothing more than a storm in a tea cup?! Well, you’d be surprised, or not. Designing the way we perceive people or situations is not a one-time event. It is an ongoing process. Our various interfaces with the object over time shape our perception of it. For example, Israel’s perception is more influenced by authentic day-to-day encounters than events that aim to shape image. What does it mean? For the most part, a non-Jewish student studying mechanical engineering, who has never heard of or encountered Israel in his life, is unlikely to attend a lecture by the Israeli Ambassador to the United States at his university’s public policy school. At the same time, if he accidentally crosses the quad on Israel’s Independence Day, he may encounter anti-Israel protesters scattering “blood” on the floor and chanting against the “Zionist apartheid regime.” And make no mistake: this may be the only encounter this student might have with Israel throughout his life. What impression do you think the event leaves on him? Even without going into details or knowing who is right or wrong, it is clear to him from that very spectacle that Israel is a “problematic” issue, one which would be wise to steer away from. With that impression, he will go on to live his life, whether as a CEO of a large company that needs to decide about expanding into the Middle East or as a young congressman about to take a role shaping United States policy.

Words have meaning, even if — and perhaps precisely when — they are incidental or anecdotal. They leave a mark, make an impression, or reinforce a stereotype, and the more “innocent” they are, the greater their power to harm, nestling in the back of one’s mind. And what did the SNL’s “joke” actually tell us? That Israel is the state of the Jews, and Jews take care of themselves only. They do not care about anyone else. And what does the abhorrent antisemitic race theory tell its followers? That is how Jews are in every society, and this is their nature. Beware of Jews because it is only their interest that they see before their eyes.

Antisemitism is not just Nazi swastikas or Molotov cocktail bottles on synagogues. Antisemitism permeates and creates fissures when its thin, flowing stream is allowed to seep through all the holes in society, just as water erodes rocks. A dam needs to be built in front of it, whether it is a flooding and foaming river or toxic, stubborn drops. The demon of antisemitism will not simply disappear by closing our eyes and shutting our ears. It will not go away just because we try to ignore its existence. It must be fought, countered, faced, whenever and wherever it rears its ugly head, even when telling a “joke,” reassuring us that’s all it is.

He who laughs now, will end up crying the loudest.