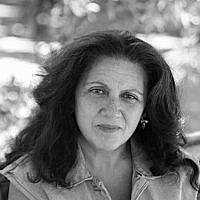 The Blogs
Miriam Assor
Apply for a Blog
Advertisement
Please note that the posts on The Blogs are contributed by third parties. The opinions, facts and any media content in them are presented solely by the authors, and neither The Times of Israel nor its partners assume any responsibility for them. Please contact us in case of abuse. In case of abuse,
Report this post.

Antisemitism is a sad reality older than time, and Portugal is not immune to this horror – you only have to see the comments regarding Portuguese media articles in which Jews, Judaism or Israel are at the core, columnists brandishing an antisemitic lens or journalists who only see one angle. And the idea of money is always attached to Jews.

Hatred of Jews is deeply rooted in Europe. The image of the Jew as the killer of Jesus led to hatred and suspicion. From the Inquisition to Nazi Germany, the path of the vultures was made easier. We should not quake – nor should we attribute metaphorical speeches marked with symbolism, which in this case are as useful as a fur coat in the desert at noon.

The rabbi of the Jewish Community of Porto, Daniel Litvak, had his wrists handcuffed at Francisco Sá Carneiro Airport on Thursday, March 10. It was believed that he was fleeing to Israel via Germany with millions inside his suitcases. The home of the vice-president of Porto’s Jewish community was searched with a fine-tooth comb with the aim of finding bags of money allegedly belonging to Russian oligarchs. Nor was the synagogue immune from the searches. The aim was the same: imaginary banknotes.

Anonymous denunciations were made in sufficient numbers to enable this operation to be mounted – nameless, faceless denunciations, devoid of character such as those that in the 1930s destroyed the honor of Captain Barros Basto, founder of the Porto Jewish Community and its current vice-president’s grandfather. History repeats itself. It is our duty to take actions in response to antisemitism, for that is what it is: antisemitism.

We all know what comes next, something that makes the antisemites slobber – the intense exposure of people linked to the community: the rabbi, president, vice-president, museum curator and friends of the community such as myself.

Those millions of euros or dollars failed to materialize, yet Rabbi Litvak has still not regained his passport. Having certified millionaires such as Patrick Drahi and Roman Abramovich, the once historic Nationality Law was jeopardized and died painfully.

But some pillars do not fall. Activities at the Mekor Haim Synagogue continue in full swing. It is full, with a minyan for eight consecutive years, young people, a kosher restaurant, tourists, a Jewish museum, a cinema, Tzedakah for the whole world, and queues outside the community’s Holocaust Museum.

Although history and the truth do not always go hand in hand, there comes a moment when the page turns and you find out what really happened.

About the Author
Miriam Assor is a journalist, member of the Jewish community of Lisbon and author of the book “Famous Jews of Portugal”.
Related Topics
Related Posts