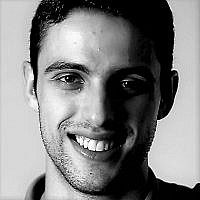 The Blogs
Daniel Schwartz
Apply for a Blog
Please note that the posts on The Blogs are contributed by third parties. The opinions, facts and any media content in them are presented solely by the authors, and neither The Times of Israel nor its partners assume any responsibility for them. Please contact us in case of abuse. In case of abuse,
Report this post.

The following is a real Tinder conversation I had at midnight.

Me: Hey, Lisa! Reading anything good these days?

Lisa: Hey, Daniel! I am! Mostly poetry and theory, though I haven’t had much time to read fiction. What about you?

Me: Oh, cool. What kind of theory? I’m not Israeli, though I am Jewish. I am a Zionist, albeit a very liberal one.

Lisa: Ooh man. I just got out of a relationship so I’m looking for a casual sex partner. But Zionism is an absolute deal breaker for me for friends and romantic [sic] and sex partners. Sorry about that! Good luck with everything!

If Lisa (not her real name) had not been boycotting Zionists, then perhaps I would soon be telling our child the story of HIMYM (for the uninitatied, How I Met Your Mother). “For you see, son,” I would say to Salaam, “what was initially a point of contention between your mother and me turned out to be the thing we most had in common. We both believed in the right to self-determination and were both opposed to The Occupation for this reason.” But I dream.

For Lisa and I do disagree about something, something more basic than the Arab-Israeli conflict, and that is how to navigate disagreement itself. There is nothing wrong with being opposed to Zionism. I am often deeply troubled by the idea of a state — Muslim or Jewish — drawn along ethnic or religious lines. But, I am also deeply troubled by a person’s refusal to engage with people or ideas that they find distasteful. Obviously, there are reasonable limits to ideological pluralism, but there are precious few times when the answer to hateful speech is less speech and not more. I’m following President Obama in this, specifically remarks he made to the United Nations in 2012:

[I]n a diverse society, efforts to restrict speech can quickly become a tool to silence critics and oppress minorities.…[T]he strongest weapon against hateful speech is not repression; it is more speech—the voices of tolerance that rally against bigotry and blasphemy, and lift up the values of understanding and mutual respect.

It is true that certain attitudes in the hands of certain people can be physically dangerous to others and precautions must, especially on dating apps, be taken. But a culture of silence and segregation is also dangerous. If we can’t associate with people we disagree with, then we can’t coexist in the kind of diverse society President Obama alluded to. I wish Lisa had been willing to hear me out even if she didn’t want to start a family. If she had stayed for my spiel, this is what I would have said:

Liberal Zionism and Palestinian nationalism are not mutually exclusive. By liberal Zionism I mean a Zionism that takes as its animating principle the following lines from Israel’s founding document:

THE STATE OF ISRAEL will be open for Jewish immigration and for the Ingathering of the Exiles; it will foster the development of the country for the benefit of all its inhabitants…it will ensure complete equality of social and political rights to all its inhabitants irrespective of religion, race or sex.

The raison d’être of a liberal Zionist state is the protection of people who identify as Jewish and who may be persecuted on this basis. However, a liberal Zionist state is also devoted to safeguarding the rights of its non-Jewish citizens. Tragically, Israel has not made good on the promise of its founding document and is not yet the kind of liberal democracy I would wish it to be. Nonetheless, liberal Zionism as an idea is still very much alive. President Obama, for instance, was famously leery of Israeli Prime Minister Benjamin Netanyahu and his reactionary administration. But, Obama also said this to the Atlantic’s Jeffrey Goldberg: “‘It would be a moral failing for me as president of the United States’ not to defend Israel.”

So why, on something like Tinder, wouldn’t the “liberal” in “liberal Zionism” signal the potential for synergy between singles like Lisa and me? The politics of two people who believe in “full social and political equality” for all Israelis should be substantially similar. One reason liberal Zionism might not pass political muster — and perhaps this is what Lisa had in mind — is that Zionism of any kind is sometimes thought to be racist. Zionism is racist, the argument goes, because Israel identifies itself as a Jewish state, a state belonging first and foremost to its Jewish citizens. That means there are non-Jewish citizens of Israel to whom Israel does not belong, at least not in the same way. It is these non-Jewish citizens who are discriminated against because of their ethnicity. No matter how egalitarian Israel declares itself to be, the very idea of Israel as a Jewish state is ineluctably racist, and so are the policies Israel is bound to pursue.

There is no denying that racism represents a powerful challenge, both to Zionism in general and to Israel in particular. But the racism objection to liberal Zionism as a vision for Israel’s future does not stand up to scrutiny. Because, as noted above, the policies a liberal Zionist government pursues do not, ideally, infringe on the social and political equality of any of Israel’s citizens. The racism objection, then, becomes whether it is realistic or even coherent to make such a claim — to claim that the policies of a Jewish state can be particularist without being discriminatory. Israel can only have one raison d’être, one most important reason for being. If Israel’s most important reason for being is the protection of Jewish lives, then the protection of non-Jewish lives can only be second most important. This is not just a philosophical objection.

Israel’s immigration policy is particularist. It grants automatic asylum to Jews, but not to anyone else, at least not automatically. Is this racist? The answer is not obvious. But the relevant question is not “Is this racist?” but “Racist compared to what?” Should compensatory protections granted to persecuted minorities be considered racist — racist because they protect only the minority so persecuted? Surely this is not what we usually mean by “racism.” If anything, this is closer to reverse discrimination. The idea of a Jewish state, then, is racist in the way reverse discrimination is. And yes, the policies of a Jewish state, even a liberal one, risk reifying this form of reverse discrimination. No form of discrimination is ever ideal but we live, unfortunately, in a less than ideal world.

If you think liberal Zionism’s concession to a less than ideal world is unforgivable then think about things historically. If — after centuries of Jewish persecution when Napoleon Bonaparte first emancipated France’s Jews and granted them equal citizenship, if the Napoleonic emancipation had stuck, if the Enlightenment continued to bear fruit in the way much of Europe (and especially the Jews) hoped it would — then perhaps the racism charge would have merit. Perhaps, in this case, Jews would have no need for an ethnic haven. (Indeed, the idea of an ethnic haven is antithetical to the purpose it is intended to serve; a haven for one people is ipso facto not a haven for others.)

But the Napoleonic emancipation did not stick, not by a long shot. Most of my extended family was murdered in the Nazi Holocaust. By logical induction, both personal and historical, I and many other Jews have concluded, at least provisionally, that the world is not safe for us, that the lesson of Jewish history is that Jews are not safe no matter where they live and no matter how enlightened society happens to be. Personally, then, I’m comfortable, at least for now, with the unsavory compromise liberal Zionism makes with an even more unsavory world.

None of this is to say I’m comfortable with the illiberal Zionism currently in the ascendancy. I believe in: the moral urgency of a two-state solution; an end to the occupation of the West Bank; an end to the siege on Gaza; a return to the pre-1967 borders; a binational Jerusalem; an end to settler violence; an end to the economic disenfranchisement of Palestinians; and yes, reparations and a right of return for a symbolic number of refugees (both things Palestinian President Mahmoud Abbas has agreed to in talks).

The irony here is that I have also been told, by Zionist women on Tinder, that I was unsuitable because of these beliefs, because I am pro-Palestinian. But again, it is not the level of disagreement that concerns me, it is the unwillingness to entertain dissent. Lisa might well have rejected my defense of liberal Zionism and offered her own argument as to why the existence of Israel is unpardonable. Perhaps I would have found Lisa’s argument compelling and been forced to revise my own, or perhaps it would have been Lisa who had to do the revising. Whoever it might have been, and it may well have been both of us, is not as important as the process itself. The process is called dialogue and “Dialogue,” as Pope Francis once remarked, “is what brings peace.”

About the Author
Daniel Schwartz is a graduate student at Georgia State University, focusing on German philosophy of the 18th and early 19th century, especially Kant and Hegel.
Related Topics
Related Posts
Comments