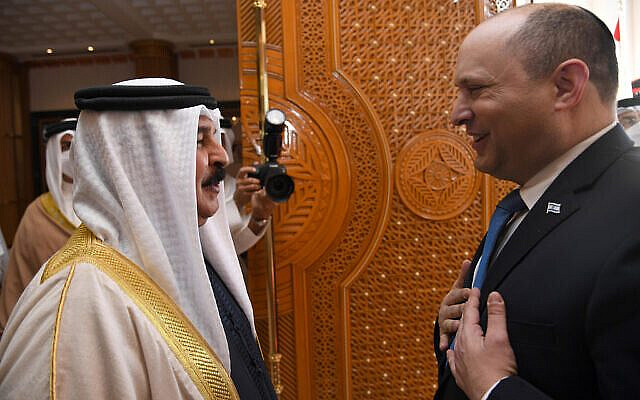 The impressive events in the Middle East the last few days— the official state visit of Israeli Prime Minister Naftali Bennett to Bahrain and the participation of Israel’s petroleum minister at the petroleum conference in Cairo, highlighted by the moving greeting by Egyptian President Abdel-Fattah el-Sisi of Israeli Energy Minister Karine Elharrar—stand in stark contrast to the other track now dominating the region.

That track, which represents a past which has done so much harm to regional parties, particularly the Palestinians, is the track of rejectionism, threats and violence.

Those of us who remember the historic visit of Anwar Sadat to Jerusalem in 1977 recall as well that many had said that no Arab leader would ever recognize the Jewish state, that Islam had no space for any Jewish sovereignty in what they considered the Islamic home.

They were wrong, but there was a big difference between that historic breakthrough and what is happening today. The word that is being used to describe the Abraham Accords is normalization, and we are now seeing a new normalization is taking hold even beyond the accord participants.

The Kingdom of Jordan, which had more elements of normalization than any other Arab country before the Abraham Accords, is now broadening its limited steps to engage with Israel, highlighted by the three-way UAE, Israeli, Jordanian agreement on energy and desalination sharing among the three countries, as well as discussions about interfaith cooperation.

And then comes the gesture of the president of Egypt. It suggests that Egypt, which represented a willingness to break from the Arab rejection of Israel yet also represented a refusal to convert a peace treaty into an actual living peace relationship, may be ready to move forward as well. Not only has no Egyptian president since the treaty visited nearby Israel, (except for the Rabin funeral) but Egyptian non-governmental societies punish any of their members if they communicate or engage with their counterparts in Israel. The president’s very public gesture may signal a new beginning.

And what is most encouraging is that these Arab countries are seeing their self-interest in a relationship with Israel not only in the hard-wire issues of security and economics, but also the softer themes of interfaith relations and tolerance. Yes, Israelis are being accepted because they offer a security booster in the face of Iranian expansionism, and yes Israel has value because of the economic benefits it can bring to Arab countries, particularly oil-centered countries looking to diversify. But Israel also has value as a vehicle to promote greater tolerance and respect between different peoples and faiths in the region.

And while these relationships do not involve the Palestinians, ultimately they can provide incentives and models for both Israelis and Palestinians to seek a different future from the painful past.

All these hopeful signs are unrecognizable when one looks at groups like Amnesty International and Human Rights Watch and the UN body, the Human Rights Council, or the extremist policies, operations and rhetoric of the Iranian regime. All, under varied pretenses, are doing their best to obstruct a move forward toward a more hopeful future for the Middle East.

By their excessive condemnation of Israel, including suggesting what the rejectionists have always claimed, that the Jewish state is illegitimate, they play into the hands of the most retrograde forces in the region, reinforce extremist Palestinian illusions about Israel disappearing from the scene, and make the already difficult path toward reconciliation that much more difficult.

The choice is not between being pro-Israel or anti-Israel. It is rather between offering a vision of a Middle East looking to reconciliation and progress, or one looking for continued extremism and conflict. The choice should be an obvious one.