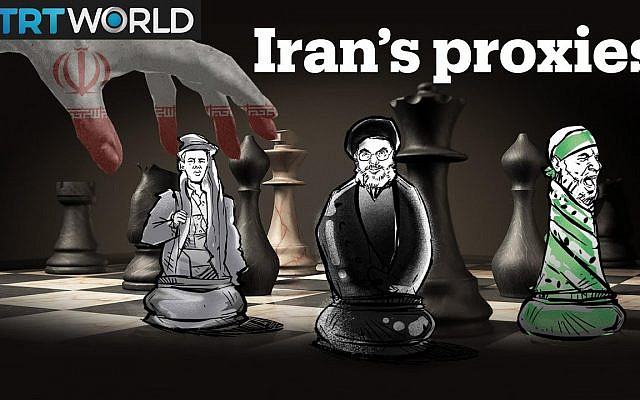 Iranian support for Arab militias has long threatened Iran’s detractors, unable to develop an effective counterstrategy. Now, the tide may be turning.

A string of events suggests that the usefulness of at least some of the militias in Lebanon, Yemen, Iraq, and Palestine is waning as their popularity diminishes and relations with Iran encounter headwinds.

The militias’ changing fortunes and Iran’s seemingly reduced influence challenges fundamental strategic and defense concepts embraced by the Islamic Republic since the clergy-led revolution toppled the US-backed Shah in 1979.

“The overall picture is that Iran’s expansion peaked in 2018 and has since entered a new phase, in which Tehran has not suffered any strategic military set­backs but is hitting a wall. Iran’s biggest fundamental problem is that a majority of its allies … frequently succeed in armed confrontations. Yet they are subsequently incapable of ensuring political and economic stability,” said Middle East scholar Guido Steinberg.

Add to that, almost 43 years later, Iran is in a revolution that, not unsurprisingly, has gone off the rails. Beyond widespread corruption and economic mismanagement, Iran has lost its initial pan-Islamic ecumenical revolutionary appeal to Shiites and Sunnis alike. Instead, Sunni Muslims today perceive it as a Shiite and Iranian nationalist force.

To be clear, Iran is not about to dump its non-state Arab allies. They remain too strong a military force to defeat and valuable leverage of Iranian regional power in Lebanon and Iraq even if they may be past the peak of their shelf life.

Moreover, groups like Lebanon’s Hezbollah and the Gaza Strip’s Hamas could force Israel to fight on two if not three fronts were Israel to strike against Iranian nuclear facilities.

As such, the strategy to build an outer defense line in Arab countries populated by local actors has paid off handsomely.

Hezbollah has become the most powerful political and military force in Lebanon, a player in the Syrian civil war, and a model for militias elsewhere.

Hamas has ruled the impoverished Gaza Strip since 2007 while the Houthis have stymied the Saudi war machine, if not, for all practical purposes, defeated the kingdom in an almost seven-year-long devastating war. Iraqi militias are a force unto themselves.

Protesters have taken the predominantly Shiite Muslim militias to task for promoting a sectarian rather than a national identity that transcends religion and ethnicity.

An alliance of Iranian-backed Shiite militias emerged as the biggest loser in last October’s Iraqi elections. The Fateh (Conquest) Alliance, previously the second-largest bloc in parliament, saw its seats drop from 48 to 17.

Moreover, claims by Hamas in Palestine and the Houthis in Yemen that wars, foreign intervention, and blockades prevent them from delivering public goods and services are wearing thin.

Compared to past military conflagrations, last May, an 11-day war with Israel failed to move the needle on Hamas’s popularity impaired by allegations of corruption and mass unemployment.

Meanwhile, Iran’s ambassador to the Houthis in Yemen, Hasan Irlu, a close associate of General Qassem Soleimani, the powerful leader of the Iranian Revolutionary Guard’s expeditionary Quds Force, who was killed in an American drone strike in Baghdad last year, was reported to have died of COVID-19 while in transit in the kingdom en route to Iran.

Iranian officials blamed his death on a Saudi refusal to allow an Iranian aircraft to pick up the ambassador in the Yemeni capital of Sana’a and fly him directly to Tehran.

Houthi officials said that Mr. Irlu’s illness provided an “opportunity” for the rebels to demand his departure. They said the group had complained to the Iranian leadership about Mr. Irlu’s failure to coordinate with the rebels in his meetings with tribal and political leaders.

Similarly, Esmail Qaani, Mr. Soleimani’s successor as commander of the Qods Force, encountered pushback when he met in July with pro-Iraqi militias In Baghdad. Mr. Qaani sought to ensure that they would refrain from attacking US targets in the runup to renewed nuclear negotiations in Vienna.

“That decision is an Iraqi one,” said Qais al-Khazali, the leader of Asaib Ahl al-Haq or Khazali Network, in a television interview days later.

“Iran isn’t the way it used to be, with 100% control over the militia commanders,” said an Iraqi Shiite political leader

That is a realization that has yet to take root in Tehran, and once it does could have far-reaching consequences for Iranian policies and posture. Initially, Iran’s cost/benefit analysis is likely to conclude that the benefits of support for non-state Arab militias continue to outstrip the cost.

The question is, for how long.