Parents might want to think twice about letting their kids attend UMASS Amherst in September. Maybe a gap year is a good idea, especially if their child has political beliefs that run counter to those that dominate the campus at UMASS Amherst. 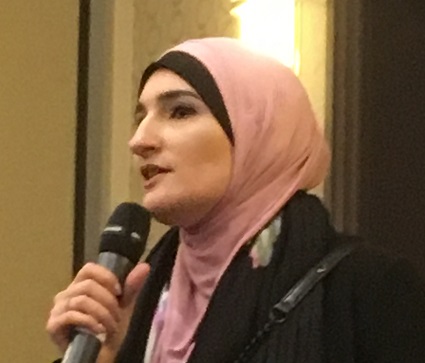 Linda Sarsour speaks in favor of BDS at a session that took place during the Annual Meeting of the American Academy of Religion on Novmber 19, 2017. Sarsour, who has said ugly things about women with whom she disagrees, has appeared twice at UMASS Amherst in recent years. (Dexter Van Zile)

Judging from a $27 million lawsuit being prepared against UMASS Amherst, the school may not be a safe place for learning, free inquiry, and ideological nonconformism. For all the lip service the school’s faculty gives to free speech and the right to dissent, there’s evidence the school is not such a good place for students who disagree with the anti-Israel, anti-American, and anti-Western narrative that has taken root in higher education in the United States.

Outside agitators like Palestinian-American Linda Sarsour are allowed to promote their radical politics at UMASS Amherst while students who pay tuition and attend classes at the school must either toe the party line or keep their mouths shut. If they actively protest the agenda, they might be driven out of school by a coalition of students, faculty, and administrators.

According to attorneys Karen D. Hurvitz and Ilya Feoktistov, that’s what happened to former UMASS student Louis Shenker. According to Hurvitz and Feoktistov, Shenker was driven from the school by a network of students, faculty members, and administrators who disagreed with his politics and smeared him as a white supremacist. One commentator has called the events recounted in legal documents sent to UMASS by Shenker’s attorneys a “witch trial.” The story has also made The American Spectator and Legal Insurrection.

Shenker’s problems at UMASS Amherst began on Dec. 6, 2018 when the Graduate Employee Organization (GEO), which represents graduate students at the school, held a rally. The rally was ostensibly organized to protest an uptick of racist and antisemitic graffiti being painted in the school’s dormitories.

Shenker regarded the rally with suspicion and, according to an incident report prepared by the police department at UMASS Amherst, “had arrived at the event to form a counter protest against GEO.” According to UMASS Amherst regulations, counter-protests are protected speech. Shenker was well within his rights by holding a sign and talking to other protesters.

Shenker is no shrinking violet. At the age of 17, he snuck into a Democratic presidential debate and shook hands with candidate Hillary Clinton (who complimented him on his handmade silk jacket). And like any good campus protester worthy of the name, he came with a message of his own. “Mr. Shenker told me that he arrived at the Student Union wearing his red ‘MAGA’ hat, carrying his poster, and while wearing a t-shirt with Bill Clinton’s image printed on it and the word ‘Rape’ under the image,” the author of the police report stated.

Things got ugly during a confrontation recounted by Shenker’s lawyers as follows: “Video shows that when Louis, who is 5’6’’ and 140 pounds, arrived wearing the MAGA hat and holding a large sign, he was immediately surrounded by a hostile mob of older grad students cursing at him and calling him a white supremacist. A woman lunged from the mob and snatched Louis’s MAGA hat.”

The police report states that “Mr. Shenker further alleged that a member of the Democrat Socialists of America interfered with a local media crew as the newsmen attempted to interview Shenker, resulting in the crew’s inability to complete their interview with Shenker.”

Shenker told UMASS police that at one point the crowd “gathered closer to him and began ‘pushing and shoving’ him, while making threats” and that “several persons approached him and called out, ‘We know where you are!’ and ‘We will find you.’”

According to the police report, “Shenker stated that he later saw the woman who had taken his hat. and when he asked for its return, she […] stated to him: ‘Fuck off! Get the fuck out of here! Fuck out of here little white supremacist!’”

The irony is palpable. A pro-Israel activist adapts Saul Alinsky’s tactics to promote a conservative agenda on a college campus and no one can’t handle it.

Taken together, the police report and the complaints filed against the school tell a story of a group of UMASS employees and their allies harassing and bullying a tuition-paying student into silence by calling him a white supremacist and a Nazi. (Shenker, by the way, is Jewish.) And he was threatened at a rally organized by people whose salaries he was paying.

A few weeks later, Shenker enrolled in a mandatory English writing class at UMASS Amherst, and lo and behold, his instructor was the very same woman who had previously harassed him at the rally by stealing his pro-Trump hat and calling him a white supremacist.

To avoid any unpleasant confrontations with the instructor, Beth Peller, Shenker disguised himself by shaving off his facial hair and by regurgitating her far-left views in his writing assignments. (He got an A in the class.)

Peller subsequently filed for (and got) a restraining order against Shenker in the local district court, testifying under oath that he had whispered threats into her ear during the event.

In a complaint letter sent to UMASS Amherst on Dec. 13, 2019 Karen D. Hurvitz, Shenker’s attorney, reported that under subsequent challenge, Peller “could not say into which ears these threats had been made, how far away from her ear Louis’s whispering mouth was, or how many threats he made.” Peller couldn’t remember the substance of any the threats made and she implausibly stated he threatened her during the entire event. Video of the event indicates he was never anywhere near her ear, Hurvitz states.

Nevertheless, the restraining order was issued and served on Shenker, prompting him to issue a video in which he threatened to “sue the s—t” out of Peller. In response to this video, Peller went to the Northampton Police Department and complained that Shenker had issued “death threats” against her. Shenker was arrested and spent two nights in jail. The restraining order against Shenker was ultimately vacated for insufficient evidence, as was the charge associated with “death threats” against Peller.

About a month prior to Shenker being forced to spend two nights in jail for violating a restraining order — that was later rescinded for lack of evidence — faculty members and an administrator had already been corresponding with one another about Shenker. One of the correspondents declared that Shenker’s views “are not the kind we want to cultivate at the university.”

In the “witch trial” piece mentioned above, Victor Rosenthal quotes emails among three university officials — UMass Amherst Associate Professor of Political Science Maryann Barakso, Associate Professor of Legal Studies and Political Science Lauren McCarthy, and Assistant Dean of the College of Social and Behavioral Sciences Kelly Gray. The emails, sent in mid-October, include the following passages (which have been confirmed by Hurvitz):

Barasko: We need to talk about Louis. He is becoming a major problem to a faculty member at our department and his views are not the kind we want to cultivate at the University. As you know he is Jewish.. so we have to be very careful and smart in how we deal with this problem.

McCarthy: I agree Louis is becoming increasingly hostile and threatening. We’ve dealt with other problem students in the past successfully and you know nobody likes a racist so we can handle it. I have a contact in UP that can make this work.

Barasko: Update. 1st step. Let campus know Louis is a problem, with the truth about his name out…any subsequent protest about him will lack credibility. The right RSO [registered student organization] has been inspired to post flyers

Maybe there is an innocent explanation for these email statements (the legitimacy of which has been verified by Hurvitz), but UMASS Amherst’s press office has not responded to phone and email inquiries about the email quotes above.  No one has ever denied them, Hurvitz reports.

The authors of the emails have also not responded to email inquiries. Maryann Barakso has, however, posted a Tweet telling Twitter CEO Jack Dorsey that the article in The American Spectator is “defamatory.” In the same Tweet, Barakso says copies of the lawsuit have been “plastered” all over the campus of UMASS Amherst.

Nevertheless, the emails seem to suggest that there was a coordinated, agreed-upon effort to encourage a student organization to post fliers about Louis Shenker on the campus of UMASS Amherst.

In December 2019, UMASS Amherst was “plastered” with leaflets describing Shenker as a white supremacist, an incel, and a Trump supporter. One of his critics posted a photo of one of the flyers (which included an image of Shenker) on Snapchat and declared, “[W]atch out for this pussy ass b*tch. if you see him smack the dogsh*t out him.” The administrator of a Facebook page called “Overheard at UMass” declared, “I’D LIKE TO PREORDER THIS MANS HEAD ON A PLATE.”

Between the flyers and having his tires slashed, Shenker stayed away from school during exams. Hurvitz’s efforts to get the school to intervene and stop the harassment against him failed. Instead of protecting him, administrators expelled him.

Here’s the kicker. A few years ago, Linda Sarsour said that she wished that Ayaan Hirsi Ali and Bridgette Gabriel’s vaginas could be taken away, a pretty atrocious statement given that Ali is the victim of female genital mutilation. She lauded Imam Siraj Wahaj, an unindicted co-conspirator in the 1993 World Trade Center bombing who has said homosexuality is a disease.

Despite these and many other statements, Sarsour has spoken at UMASS twice — at the invitation of Sut Jhally, the head of the school’s communication’s department who, ironically enough, has made a number of films condemning the objectification of women’s bodies in American media.

If Sarsour can speak at UMASS Amherst twice and use university resources to promote her opinions, UMASS should be able to protect the first amendment rights of Louis Shenker, a student at the school. Any school that protects the rights of an outside agitator like Sarsour should be committed to protecting the rights of its own students.

He is, after all, paying the freight for the school’s operation! So are Massachusetts taxpayers. They are paying UMASS President Marty Meehan more than $650,000 a year to, among other things, serve students like Louis who are going into debt to pay for their schooling!

But for one reason or another, UMASS Amherst, which has provided a venue for Omar Barghouti, who has defended Palestinian terrorism and Roger Waters, the former bassist for Pink Floyd who has a long history of demonizing Israel and Jews, can’t protect the first amendment rights of one of its own students.

In light of this, it seems reasonable to ask if a family that allows its children to attend UMASS Amherst is guilty of parental malpractice — the moral equivalent of Joseph’s brothers throwing him down a well.

Things might turn out OK in the long run, but who wants to take the risk?