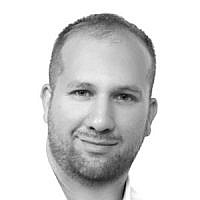 The Blogs
Yaakov Lappin
Apply for a Blog
Advertisement
Please note that the posts on The Blogs are contributed by third parties. The opinions, facts and any media content in them are presented solely by the authors, and neither The Times of Israel nor its partners assume any responsibility for them. Please contact us in case of abuse. In case of abuse,
Report this post.

In recent days, Israel’s Military Intelligence Directorate received a new commander. During his welcoming ceremony, the incoming intelligence chief, Major-General Tamir Heiman, provided a glimpse into the scope of the challenges awaiting him.

“The reality in the Middle East is complex, and constantly changing,” he stated during his speech. “Although this sentence was probably said by all previous Intelligence Directorate heads during their time, and they fully meant it, I find it to be true – many times over – today, when the pace of change and its intensity are unprecedented.”

Heiman’s observation regarding changes in Israel’s strategic environment also speaks to the need of Israel’s defense planners to keep up.
Israel Defense Forces (IDF) planners are doing this by closely monitoring the changes, and even revising and reexamining terms that were once taken for granted.

For example, in recent years, the IDF has stopped viewing Hezbollah as a mere terror organization or guerrilla force, and has begun viewing it as an army. Hezbollah’s disciplined hierarchy, its evolved ability to seize enemy territory, gather intelligence, and direct firepower in a concentrated manner, as well as fight in larger, well organized formations (abilities acquired largely in the battlefields of Syria), make it army-like. In addition, Hezbollah’s surface-to-surface firepower, consisting of an arsenal of some 120,000 rockets and missiles, is bigger than that of most NATO states.

Another example of the need to redefine old concepts can be found in the thousands of homes in south Lebanese Shi’ite villages, converted by Hezbollah into rocket launching sites.

Is a building that looks residential on the outside, but which hides rockets in it, ready to be launched at Israeli cities, a home? Or is this an Iranian-sponsored military site, designed to attack Israeli cities, with human shields living in it?

This kind of reexamination is essential for understanding the military-strategic environment taking shape around Israel.

In Syria, the Assad regime is now close to achieving victory over the Sunni rebels groups. Does that mean Syria is now a country again, rather than an imploded, failed war torn state?

Or is the ‘new Syria’ actually a component of a larger Iranian axis; an essential piece of Iran’s new land bridge, which links the Iranians to Lebanon, via Iraq and Syria?

Iran’s new land bridge means that it could try to move significant armed forces and weapons in Israel’s direction in the future.

Even when Assad achieves victory, Syria will not meet the standard definition of a sovereign state. Iran is seeking to construct military bases and weapons factories on Syrian soil. It is assembling militias and terrorist cells that will use Syria as a launch pad for future attacks on Israel. This is testament to its future regional role.

In Gaza, Hamas is far more than a terror organization, and also needs to be redefined. Since seizing power violently in 2007, Hamas has become an Islamist regime, with its own armed force, police, schools, and media. Hamas’s military wing has evolved into a kind of terrorist army, made up of territorial brigades and battalions. Hamas has learned how to coordinate complex strikes from multiple directions, move personnel and weapons in underground tunnels that crisscross Gaza, develop combat doctrines, and create its own domestic weapons industry.

The IDF has, of course, observed all of these developments, and is making its own changes accordingly.

Recently, it created a new category of combat brigades, called Gideon, who will be tasked with quickly taking the fight into enemy territory if necessary. These brigades would join a second group of units, made up of elite commando forces, which can travel deep into enemy territory for long periods.

The IDF’s infantry and armored units are training more than ever before, and they are focusing their training on urban warfare scenarios unlike any time in Israel’s military history.

In some military circles, the words ‘preparing for war’ is favored over the term ‘training.’

Meanwhile, an array of new, hi-tech weapons and sensors are entering service. These will give ground units an ability to hit targets that appear and vanish quickly – just the type of targets that Israel’s foes represent.
The Israel Air Force (IAF) has revolutionized its abilities to gather intelligence, share it with the rest of the military, and launch strikes on targets near and far. If need be, the IAF is capable of striking several thousand targets in a single 24 hour period, representing a level of firepower yet to be seen in military history.

The arms race between Israel and its enemies, and the race of minds, as well as the regional changes, show no sign of slowing down any time soon.