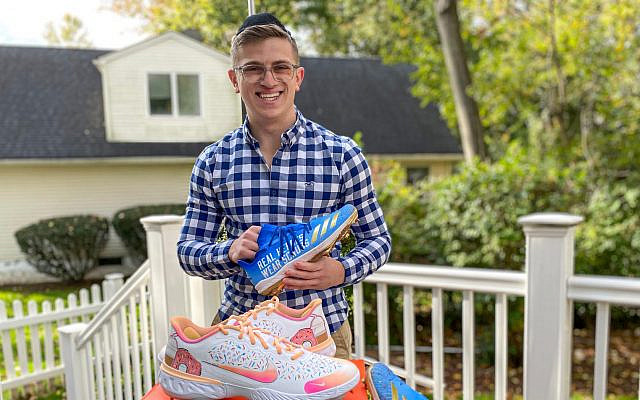 Members of closely knit religious communities build up a strong sense of identity and are often prone to seeing secular education as a potential threat to their religious values. Seeing secular growth as a threat can limit opportunities for all and make it difficult for many to actualize their gifts and strengths.

Ari Solomon is from Teaneck, a small Town in New Jersey where the Jewish community makes up over 40% of the population. Solomon attended Jewish schools as a kid and is currently enrolled at Yeshiva University in New York. However, Solomon’s religious upbringing hasn’t stopped him from finding success in the outside world.

As a kid, Solomon developed an interest in graphic design by designing logos for Bar Mitzvahs within his local community. A keen interest in sports meant that Solomon started creating shoe designs when he reached College. He is now associated with Stadium Custom Kicks, a custom footwear company that designs cleats and sneakers for professional athletes.

In a young career, Solomon has managed to add  many famous athletes to his clientele. The CY young winner Jacob DeGrom wore Solomon’s cleats that were later auctioned for $8000 in a charity event on the MLB website. His cleats were also worn at the World Series by Tampa Bay shortstop Willy Adames. St. Louis Cardinals outfielder Dexter Fowler is another prominent client.

Solomon also has his own social media show on instagram and has invited more than 30 athletes to it. He has got this far in his career while remaining a devoted, practicing Jew. He believes that being a practicing Jew has not hindered his ability to grow in the secular world. He is actively pursuing a career in sports designing and makes no secret of his dedication to his Jewish faith.

“I am very grounded in religion and dedicate much of my time to learning Torah and other religious studies.”

Solomon has kept climbing the ladder of success without giving up on his faith. If anything, it’s the discipline instilled into him by his faith that helps Solomon balance out his work life with religion.

“I keep a list of everything I need to accomplish in a day and never go to sleep until everything on the list is checked off,” says Solomon. “That list always includes praying three times a day and learning Torah”.

Ari Solomon’s entrepreneurial success shows that secular progress isn’t mutually exclusive with religious growth. It’s just about striking the right balance between work and religious duties. In fact, exploring the outside world can open doors to greater opportunities. On the other hand, seeing secular progress as a threat to religious values is counter intuitive. Ironically, It can result in alienation from religion.

More and more Jews living in the U.S are moving away from religion. A 2018 Pew Research study found that nearly half of US Jews don’t identify with organized religion. The ratio is even greater in the younger generation. Much of it can be down to a perceived conflict between religious values and the “American Dream” of progress and prosperity.

Entrepreneurs like Ari Solomon provide the much needed proof that all such perceptions are flawed. Success can be found while being immersed in one’s faith.