On Sunday, August 16, 1987, The New York Times published Barbara Delatiner’s article “Artist’s ‘Angel’ to Fly by Computer” that I present in part on August 16, 2017 in The Times of Israel. She interviewed me at the Fine Arts Museum of Long Island about my one-man exhibition “Angels of Peace.” From the Museum, I connected Long Island to the 48 states on mainland USA via a faxart event. 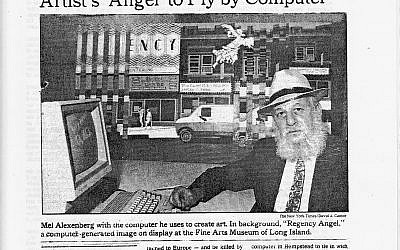 Although this project is conceptually as relevant today as it was 30 years ago, fax technology has morphed into the Internet, smartphones and social media. I explore the spiritual dimensions of this change in my newest book Through a Bible Lens: Biblical Insights for Smartphone Photography and Social Media. The cover of the book uses the same digitized Rembrandt angels that appeared in my 1987 exhibition. However, they appear in 2017 ascending from a smartphone screen showing a NASA satellite image of the Land of Israel. See http://throughabiblelens.blogspot.com. 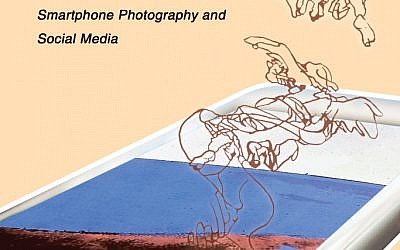 As a child on Long Island during World War II, Mel Alexenberg had a recurring nightmare. “Because the Island wasn’t connected to the mainland,” he recalled, “I kept on dreaming that we’d float away and be connected to Europe – and be killed by Hitler.”

More than 40 years later, Mr. Alexenberg, now a noted practitioner of computer-generated art whose works are in the permanent collections of museum throughout the world, is about to do something about joining the Island to North America, if only for the 13 seconds it will take for a computer in Hempstead to tie in with a computer in California.

As part of his one-man exhibition “Angels of Peace,” which opens Tuesday at the Fine Arts Museum of Long Island in Hempstead, he will send his “Long Island Angel” flying, via computer a telephone hookups, to 48 mainland states and the District of Columbia where images will be rematerialized on facsimile machines. 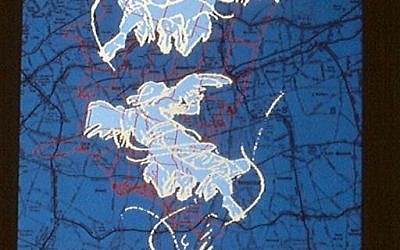 “We’ll probably transmit to newspapers because they already have fax machines, said Jamie Z. Young, director of the Hempstead museum’s Computer Imaging Facility. “That way we hope they’ll send back clippings. And a museum in every states will get a copy of a limited-edition serigraph ‘A digital Homage to Rembrandt.’”

The event will mark the first transmission of what is called “fax art’ in America, Mr. Alexenberg said. Last March, Mr. Alexenberg who calls himself a ‘conceptual artist,” send his angles, digitized – translated in computer language – from a Rembrandt image from Jaffa, Israel, to New York, Los Angeles, Paris, Amsterdam, Tokyo, Melbourne and Buenos Aires.

More than just a technical feat, “to show that it can be done,” the electronic angel launching, from the museum at noon on Sept. 3, is meant to “link Long Island to the rest of the country, both physically and in spirit,” the artist said. “It parallels the biblical commentary in Jacob’s dream that angels go up from the land and come down in other places throughout the world.”

In 1969, he and his family moved to Israel, where he has taught at Tel Aviv and Bar-Ilan universities and the Bezalel Academy of Arts and Design. He founded and directed both Ramat Hanegev College and the Experiment School of University of Haifa. Today, he is chairman of the art department at Pratt Institute and research fellow at M.I.T.’s Center for Advanced Visual Studies.

An Orthodox Jew with what he called a “strong Hasidic connection,” Mr. Alexenberg tends to discuss his art in terms of mysticism in the kabbalah and bilingual letter play. For example, during an interview at the Fine Arts Museum – where his show of computer-generated paintings, lithographs, etchings, serigraphs and mixed-media works runs through Oct. 25 – he explained how traditional Judaism and modern technology are inexorably linked to his particular art.

“The Hebrew term for ‘computer angel,’” he said “is ‘MaLaH MaHSheV,’ which is the masculine form of the term for ‘fine art,’ or ‘MeLeHet MaHSheVeT.’ Art and angel are basically the same word in Hebrew. Its root is ‘going,’ the action of communicating a message.

So, and angel is a divine message, and inspiration received by the artist guiding him in his transformation of the material world. The artist, through his work, creates new angels that emanate from his work, communicating to others the qualities of his inspiration.

“But Jewish art,” he said, “is distinct from Western, or Hellenistic, art in a very basic way. The English word for ‘art’ is the root for such words as ‘artificial’ and ‘artifact.’ Similarly, the French word ‘ars’ and the German word ‘kunst,’ as well as art in all European languages, are related to imitation, copy, phony, counterfeit and falsification. On the other hand, the Hebrew word for artist is not only different, it’s opposite. It’s the same word as truth, faith, craft and education.”

“Furthermore, in Western art, the artist’s task is to imitate nature as if it were the height of creation. Judaism, however, does not view nature as complete or ideal. It – and therefore Jewish artists – see the artist and God as partners in an ongoing creative process. It is imitation the Creator, rather than the creation, that is valued.”

“As I wrote in the exhibit catalogue,” he said, “the words ‘art,’ ‘food’ and angel’ are all written with the same Hebrew letters. As an artist, I am most interested in pointing out the spiritual in everyday life. I strive to make the ordinary extraordinary. I aim to show the miraculous in the mundane.”