Once again, we have followed in the footsteps of our forefathers.

During the height of last summer’s Operation Protective Edge, Hamas leaders in Gaza produced a Hebrew language propaganda video aimed for the Israeli home front. Featuring a jingle “Arise! Attack!,” it displayed Hamas terrorists launching missiles at Israeli civilian targets. But the video backfired. Israelis immediately began producing spoofs of “Arise, Attack,” in soulful piano, and a capella. “Arise!, Attack!” was a must-play track at weddings. Israelis were demonstrating the dynamics of appropriation: taking the symbols and propaganda of those who threaten them, and re-employing them as tools of spiritual resistance.

At the Seder table we recalled how God delivered Israel from Egypt “with a mighty hand and an outstretched arm.” Most would be surprised to learn that this biblical phrase is actually Egyptian in origin: Egyptian inscriptions routinely describe the Pharaoh as “the mighty hand” and his acts as those of “the outstretched arm.” In fact, the book of Exodus extensively appropriates the royal propaganda of the greatest of all the Pharaohs: Ramesses II.

The paramount achievement of Ramesses II (reigned 1279-1213 BCE) — known also as Ramesses the Great — occurred early in his reign, in his victory over Egypt’s arch-rival, the Hittite empire, at the battle of Kadesh: a town located on the Orontes River on the modern-day border between Lebanon and Syria. It is believed to have been the largest chariot battle in history. Upon his return to Egypt, Ramesses inscribed accounts of this battle on monuments all across the empire. Ten copies of the work, known as the Kadesh Poem, exist to this day. These multiple copies make the battle of Kadesh the most publicized event in the ancient world. Many Egyptologists believe that the Kadesh Poem was a widely disseminated “little red book,” aimed at stirring public adoration of the valor of Ramesses the Great.

Some 80 years ago, scholars noted an unexpected affinity between the biblical descriptions of the Tabernacle and the illustrations of Ramesses’ camp at Kadesh in several bas reliefs that accompany the Kadesh Poem. The proportions of Ramesses’ throne tent, surrounded by his army on four sides, exactly match those of God’s Tabernacle sanctuary as depicted in the Book of Exodus: 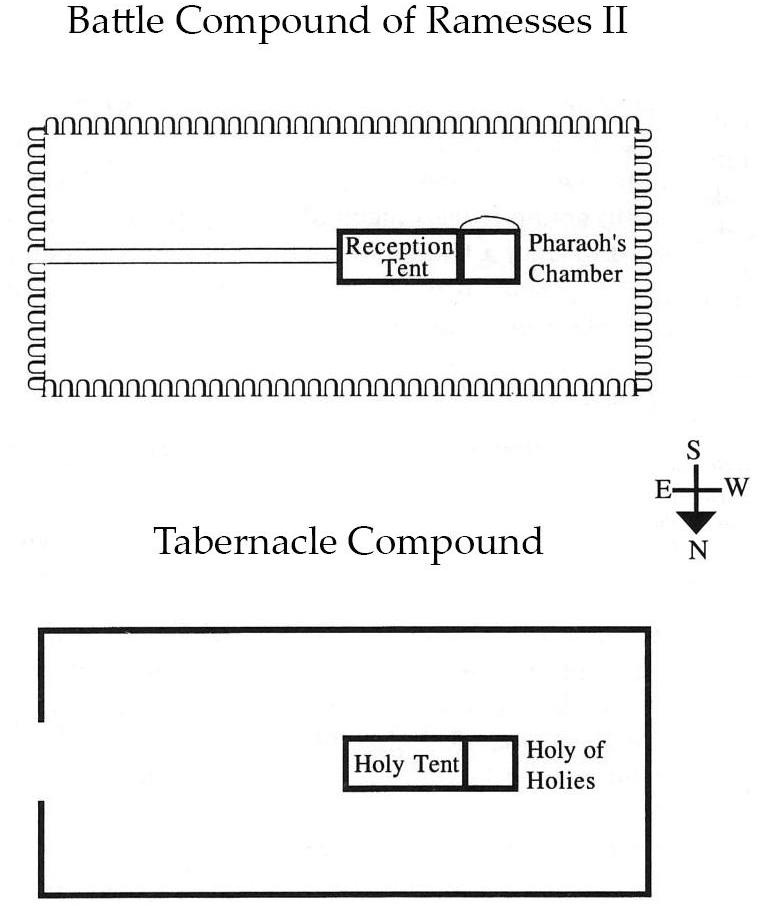 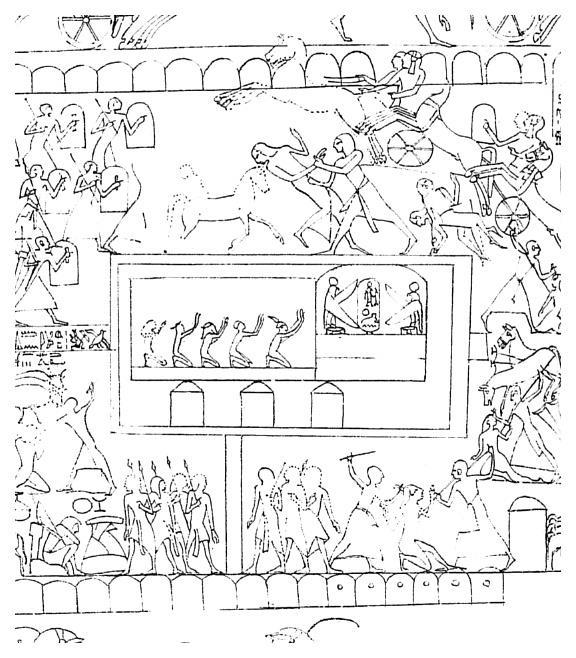 Some scholars suggest that the Bible reworked the throne tent ideologically, with God displacing Ramesses the Great as the most powerful force of the time.

The two accounts follow a similar sequence of motifs and images seen nowhere else in the battle accounts of the ancient Near East. Here are the main parallel elements: Ramesses’ troops break ranks at the sight of the Hittite chariot force, just as Israel cowers at the sight of the oncoming Egyptian chariots. Ramesses pleads for divine help, just as Moses does and is encouraged to move forward with victory assured, just as Moses is assured by God. Bas reliefs depict the Hittite corpses floating in the Orontes River: 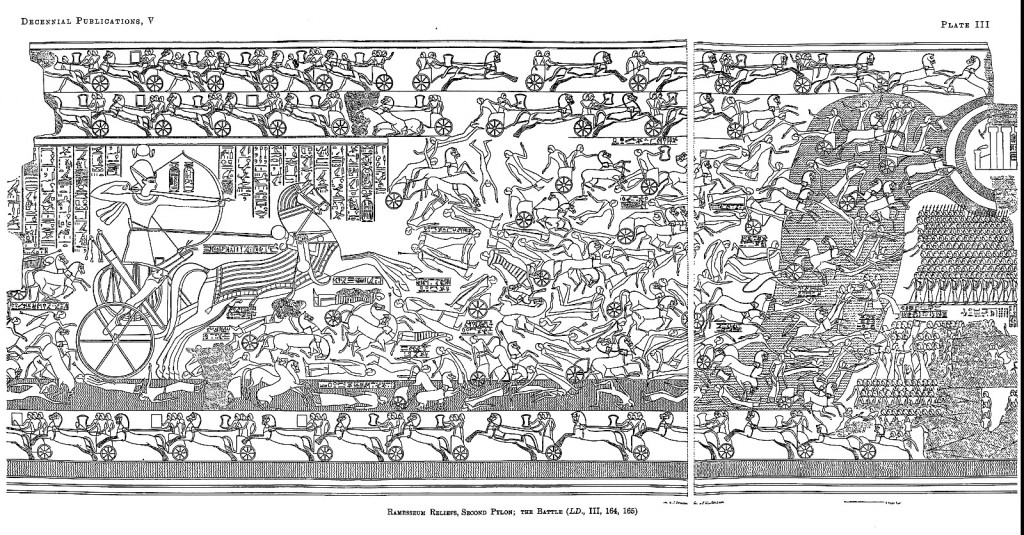 Corpses of Hittite troops in the Orontes River on the second pylon at the Ramesseum (image from James Henry Breasted, The Battle of Kadesh: A Study in the Earliest Known Military Strategy [Chicago: Chicago University Press, 1903] pl. III)

Most strikingly, Ramesses’ troops return to survey the enemy corpses. Amazed at the king’s accomplishment, the troops offer a victory hymn that includes praise of his name, references to his strong arm, and tribute to him as the source of their strength and their salvation. Likewise, The Israelites survey the Egyptian corpses and offer a hymn of praise to God — the Song of the Sea in Exodus 15 — that contains many of the same motifs found in the hymn of praise by Ramesses’ troops. Ramesses consumes his enemy “like chaff” (cf. Exodus 15:7). Both the Kadesh Poem and the Exodus Sea account conclude with the “king” (Ramesses and God respectively) leading his troops peacefully home, intimidating foreign lands along the way, arriving at the palace, and being granted eternal rule. (For more details see my essay, Was There an Exodus?)

The latest copies of the Kadesh Poem in our possession are from the reign of Ramesses himself, and there are no references to it, or clear attempts to imitate it, in later Egyptian literature. There is no evidence that any historical inscriptions from ancient Egypt ever reached Israel. This suggests that it is unlikely that an Israelite scribe living centuries later would have known about the Kadesh Poem, let alone borrow from it to inspire his own people.

To date, no trace of the Exodus has been found in Egyptian sources or any mention of a people Israel. The biblical adaptation of the Kadesh Poem suggests that Israelites were a minority presence in Egypt under the subjugation of Ramesses II.

The fact that the Kadesh poem retained such currency throughout biblical Israel suggests that the book of Exodus preserves the memory of a moment when these Israelites were relieved from Ramesses II’s subjugation. Reaching for language with which to exalt God’s mighty virtues, they found material in the tropes of one of the best-known accounts of perhaps the greatest Egyptian monarch — and proceeded to “out-Pharaoh” the Pharaoh himself.