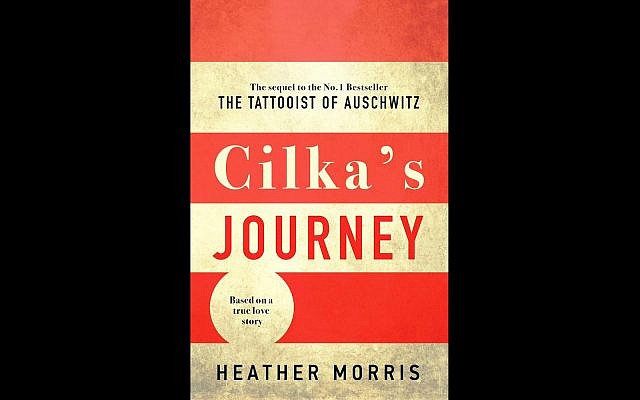 “[The Jews] feel protective and a degree of guardianship over the Holocaust story. I totally get that but maybe there’s room for both of us?”

That’s Holocaust romance writer Heather Morris defending her two controversial novels in a rather offensive and aggressive manner in a recent interview. Her statement is tone deaf and borderline anti-semitic, according to one Jewish observer I spoke with.

So here’s the latest development: As this blog reported just the other day, even after literary critics and Holocaust scholars questioned the publication in 2018 of Heather Morris’ unvetted and un-fact-checked romantic sexcapade novel “The Tattooist of Auschwitz,” set in a Nazi concentration camp in the 1940s, the Australian publisher has decided, along with her marketing department, to completely ignore the criticism from the Auschwitz Memorial center in Poland and forge ahead with the planned October release of a so-called “sequel” to the first novel in what is now said to be part of a four-part series.

So here’s the follow-up: A Bestselling New Zealand author vows to keep telling the stories of Holocaust survivors, despite vocal criticism from Auschwitz historians.

Last week, Morris announced plans to release a sequel, telling the story of another Auschwitz survivor. In the face of widespread criticism from official Holocaust historians, Morris told the ”Stuff” website that she won’t stop at two books. She has more personal stories to tell, from others who survived those Nazi concentration camps, she confessed to the reporter.

The Auschwitz Memorial Research Center issued a lengthy critique of her debut novel, saying the first novel contained “numerous errors and information inconsistent with the facts, as well as exaggerations”.

Morris, however, told the Stuff reporter that she has no regrets about how her first novel and the sequel were researched, even though she doesn’t say who the researchers she hired are and what their qualifications were. She refuses to name them.

“I believe it was his version of what happened, and [my publisher had] researchers doing their best to verify what they could, but so much of this was not on documents, files were destroyed, and his story was not documented,” she confesses.

So the story she based her controversial bestselling Holocaust novel on was based on so-called “research” that did not rely on archived documents or files and mainly relied on “memories” she was able to coax out of an elderly Holocaust survivor in his 80s who she befriended in Australia at the behest of his son, Gary Sokolov, who now disavows the “Tattooist” tale.

Morris claims, without naming them, that ”professional researchers” verified the “factual parts of the elderly man’s fuzzy memories. She’s also comfortable with the accuracy of the two novels so far, given that her aim was always just to tell the personal recollections of Holocaust survivors, McConnell reports.

Fighting back in a somewhat rude and aggressive way, Morris, in her 70s now, told the New Zealand newspaper last week: “When you have someone [like Lali] who was there, saying what happened — sorry, I’m going to write that.”

The Te Awamutu-raised author, who moved to Melbourne in the 1970s, says “Tattooist” omitted significant stories because her hired ”researchers” were unable to get a second piece of evidence to back up Lali’s claims.

She says this again without naming who these so-called ”Holocaust researchers” were or what outfit they worked for. Some say they were not professional Holocaust historians or researchers at all but just hired hands that a movie company employed to cover for any of Morris’ gaffes. Since then, she says, these researchers have found evidence to back up some of Lali’s other stories, she told McConnell, adding: “I would give anything to rewrite “Tattooist’ and include those.” She told the New Zealand newspaper that while she completely ”sympathizes” with her critics at the Auschwitz center in Poland, she vows to keep telling stories from Holocaust survivors.

And here comes the worst part of the Morris interview: “[The Jews] feel protective and a degree of guardianship over the Holocaust story. I totally get that but maybe there’s room for both of us?”

So the sequel to “Tattooist,” dedicated to the author’s legions of female fans around the world, is due out in October, and will tell the story of Cilka Kaufmannova. As a Jewish teenager, she was imprisoned in Auschwitz and, as Morris wrote her first novel, she was raped by the SS guards and became a sex slave to the Nazi camp commandant. His Jewish whore, in other words.

But the Auschwitz Center says that never happened in real life. Nazis were not allowed to have sex with concentration camp inmates and never did. As Morris tells it to McConnell, ‘Cilka’s story is truly horrific. She survived Auschwitz only to be sent to a Russian gulag after the war was over — “probably the worst Russian gulag there was” — for having sex with the Nazis.

Like Lali Sokolov, Cilka is said to have found love even in the most horrid of circumstances in the Russian gulag. It’s the story of love, and hope, which Morris says makes her romance genre novels different from other Holocaust novels.

So to sum up where things stand now: The news of a “Tattooist” sequel was welcomed by Morris’ fans, but the Auschwitz Memorial was quick to hit back. “The story of Cilka was one of the most questionable part of The Tattooist of Auschwitz,” the center said in a Tweet.

The story of Cilka was one of the most questionable part of "The Tattooist of Auschwitz". Read the whole fact-checking review of the book: https://t.co/hioNswY2nT https://t.co/QHFwv0MJUn

But for Morris, the new sequel about Cilka, titled “Cilka’s Journey,” is another romantic and sexy story of love, hope and survival, in the most desperate of circumstances.