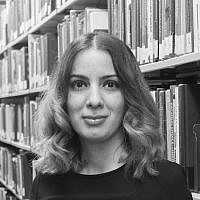 The Blogs
Shermeen Yousif
Apply for a Blog
Advertisement
Please note that the posts on The Blogs are contributed by third parties. The opinions, facts and any media content in them are presented solely by the authors, and neither The Times of Israel nor its partners assume any responsibility for them. Please contact us in case of abuse. In case of abuse,
Report this post.

In light of the recent disturbing Iraqi anti-normalization law, and the tumbling efforts to form a new government after 9 months of elections, the Iraqi political landscape is undergoing another difficult phase of a failing state. This is happening particularly in a time of changing dynamics, in the aftermath of the Abraham Accords and the joining of four Arab countries to normalize relations with Israel, and speculation of other countries to join in the near future. The Iraqi government is facing the predicament of the polarization between Iran and its Arab counterparts, yet unfortunately, Iraq is leaning towards Iranian politics, which is complicating the situation for Iraq’s future and potentially harming diplomatic relationships with the Arab neighbors.

There is no rationale for this anti-normalization law besides that it represents a silencing tool for any prospective anti-government voices by accusing them of relations with Israel and subjecting them to imprisonment or death, especially since it applies to Iraqis inside and outside the country. It is also an attempt by the Sadrist agenda to “pull the rug” from other Shiite rivals to show fake patriotism at the expense of Iraqis’ interests, while it does harm to Iraq’s diplomatic relations within the current landscape of important neighbors with normalization and peace agreements. The timing of the controversial ‘anti-normalization’ law is particularly problematic, as there was no urgency for the Iraqi government to decide on taking such a stance, especially at a time when negotiations over forming the new government have been pending for eight months, and many other decisions, including re-considering Article 41 that gives the “husband” the right to punish his wife, are much more important to address. The law can be best described as a move of the Sadrist entity to show ultra-nationalism in a troubling political climate. Instead of focusing on the real issues in the country, their move was to defer to external “enemies” like Israel to distract the public from the actual problems, including the governmental failure and deteriorating conditions in Iraq.

When it comes to the public stance with regard to relations with Israel, a generalized statement of “Iraqis do not want normalization with Israel” is elusive. As an Iraqi, I know that since Iraq has undergone very bad decades, we are desperate for change. Pragmatically, Iraqis do not necessarily oppose relations with Israel, knowing that normalization can bring positive change. Yet, the average Iraqi has always been afraid and reluctant to express their support for relations with Israel. The older law, the 1969 penal code that prohibits association with the “Zionist entity” and cites imprisonment (and possibly death penalty) for any communication, still resonates with Iraqis to the point that they hesitated to voice Israeli-supporting views even after the 2003 war. The Iraqi constitution of 2005 is supposed to protect freedom of expression, yet, on the ground, Iraqis, especially those inside Iraq, fear expressing support for Israeli-Iraqi relations. And now, with this anti-normalization law, no one can actually voice such a support, which is really disturbing. However, in a country like the U.A.E., after their full normalization with Israel, the Emirate people showed friendly and positive reactions. Iraqis are not really different from the Emiratis; if the Iraqi government joined the Accords, we could expect a similar support for normalization.

In the fall of 2021, a conference was held in Erbil to support Iraq’s joining the Abraham Accords. The conference was denounced by the Iraqi government, threatening its participants and initiating arrests and trials. It is logical to assume that if the government had not threatened the participants, we could have seen more initiatives that support normalization with Israel. Iraqis have become aware that current Iran-controlled policies are not serving Iraq and that seeking other relations is potentially advantageous.

Importantly, this anti-normalization law represents a problematic deterioration of human rights in Iraq, an accumulation of multiple attempts to strip Iraqis off from freedom of expression, and face government-opposing views with different forms of human-rights violations. In order to counteract the protest movement (2019–2021), a vicious assassination campaign was launched against activists, journalists, and opposing voices. Overall, in the past two decades in Iraq, a transition from democracy to autocracy, and more recently to authoritarianism, has gradually occurred. Voicing a critical stance against the Iraqi government has been counteracted with silencing, threatening, imprisonment, and killing. The exclusivist polarized state is heading towards a dictatorship era.

It is really important to differentiate between the Iraqi government and the Iraqi citizens; while the former is a corrupt entity that seeks its own interests by allying with Iran, the latter has been clearly anti-Iran, opposing the state at many levels. Citing the Iraqi government’s legislation as representative of the public will is problematic. This anti-normalization law is merely a governmental decision and does not represent nor serve the Iraqi interests. It is another Iran-made move. The legislation is a human rights violation and a step further towards tyranny and an authoritarian regime.

About the Author
Shermeen is an assistant professor, a female academic who witnessed women’s rights issues within the civil unrest of post-war Iraq, escaped to the United States and earned a doctorate degree. She is an activist and a writer who focuses on social and political change in Iraq and the Middle East, as well as feminism and increasing awareness of women’s rights in the region.
Related Topics
Related Posts