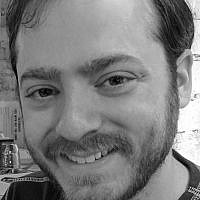 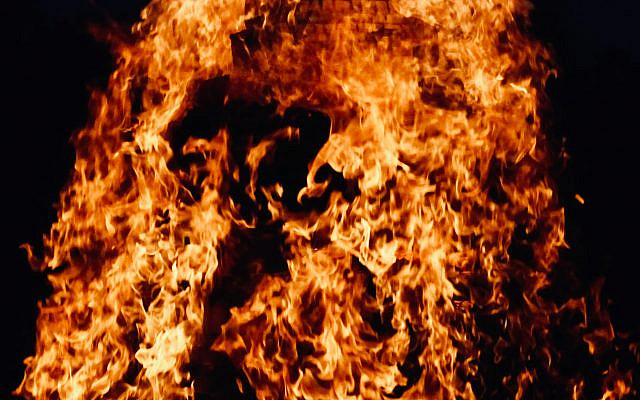 Abraham in the fiery furnace – it’s a story we all know, though it does not appear anywhere in the Bible.  Abraham, or more technically Avram, is thrown into a furnace by King Nimrod after smashing his father’s idols and debating theology with the king. He miraculously survives, but his brother Haran, who vacillates between true belief in the one God and idol worship, dies in the flames.  This event has been understood in a number of ways: a test of faith for Avraham echoing the book of Daniel (3:19-23), what faith should mean for us today, or even a polemic against Zoroastrian fire-worship.

The story is first recorded in mainstream Jewish records in Breishit Rabbah (38:11) but appears with variants in Jubilees (12:12-14), the Biblical Antiquities of Pseudo-Philo (6:16-17), Pirkei D’Rabbi Eliezer (26:1), Maaseh Avraham (ref. here), and even the Quran (Surah 21:67-71).  Each version adds a twist. For example, in Jubilees, the fire is not in a furnace but is caused by Abram burning down Terach’s idol shop, and Haran dies trying to rescue his gods. In Pseudo-Philo, the King is Yoktan, and thousands die, not just Haran, when Avraham survives the furnace explosion.  In Pirkei d’Rabbi Eliezer, Haran first hides Avraham for 13 years to protect him before he is arrested and faces the fire.  Same even came to understand that it was the incident of the fire and Haran’s death that sent Terach to search for a new home and started Avraham’s journey to Canaan.

No matter how you read it, though, Avraham plays a role in Haran’s death.  He is implicated in every story in one way or another, and Sha’ar HaGilgulim, a Kabbalistic work by Rabbi Hayim Vital, picks up on those implications. The book, as the name suggests, explains the Jewish version of the mechanics of reincarnation and traces the gilgulim (reincarnations) of souls between Biblical characters. It sees Haran as the gilgul of Hevel (Abel) and Aharon as the gilgul of Haran (38:184).  In the first framing, it understands Haran’s death as atoning for Mankind’s initial turn to idolatry, but perhaps more importantly, we should note that Haran and Hevel both die at their brother’s hand.  Furthermore, Aharon, whose name is א+הרן, is seen as the next gilgul since his role in the incident of the Golden Calf led to the death by fire of his sons, Nadav and Avihu (Sha’ar HaGilgulim 33:10).  The connection between the two incidents is further highlighted by the commentators (e.g. Ibn Ezra) who note the phrase על פני in both instances– that Haran, like Nadav and Avihu, died in the presence (or according to others, lifetime) of his father.  And who was the cause of this death in the case of Haran? His own brother, Avraham. [1]

Beyond being forced to leave Ur Kasdim, what other impacts might such fraught events have had on Avraham?  Rabbi Zvi Grumet has posited that Avraham fuses three important qualities: familial loyalty and care from his father Terach, and tzedek and mishpat (justice and righteousness) from Shem and Ever – a point highlighted in Breishit 18:19.  But was Avraham really only channeling family loyalty in later interactions with his family?  Or did Avraham act out of guilt over his brother’s death?  A guilt that could have driven him out of Ur Kasdim and even his father’s house.  A guilt that would drive him to protect Lot at all cost.  A guilt that perhaps would even push him to marry Haran’s daughter, Yiskah, if she is in fact Sarai (see Rashi).

Three times in Breishit we see interplays between Avraham and fire: Brit Ben HaBetarim (the Covenant between the Parts), Sodom, and the Akeidah. Each time fire is a test, a symbol of death, and perhaps a trigger of Avraham’s own trauma or guilt.  At the Brit Ben HaBetarim, after God reminds Avraham that he saved him from Ur Kasdim, the purported location of the furnace, a great dread falls upon Avraham and the skies thicken with smoke as the “leaping flames of the smoking furnace” dance before him (15:17). At Sodom, again, Avraham only has eyes for the smoke, the furnace he cannot leave behind (19:28). [2] But this time at least, he successfully saves Haran’s son Lot.  The same Lot whom Avraham again and again calls his brother.  Lot whom Avraham takes with him everywhere, protects, enriches, and saves not once, but twice.   Avraham’s penance, to forever be his brother’s keeper.  This brotherly love underscores perhaps the most ironic line in Breishit, given the sibling dynamics in the rest of the book.


“Let there not be dissension between us or our shepherds, because we are each other’s brother.”  (13:8)

Brothers should avoid fighting, right? Yet, while Avraham atones for himself and Cain, his guilt is never ending and neither is the compassion and chesed which stem from it.

What does this mean for the tests involving his sons?  Being commanded to banish Hagar and Yishmael (twice!) could not have helped but invoke Avraham’s own inherent need to protect and care for his family at all costs, not to mention echoing his own father’s facing his son’s death.  But Avraham also struggles with defining what constitutes his family. Must he prioritize Sarai, and later Yitzchak, over Hagar and Yishmael?  And even so, how can he be responsible for harming them?!   This question becomes even more poignant at the Akeidah, when he must offer up his ‘main’ son in fire.  Can he truly face the flames and overcome his trauma?  One telling detail in the Akeidah may provide a clue: despite the flint (lit. אש, fire) being mentioned over and over and despite the text’s detailing of Avraham’s methodical building of the altar and binding of Yitzchak (22:9), the fire is never mentioned as being lit.  Perhaps that is one step too far for Avraham.  Yet, the midrashim tell us that it is as if Yitzchak was in fact burned on the altar, and his ashes become a common motif in Jewish thought [3].  Avraham may have withheld his hand, but in his tearful gaze Yitzchak has already been consumed in the fiery trauma, his ashes intermingled with Haran’s.

Post-Moriah, this intergenerational trauma is now fated to be passed down. Yitzchak flees to his brother Yishmael in Be’er L’chai Roi after his binding, perhaps to commiserate with his brother who had also faced near-death due to their father. [4]   Yitzchak’s eyes are weakened by witnessing their shared trauma, and this trauma echoes through a series of painful events down to Ya’akov and Eisev, and from there to Yosef and his brothers. [3][5]  And it all started with Avraham taking a stand in Ur in defense of monotheism; this is the cost he pays time and again in his trials, putting God above family. [6]

And if that was the lesson of this story, that would be a tragedy.

Working out this trauma is the underlying theme of the rest of the book of Breishit, and it echoes far beyond, through Moshe and Aharon, the period of the Judges, the Kingdoms of Israel and Judah, and even the death of the Ten Martyrs.  Yet, it’s the guilt itself that initially arises from this trauma that presents a new solution to the challenge of humanity’s creation. After the sin in the Garden, Chava and Adam blame others for their downfall.  Cain cannot bear the burden of his guilt, and the generation before the Flood does not even feel guilt as they fill the land with violence. Noach was righteous, but he wallowed in his guilt after the Flood, where his guilt turns to drunken shame.  On the other hand, God recognizes in Avraham’s response to his own trauma and guilt a new response by humanity – one of taking responsibility for the harm caused and then being driven to act upon those feelings positively and prosocially. [7]  By transforming guilt into acts of chesed, Avraham showed grace through proactive, unconditional compassion and kindness. In fact, we can understand from the midrash that it was this very response that drew God to Avraham in the first place.  Avraham will indeed pass down lessons of righteousness and justice to his children, per God’s charge, but above all, he is their model of chesed.  From out of the furnace, Avraham emerges as the father of Jewish guilt but as his children we also inherit this strongly-forged sense of unequivocal responsibility for our brothers and sisters.

כל ישראל ערבים זה בזה
Every Jew is responsible for one another
and from that root
עולם חסד יבנה
the whole world will be built up from that chesed,
the chesed of Avraham.

—
[1] Note too the parallel with Moshe, the brother of Haran’s gilgul, who had to flee after killing the Egyptian in Shemot 2:14.
[2] In contrast with Lot’s wife perhaps as discussed here
[3] Dr. Aviva Zornberg’s The Beginning of Desire: Reflections on Genesis p.155-160
[4] Rabbi Shmuel Klitsner’s Wrestling Jacob p.45
[5] At Brit Ben HaBetarim, God indicates that the trauma will take generations to process, both for it to be overcome but also for its lesson to be fully learned in the iron blast furnace of Egypt (Deut. 4:20) and at Mt. Sinai, which smoked like a furnace (Ex. 19:18). See Ramban there who makes the initial connection.
[6] In fact, one can read all ten of Avraham’s trials as tests of his chesed specifically attuned to his personal trauma. The Zohar, commenting on this, notes that the role of the Akeidah specifically was to blend chesed/water with gevurah/fire, the latter a trait/element Avraham lacked (or eschewed?) until now. Whether God was trying to “balance” Avraham or test the limits of his chesed, this matter requires further exploration.
[7] On some of modern psychologies understanding of the positive power of guilt checkout this article.